The Sharks proved too strong for the Lions and claimed a 42-5 win over their hosts in a one-sided Super Rugby encounter in Johannesburg.

The visitors were full value for their win as they were the dominant side for long periods and a superb first-half performance laid the platform for this win.

Everything the Durban-based outfit tried seemed to come off during the opening stanza and they held a 25-0 lead at the interval.

They eventually outscored the Lions by six tries to one with Makazole Mapimpi scoring a brace and Jacques Vermeulen, Lukhanyo Am, Thomas du Toit and Aphelele Fassi also crossed the whitewash. The Sharks’ other points came courtesy of a penalty and a conversion from Robert du Preez while Curwin Bosch also succeeded with two conversions and a penalty.

By contrast, the Lions looked a pale shadow of the side who came into this match as the leading side in the South African Conference. They conceded numerous turnovers and made a plethora of unforced errors and a late Sylvian Mahuza try was all they had to show for their efforts.

The Sharks hit the ground running and after Lions lock Rhyno Herbst was yellow carded in the 11th minute, the visitors opened the scoring courtesy of a well-worked Jacques Vermeulen try.

After that score, the visitors had a bulk of the possession and spent most of the half camped inside the Lions’ 22 thanks largely to the efforts of Bosch, who crossed the gain-line at will with several outstanding runs from the back.

One of those carries tore the home side’s defence to shreds and he did well to get a pass out to Mapimpi, who outpaced the cover defence on his way over the try-line.

The visitors continued to dominate and five minutes later Am made a telling break before scoring under the posts and after Du Preez added a penalty on the half-hour mark, Mapimpi crossed for his second try just before half-time after gathering a long pass from Louis Schreuder.

What made matters worse for the Lions is that just before half-time torrential rain came down which made handling and under-foot conditions more difficult.

Despite the weather, the Sharks continued to dominate and extended their lead via a long range penalty from Bosch shortly after the restart.

That was followed by Du Toit’s try in the 72nd minute before Mahuza scored a consolation try two minutes later.

The Sharks finished stronger though and sealed an emphatic win when Fassi scored their final try just before full-time. 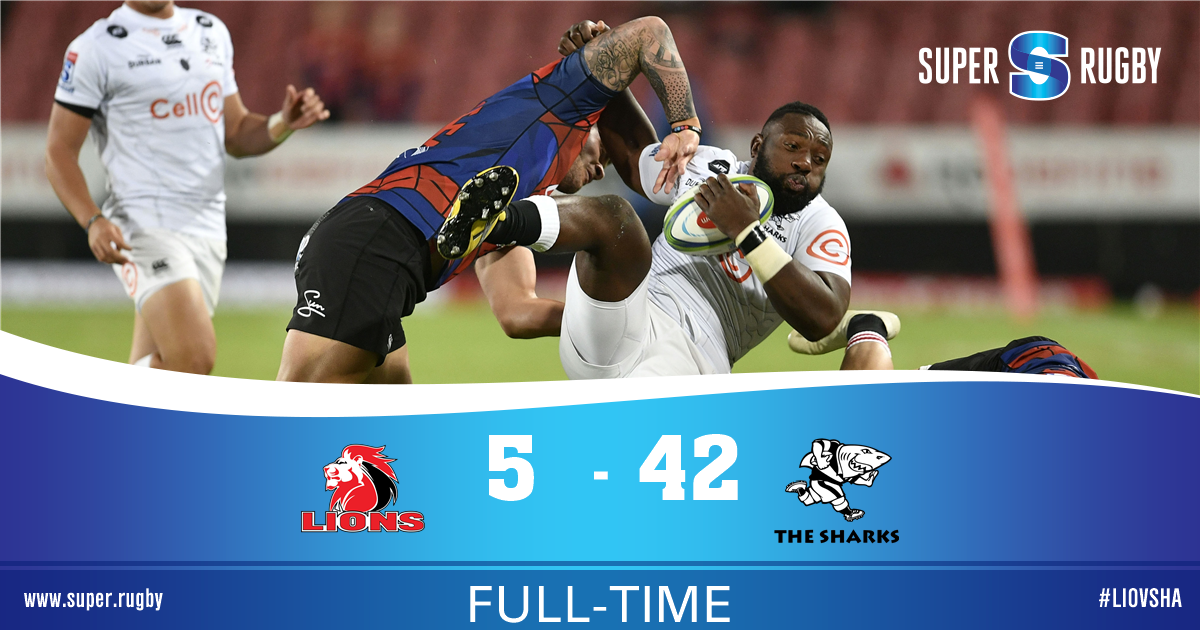