Mitch Hunt scored a last-minute try before kicking the conversion as the Crusaders secured a 21-21 draw against the Sharks in Christchurch on Friday.

Although the home side outscored their visitors by three tries to none, the Sharks were in the lead for most of the match and were on course to secure an unlikely victory until Hunt's last-gasp heroics.

In the end, the Crusaders fly-half finished with an 11-point haul as he also kicked three conversions, with his team’s other points coming via tries from Codie Taylor and Jack Goodhue.

The result ends a 25-match winning run for the Crusaders in Christchurch.

The match started brightly for the visitors and even though Bosch struck an upright with his first shot at goal, he made up for that miss when he landed a penalty in the eighth minute to open the scoring.

The Crusaders did not take long to respond though and three minutes later Taylor crossed for their opening try from close quarters after Jordan Taufua and Braydon Ennor carried strongly in the build-up.

Hunt added the extras which gave the home side a 7-3 lead but despite conceding that try, the Sharks did well to keep the champions at bay during the rest of the half, and two further penalties from Bosch meant the Sharks had their tails up at the break with the score 9-7 in their favour.

The visitors were fastest out of the blocks in the second half and they held a 15-7 lead by the 50th minute after Bosch added two further penalties.

The Crusaders needed to respond and that came in the 56th minute when Goodhue crossed the whitewash after gathering a perfectly-weighted pass from Kieran Read deep inside Sharks territory.

Hunt’s conversion was successful which meant the visitors were holding a one-point lead but the Sharks struck back with another penalty from Bosch in the 69th minute.

Bosch lined up another penalty in the 72nd minute but his long range effort was off target. He made up for that miss when he landed his seventh penalty two minutes later but it was not enough for the win as Hunt’s late try secured the draw for the hosts. 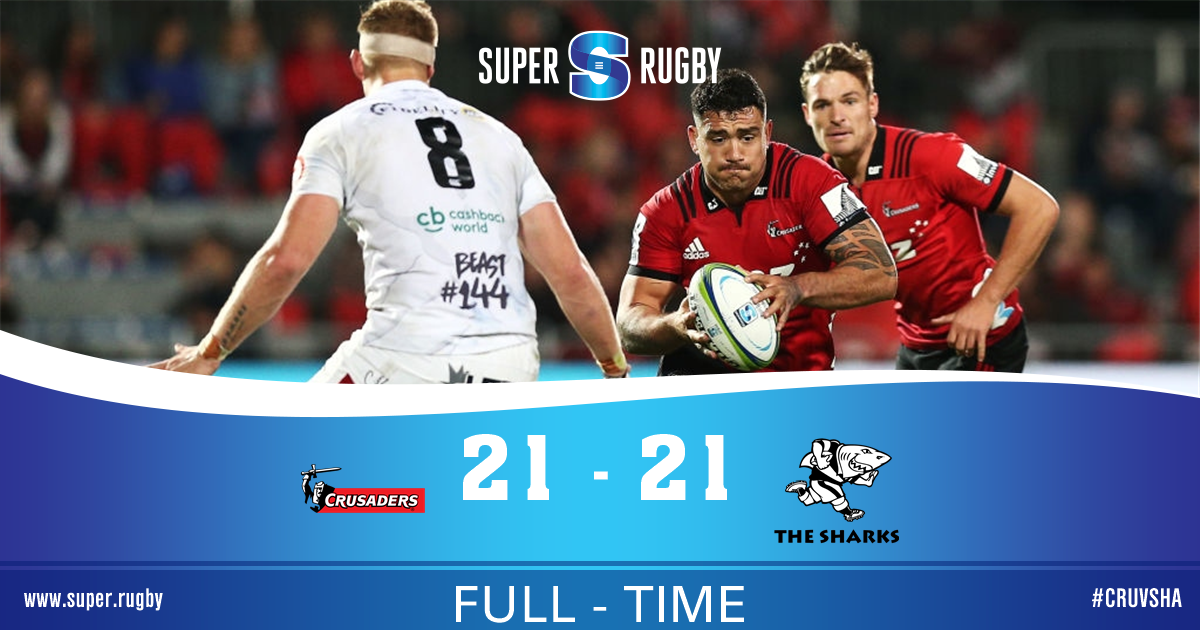