The Chiefs sealed just their fourth win of the Super Rugby season as they beat the Sharks 29-23 to move off the bottom of the New Zealand Conference.

The victory puts them above the Blues, who are currently on a bye, while a losing bonus-point takes the Sharks top in South Africa.

Brad Weber bagged a brace, while Mitch Karpik and Anton Lienert-Brown also crossed for the home outfit and Marty McKenzie nailed nine points off the kicking tee. In reply, the Sharks’ try scored via Hyron Andrews and Ruan Botha, with Curwin Bosch slotting 13 points for his side in a narrow defeat.

The Chiefs went into the break leading 17-13 after an error-strewn first 40 that saw the visiting Sharks making far too many handling errors.

McKenzie got the ball rolling on 10 minutes with a penalty after the Sharks had strayed offside. The South Africans then had plenty of chances to strike back in the opposition red zone but knock-ons cost them dearly.

The Chiefs were having no such issues and scored their first five-pointer on 27 minutes. The try-scoring play began with prop Atu Moli’s line-breaking carry before McKenzie also got through and found Sean Wainui, who laid it off to Weber for the seven-pointer.

The Sharks finally put points on the board soon after as Luke Jacobson’s ruck offence led to Bosch chipping away at the lead, and then scored their first try to level the scores at 10-10 when Andrews galloped over after Solomon Alaimalo couldn’t hold a high kick and it found its way to the lock.

Colin Cooper’s charges managed to regroup and a line-out move in the away 22 led to Karpik darting over against a disorganised Sharks defence. Cushioning that blow somewhat for the Sharks was Bosch slotting three points before the break to make it 17-13 to the New Zealanders.

Jacobson, the man pinged for that Bosch effort, made amends early in the second period to earn a penalty ruck time but McKenzie was wayward this time.

The Sharks were then given a lift when Chiefs hooker Nathan Harris was yellow carded for a cynical offence on the ground in his own 22, handing the visiting team an attacking line-out against 14 men. And it took then no time to capitalise, Botha dotting down to put his side 20-17 up.

That became 23-17 just after the hour mark thanks to the boot of Bosch, after the Chiefs illegally brought down a maul 40 metres out.

But the Chiefs showed resolve to land a double blow late on, with several phases leading to Lienert-Brown crossing for a patient try, before Alex Nankivell’s fine break took him over the halfway mark and Alaimalo found Weber, who scored his second try of the evening to move the Chiefs 29-23 in front.

That was how the game ended as despite a late spell of possession the Sharks could not get into the 22 and fumbled as the Chiefs held on. 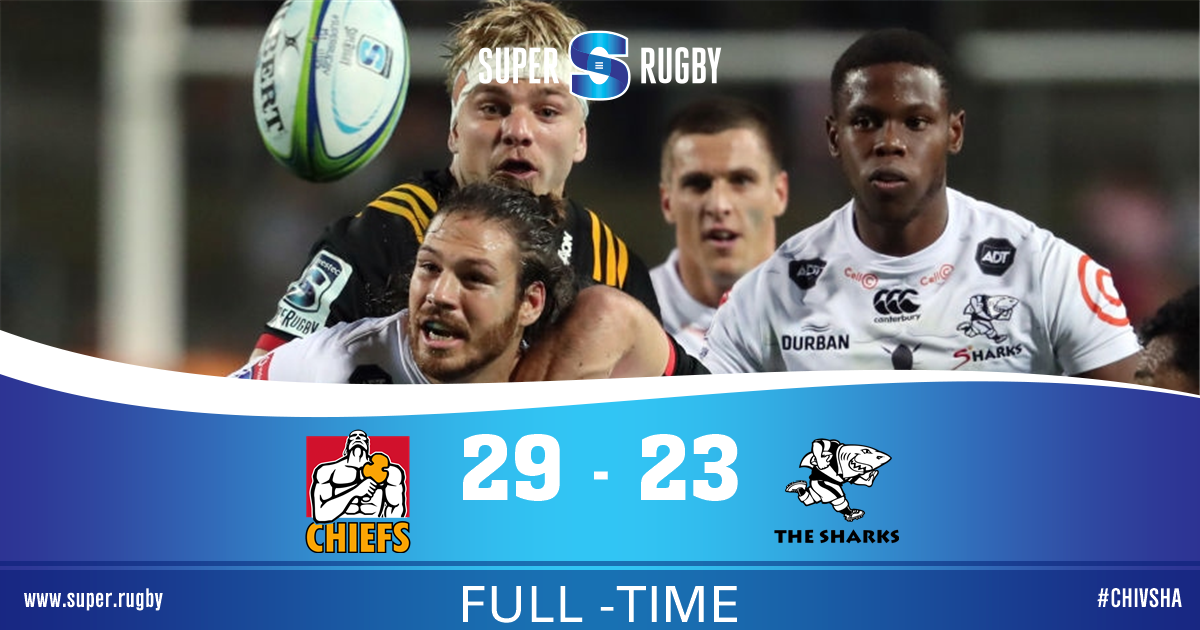