Stormers back on track with impressive win

The Stormers ended a two-match run without a win with an impressive performance to comfortably beat the Highlanders 34-22 at Newlands.

The opening exchanges of this encounter are not something that either side will look back on with pride. The first 10 minutes were punctuated by aimless kicking from both teams and a number of handling errors that just made it all feel very clumsy.

The home side was shocked out of their lethargy around the quarter-hour mark when Seabelo Senatla rushed onto a deft chip through from Damian De Allende, but the try was correctly ruled out as he was ahead of the center when he made the kick.

This was quickly followed by a charge into their half from the Highlanders and Marty Banks opening the scoring from the penalty spot in the 18th minute.

It spurred the Stormers into action almost immediately with a brilliant backline move spearheaded by Senatla cutting in off his wing at just the right time to burst through a hole in the defense before offloading to the supporting Herschel Jantjies for the first try of the game.

The referee also sent this one upstairs to be checked, but there were no problems this time around and the extra points were added by Joshua Stander.

Unfortunately, after the try, the teams began to play another match of kicking tennis. This time the home side were a little more successful with their kicking and the territory gained earned them another three points in the 25th minute through the boot of Stander in the 25th minute.

Things went from bad to worse for the visitors when Matt Faddes picked De Allende up in a tackle, turned him past the horizontal point that referees are so protective of and dropped him on his head, earning himself a yellow card.

Sensing the blood in the water, the hosts went in all guns blazing but were consistently rebuffed by an organised and robust defensive line.

That is until the 34th minute when De Allende's deft offload to Siya Kolisi was just one step too much for the Highlanders to cover and the Stormers captain burst through the gap to extend their lead to 17-3 after Stander added the conversion.

The Stormers spent the rest of the first half camped in the Highlanders half, but were unable to add to the score.

After the break, the Highlanders were a completely different beast and took the game to the Cape side right from the kickoff.

A series of desperate defensive kicks under pressure meant the Stormers were unable to get out of their own half for 10 minutes after the restart, but they did not concede any points.

Senatla broke the tension when he somehow emerged from a throng of players with the ball on the Highlanders side of the breakdown to trot over the line and dot down. However, video evidence showed Stander had knocked the ball on and the try was not allowed.

The home side's resilience broke in the 51st minute after Shannon Fritzell made some ground with a strong leg drive before laying the ball off for Aaron Smith to throw it out wide for Patelesio Tomkinson to go over for the visitor's first try, which was converted by Banks.

Unfortunately for the Highlanders, their joy was incredibly short-lived. The Stormers hit back straight away with Dillyn Leyds seizing on a poor clearance from Smith and bursting into space before offloading for Cobus Wiese to go over for the try. Stander once again added the extras to move the score to 24-10.

Jean-Luc Du Plessis took over the kicking duties for the Stormer when he came on as a sub and extended their lead to 27-10 with a 62nd-minute penalty.

While they never really threatened to win the game, the Highlanders were constantly letting the home side know that they should not relax at any point.

This was shown in full effect when, against the run of play, they showed some amazing handling to see the ball all the way through the backline to making an overlap for Naholo to score and bring the score to 27-15 after the conversion was missed.

But the home side was always pretty good about heeding the warnings offered to them and once again answered back almost immediately. De Allende once again the creator, breaking the gain line before setting the ball up for du Plessis to go over in the corner. The conversion was missed and the score moved to 34-15.

The Highlanders had the last say in the game with Siate Tokolahi eventually bashing his way over the whitewash well after the final hooter had sounded after they had been pressuring the Stormers line for a good seven minutes. The conversion made it 34-22 and there were no celebrations from the New Zealanders after they'd scored the consolation. 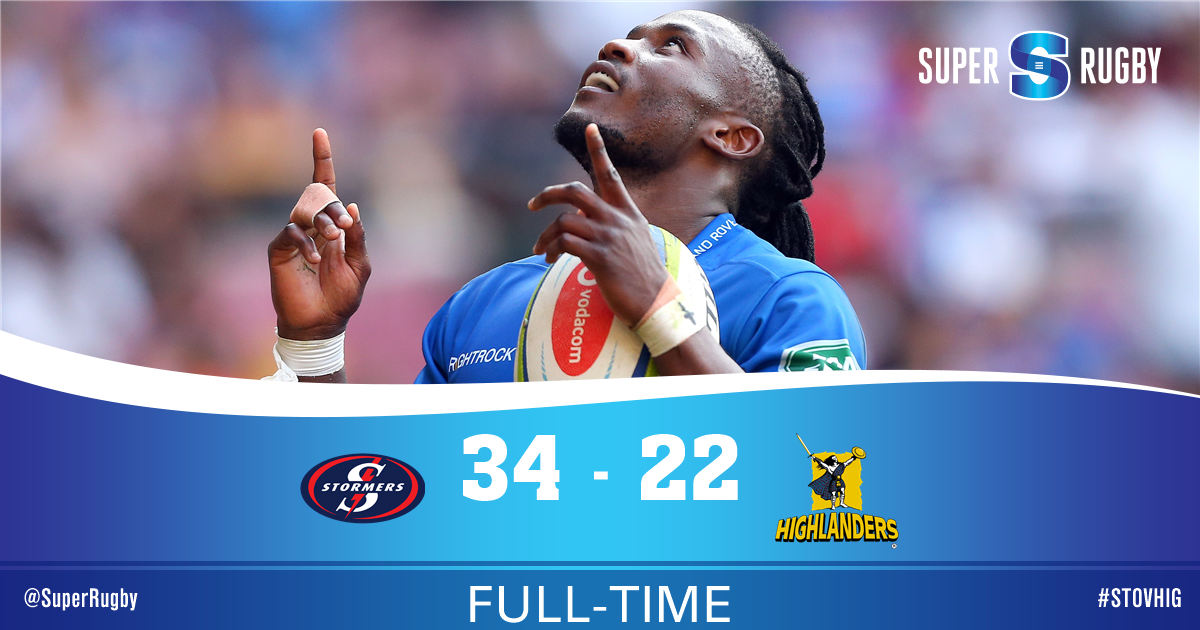