The Crusaders clinched their third successive Super Rugby title - and 10th overall - with a clinical 19-3 victory over the Jaguares in Christchurch.

Though they were tested at times, the powerhouse New Zealand outfit were deserved winners on the night, committing less unforced errors while taking full advantage of their opponents' ill-discipline and crossing for the only try of the match.

Richie Mo’unga's accurate boot ensured a comfortable win in the end, as he kicked four penalties to keep the Jaguares at bay.

The opening exchanges were evenly contested with both teams spending time inside their opponents’ half, and even though the Crusaders held a slight edge in the territorial and possession stakes, a few too many turnovers kept the Jaguares in the match.

And it was the visitors who opened the scoring in the 16th minute via a Joaquin Diaz Bonilla penalty after Bryn Hall infringed at the base of a scrum 15 metres inside the Crusaders’ half.

With points on the board, the game opened up and the Jaguares did most of the attacking during the next 10 minutes.

There would be no reward for their efforts, however, and that proved costly in the 25th minute when Codie Taylor crossed for the game's only try.

Matt Todd did brilliantly to win a turnover midway between the halfway line and the Jaguares’ 22, before quick hands from Kieran Read got the ball out to Sam Whitelock. The Crusaders captain set off towards the tryline before throwing an inside pass to the onrushing Taylor, who shrugged off a desperate tackle from Tomas Cubelli before crashing over.

Mo’unga added the extras but despite that setback the Jaguares continued to attack and ask plenty of questions of the home side’s defence.

In the 37th minute, the men from Buenos Aires came close to scoring a try when a brilliant offload from Pablo Matera found Matias Moroni in space down the right-hand touchline inside the Crusaders’ 22. He cut infield, but a superb double-tackle from David Havili and Hall knocked the ball from his grasp as he was crossing the tryline.

That missed opportunity proved costly for the visitors as another Mo’unga penalty on the stroke of half-time gave the Crusaders a 10-3 lead at the interval.

The Jaguares continued to attack after the break and two minutes into the half they came close to scoring when Matera and Moroni combined brilliantly again deep inside the champions’ half, with only a clutch tackle from Jack Goodhue on Moroni preventing a certain try for the winger.

The rest of the half was an arm wrestle, with the visitors continuing to hammer away at the Crusaders’ tryline only for the champions’ defence to hold firm.

The home side also had a few fine moments on attack and in the 51st minute a quick tap penalty inside the Jaguares’ caught the visitors by surprise. The Crusaders set up a driving maul and crossed the whitewash but Todd could not ground the ball under a mass of bodies.

Shortly afterwards, Mo’unga added another penalty and although the Jaguares continued to create try-scoring opportunities as the half progressed, they failed to add to their points tally.

In their rush to haul in the champions, the Jaguares also continued to make errors, and whenever it was in goal-kicking range, Mo’unga punished them.

The All Blacks pivot slotted another three-pointer off the kicking tee on the hour-mark and all but secured the trophy with his fourth penalty of the night in the 75th minute, as the Crusaders further underlined their reputation as the most successful side in Super Rugby history. 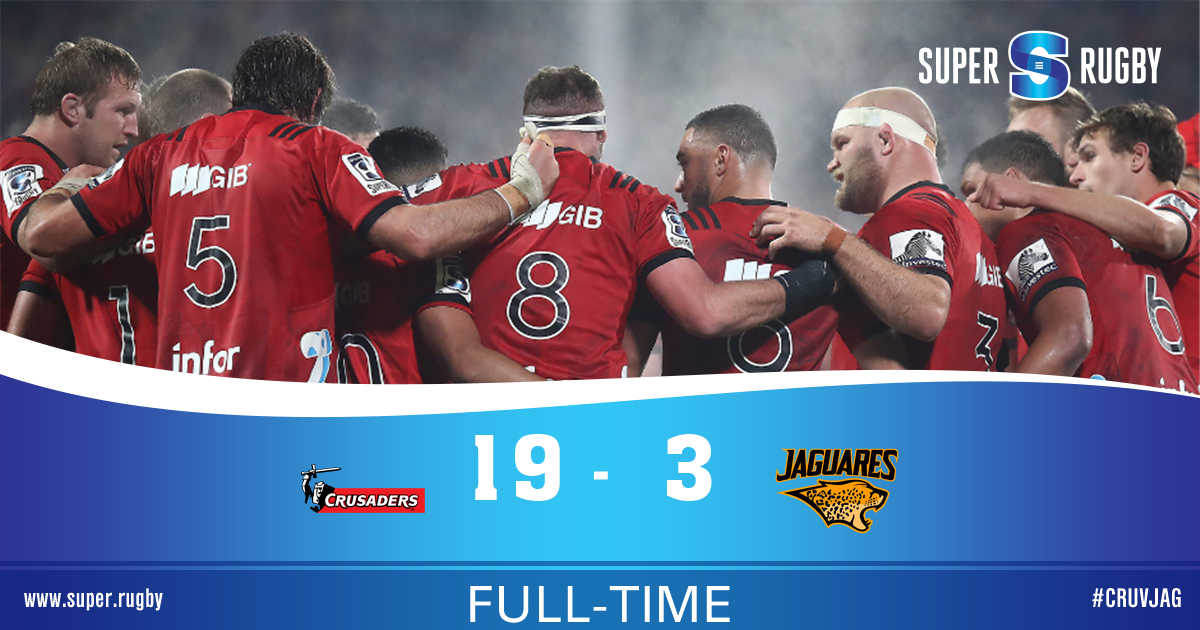