The Hurricanes produced a stunning performance to end the Crusaders’ incredible 36-match unbeaten home record with a 34-32 triumph in Christchurch.

In a gripping contest between two outstanding sides, the Canes deservedly did enough to claim a remarkable win and keep the Super Rugby Aotearoa competition alive. They were up for the fight throughout and Wes Goosen’s two tries, combined with three Jordie Barrett penalties, gave them a 21-17 lead at the interval.

Richie Mo’unga - who also scored seven points off tee - and George Bridge both touched down to keep the Crusaders in the contest going into the second period, before the flyhalf reduced the arrears further after the break.

At that stage, Scott Robertson’s men usually increase the intensity and pull away in the final quarter, but on this occasion the Wellington outfit scored twice via the boot of Barrett and Umaga-Jensen’s try.

The Saders did finally click into gear and crossed the whitewash through Quinten Strange and Sevu Reece, but a late penalty kick from the Hurricanes fullback proved crucial as they stunned the 10-time Super Rugby champions in their own backyard.

The Canes had rediscovered the winning feeling going into this contest and their confidence was evident in the early stages as they opened the scoring via the boot of last week’s match-winner Barrett.

It was the ideal start as the visitors began with intent and physicality, but that was soon matched by the hosts, who began to dominate the scrum battle and levelled matters through their flyhalf. They then earned field position following further pressure up front and duly scored the first try of the game thanks to the excellence of Jack Goodhue.

There was plenty of intrigue going into the encounter as two prospective All Black centres went head-to-head. Ngani Laumape was in outstanding form last week against the Blues and signalled his intent with an early charge, but it was the Saders man that went 1-0 up.

Receiving the ball a few metres out from the line, Goodhue drew in the defence – including the visiting 12 – and brilliantly off-loaded for Mo’unga to finish.

With a seven-point buffer, the South Islanders could have pulled away, but the men from the capital hit back when Laumape showed that he’s not just a powerhouse ball-carrier. This time, the 27-year-old’s dexterity was in evidence when his slick pass sent midfield partner Peter Umaga-Jensen charging through a hole, which allowed Goosen an easy run to the line.

Jason Holland’s charges had responded excellently and they were boosted further by a second Barrett three-pointer, but the full-back was to undo his good work a minute later.

Superb interplay between Bryn Hall and Reece had seen the wing surge through the heart of the opposition rearguard before his long pass was kicked ahead by Bridge. The Canes man was covering but was caught unawares as he ambled back, giving the nine-times capped All Black an opportunity to touch down.

Unperturbed, the Hurricanes responded through Goosen’s excellent finish after the ball was shifted wide, before Barrett extended their buffer on the stroke of half-time with another penalty.

The ferocity continued in the second period but the visitors’ discipline went awry as Mo’unga reduced the arrears to one point. They then suffered a further blow when Laumape went off with an arm injury, but it didn't stop the Wellington outfit, who maintained their intensity in defence.

Ben Lam, on his final game for the franchise before joining Bordeaux-Begles, put in a huge tackle which earned a penalty and enabled Barrett to restore their four-point buffer.

It was a passage of play that gave the Hurricanes the momentum and they would increase their advantage after Vince Aso stepped outside of Joe Moody and passed out to Umaga-Jensen to score.

The expected onslaught hadn’t arrived, mainly thanks to a brilliant Hurricanes effort, but the hosts gave themselves hope through Strange’s close-range effort.

That was dampened by another successful Barrett kick off the tee but the Crusaders finished strongly and Mo’unga’s break was finished by Reece out wide.

The No 10 had a chance to equalise but the difficult conversion missed the target and the Canes deservedly held on for a famous victory to move into second position in the table. 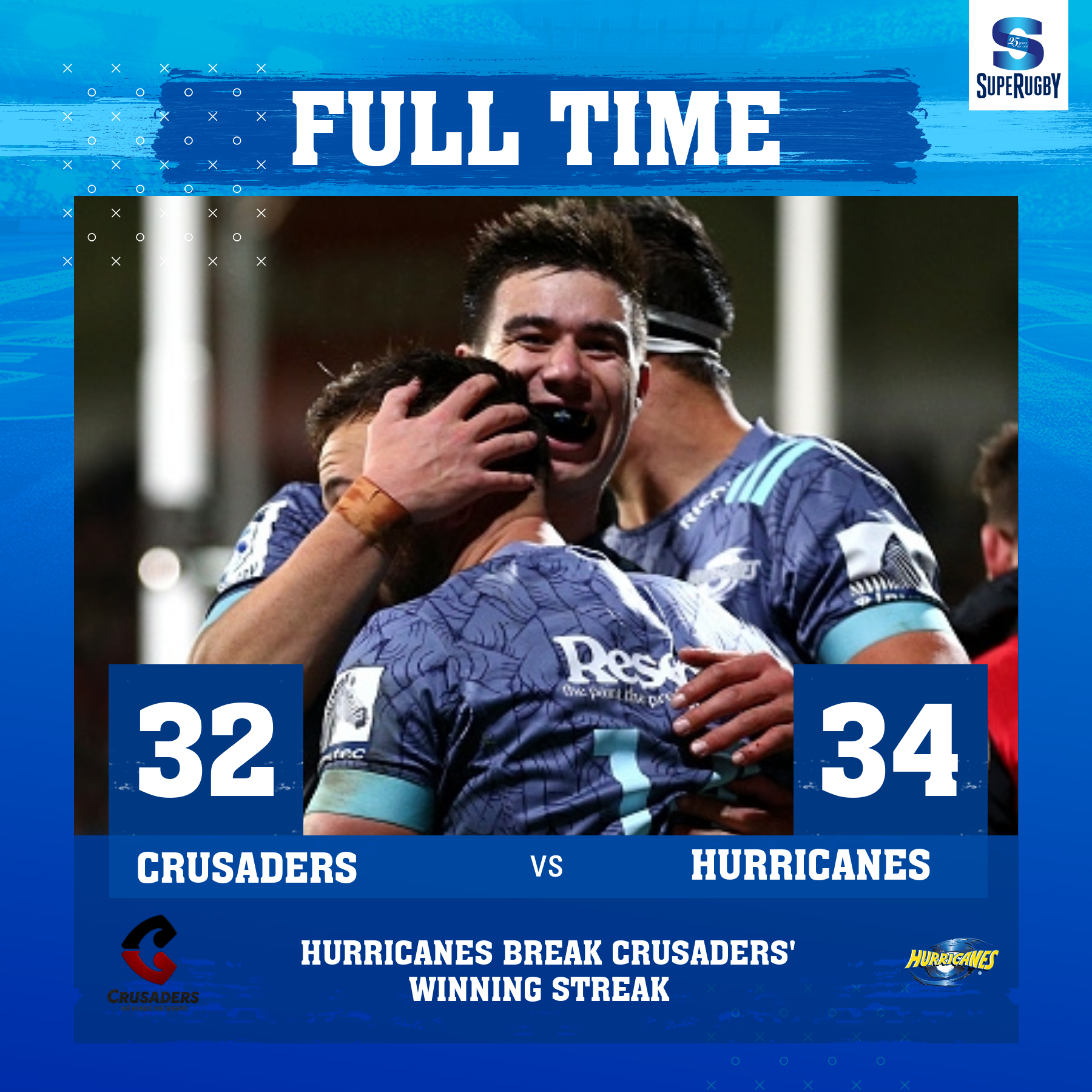