The Crusaders bounced back from last week's Super Rugby Aotearoa defeat with a 32-19 triumph over the winless Chiefs in Hamilton.

After the disappointment of their last outing, when the Hurricanes visited Christchurch and came away with a rare win, Scott Robertson’s charges responded superbly.

They went 12-0 ahead in the opening quarter via Tom Sanders and Will Jordan tries to take command of the encounter, but the hosts hit back as Lachlan Boshier touched down and Damian McKenzie kicked a penalty.

Codie Taylor then crossed the whitewash before a trio of McKenzie three-pointers kept the home side in contention, but the South Islanders ultimately did enough. A controversial Sevu Reece score, followed by Leicester Fainga’anuku’s effort, proved decisive as it moved the Saders seven points clear at the top of the table.

The attention before the clash may have been on Aaron Cruden, who was making his 100th appearance for the franchise, but it was also a significant milestone for All Blacks great Sam Whitelock.

Featuring in his 150th match for the Crusaders, the second-rower displayed his playmaking qualities by passing in behind for George Bridge to collect. Good hands from Bridge and then Taylor gave Sanders the freedom of the left-hand touchline and Sanders surged down the wing and finished in the corner.

It was a brilliant opening by a side that were stung by their defeat to the Hurricanes last week, which ended a run of 36 unbeaten games at home.

They were determined to right those wrongs and they remained on the front foot, scoring for the second time when a neat line from Jordan saw him cross the whitewash unopposed.

The Chiefs could have crumbled having struggled in the first quarter, but they responded superbly and pressurised the opposition line. Warren Gatland’s men went close several times with short-range carries before Boshier eventually barrelled his way over.

McKenzie then added a penalty to reduce the arrears further but they were dealt a blow at the end of the half when Shaun Stevenson was yellow-carded for a deliberate knock-on. With their opponents down to 14 men, the Saders showed their clinical streak by setting up a maul and charging towards the line, where Taylor was on hand to touch down.

Robertson’s men initially failed to build on that in the second period as McKenzie added another three-pointer with Stevenson off the field.

The Crusaders did, however, miss a golden opportunity when Jordan was put in space. The young fullback should really have passed to his numerous support runners but held on to the ball and excellent cover defence halted the attack.

That profligacy kept the hosts in the contest and there was just a one-point difference heading into the final quarter as two further McKenzie penalties to Richie Mo’unga’s single effort left the game in the balance.

Then came the decisive – and controversial – incident which effectively settled the contest. After looking to surge through a gap, Quinten Strange appeared to knock on before Reece collected and touched down, but the officials decided that the try would stand.

It unsurprisingly angered the Chiefs crowd and left the players frustrated, and the Christchurch outfit typically took advantage of their disappointment to rubberstamp the result when Fainga’anuku went over. 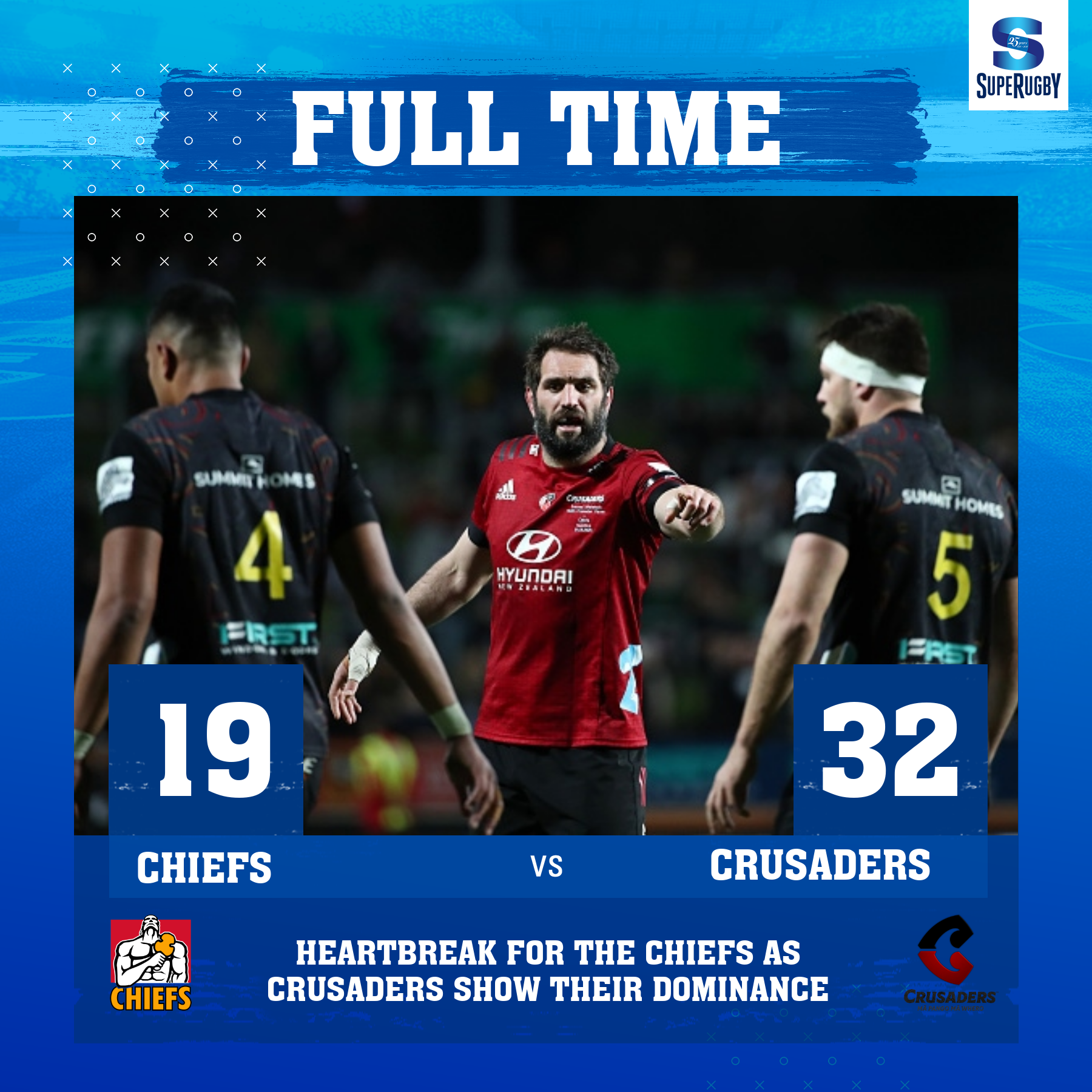