For the second time in Super Rugby AU, the Brumbies snatched victory from the jaws of defeat as Mack Hansen kicked a last-minute penalty to beat the Reds 22-20.

Dan McKellar’s men, who are still unbeaten in Australian derbies since March 2019, initially dominated the clash and front-rower Folau Fainga’a made it 24 tries in 37 games with a first-half brace.

James O’Connor’s penalty was the Reds’ only response before the interval, but quickfire scores via Harry Wilson and Angus Scott-Young altered the momentum in the second period.

O’Connor then kicked his second three-pointer to leave the hosts with plenty to do in the final 10 minutes, but they somehow found a way as Connal McInerney’s try and Hansen’s penalty turned it around.

There is an inevitability in the Brumbies winning these derbies – and doing so via their trusty maul – but they could count themselves slightly fortunate on Saturday.

It was all a bit too easy for them initially as their forwards controlled matters via the drive. The Reds were the latest team to fail in their quest of preventing Fainga’a from adding to his incredible try-scoring tally as the hooker benefited from another excellently set lineout.

Apart from that effort, there was not much else going on as the visitors struggled to penetrate the Canberra outfit’s defence. With O’Connor often standing too deep at flyhalf, it made it all too easy for the hosts, who would soon score for a second time.

Unsurprisingly, it was once again the maul that paid dividends and Fainga’a duly helped himself to another.

It rather typified the game that the first bit of invention, which ended in Jordan Petaia touching down on his return, was correctly ruled out for a high tackle.

After the thrills in New Zealand’s competition comes the spills from their Tasman neighbours and this encounter followed that pattern in the first half, but that changed after the break.

The men from Brisbane were rewarded for their endeavour as they touched down at the start of the second period. It came from a mistake, this time from the Brumbies, when a turnover allowed the visitors to break away, with Wilson eventually crossing the whitewash.

In the number eight, Brad Thorn has a veritable star at his disposal and he came to the fore as the Reds scored for the second time in quick succession.

It was well-worked too when O’Connor – finally taking the ball to the line with authority – found Filipo Daugunu and the wing sent Wilson away. He was taken down just short but Scott-Young was on hand to finish.

All of a sudden, the contest had been enlivened and the Brumbies’ unbeaten run was under severe threat, especially when O’Connor kicked a second three-pointer to open up a 20-14 advantage.

With the Queenslanders also controlling the scrum battle, the hosts’ lack of creativity began to catch up with them. However, two crucial mistakes from the Reds flyhalf opened the door for the Brumbies and, when they kicked into the corner five metres out, there was a familiar ending.

This time it was McInerney who touched down but Mack Hansen’s conversion was awry and left them one point adrift. All the visitors had to do was not do anything stupid but Fraser McReight conceded a needless penalty and Hansen duly nailed the resultant kick to snatch the win. 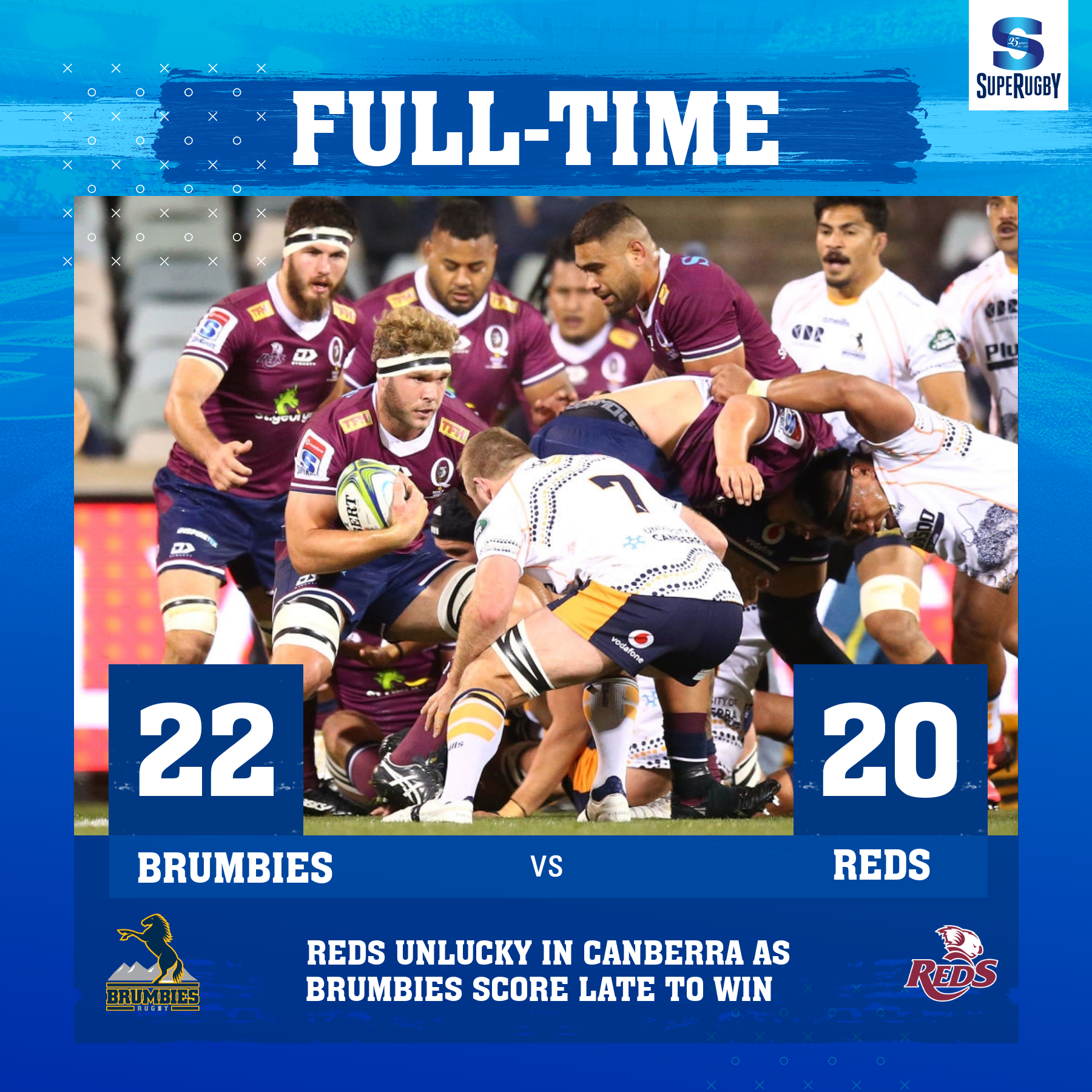