Stormers snatch win from the Pumas

The Stormers pulled off a staggering comeback at Mbombela Stadium in Nelspruit on Friday night as they edged out the Pumas 42-37 in their Super Rugby Unlocked encounter.

The hosts took the early lead as Eddie Fouche slotted a penalty, but the Stormers responded two minutes later with a try when Herschel Jantjies charged down Devon Williams' attempted clearance and Rikus Pretorius gobbled it up to score the try for a 7-3 lead.

A crucial mistake near the Stormers' tryline gifted the Pumas with a great chance as the back-and-forth action continued early on. Juarno Augustus attempted to offload the ball but Neil Maritz intercepted and scored the hosts' first try. The conversion was good and Pumas took the lead 10-7.

Another blunder by the Stormers resulted in a second try for the opposition. Gelant's clearance was poor, giving the Pumas a lineout in the Stormers half. Wayne van der Bank chipped the ball over the top after the lineout and Jeandre Rudolph collected to score. Fouche's conversion made it 17-7 Pumas.

The home team continued putting the pressure on the Stormers and forced another mistake to earn a penalty which was converted for a 20-7 scoreline.

The untidy play from the Western Cape outfit continued as the first half wore on. They gave away another penalty in their own half for a high tackle, and Fouche did his job for the Pumas as they leapt 16 points clear.

There was finally some positivity for the travellers on the half-hour mark as they scored their second try. With penalty advantage on their side, they played it quickly with Du Plessis finding Jantjies with a pass, and he was through for the five points. The conversion made it 23-14 Pumas.

However, the celebrations were short-lived for the away side as the Pumas scored yet another try. Rudolph broke through the defensive line and offloaded to Wayne van der Bank who did the rest, giving the home team a 30-14 lead at the interval.

The Pumas took advantage of another great lineout ball after the break giving Marais the chance to make headway before offloading to Maritz who went over for his second try of the night. The conversion was good, extending the lead, 37-14.

The 23-point gap was reduced to 16 around the hour mark as the Stormers scored their third try of the game. A scrum set up substitute Nama Xaba to get close to the tryline before Fouche finished it off.

The Stormers did not give up despite the deficit, and in the 72nd minute scored their fourth try as a rolling maul from a lineout resulted in hooker Bongi Mbonambi going over for the five points. Swiel converted for 37-28.

An unbelievable comeback was on the cards two minutes later as the Pumas defence suddenly crumbled under pressure. Van der Merwe set it up for Kwenzo Blose with a run down the wing and he in turn passed to winger Leolin Zas who scored. Swiel converted to close the gap to a mere two points!

The sensational comeback was completed right at the death as Gelant went in for the try following another strong maul. Swiel converted to give the Stormers a 42-37 victory after trailing by 23 points at one stage. 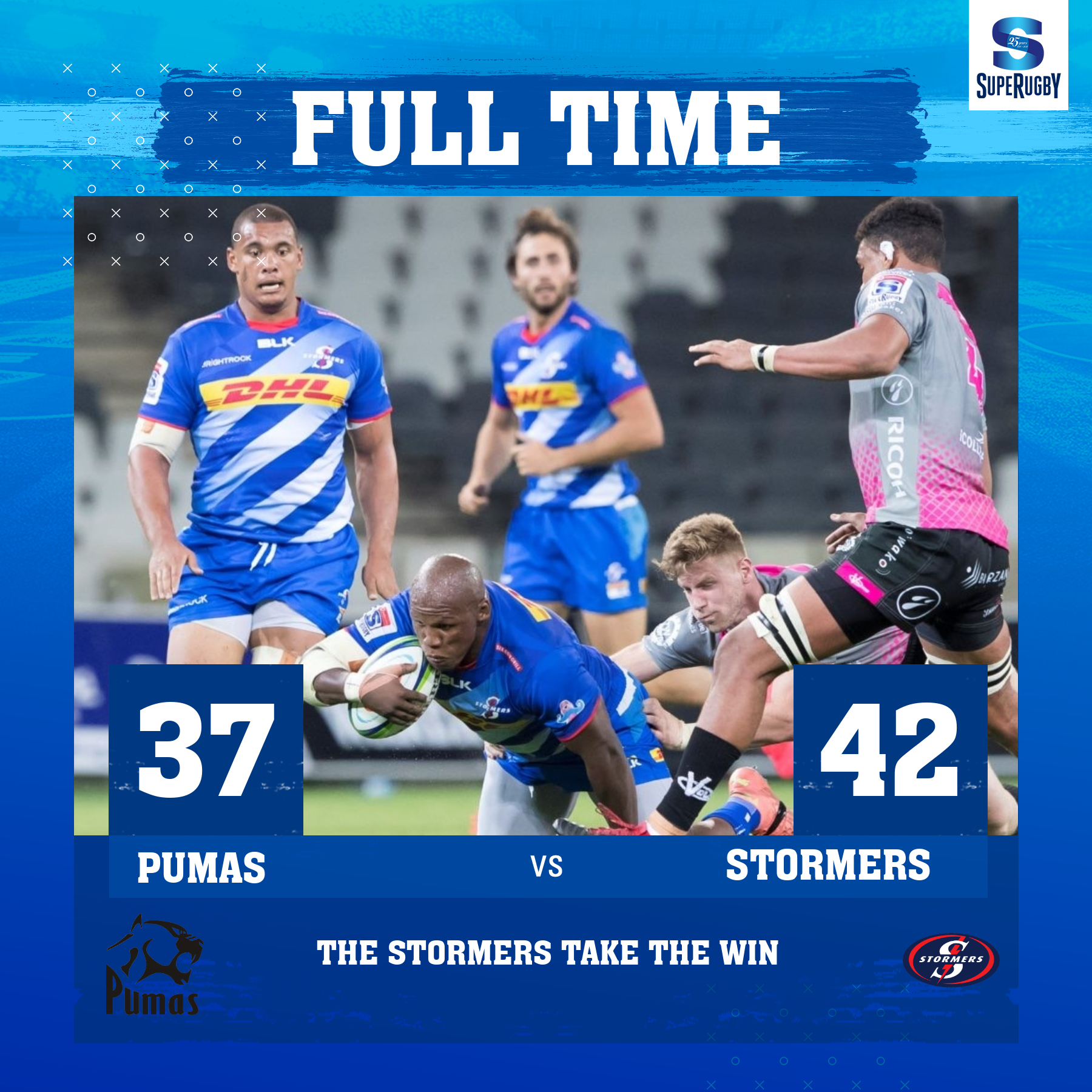