Chiefs steal win from the Crusaders

The Chiefs claimed an impressive 25-15 victory over the Crusaders in Hamilton on Saturday to make it two victories from two at the start of the Super Rugby season.

In a typical New Zealand derby, there was plenty of end-to-end action as momentum between the sides ebbed and flowed throughout. Although the Crusaders dominated the early exchanges, the Chiefs improved as the match progressed and they eventually outscored the champions by three tries to two.

Solomon Alaimalo, Te Toiroa Tahuriorangi, and Sean Wainui scored the Chiefs’ five-pointers while their other points came via the boot of Aaron Cruden, who succeeded with two conversions and as many penalties.

For the Crusaders, Sevu Reece scored a brace of tries and David Havili added two conversions and a penalty.

The champions made a terrific start and took the lead in the fifth minute when Reece gathered a crossfield kick from Havili before crossing for the opening try. The Chiefs replied with a penalty from Cruden but the Crusaders struck back in the 14th minute when Havili found Reece with a long pass out wide and the All Black did well to step past Alaimalo on his way over the try-line.

The Chiefs were under the cosh but they soaked up the early pressure and were soon camped inside the Crusaders’ half. And in the 25th minute, they reaped reward when Alaimalo ran onto a well-timed pass from Damian McKenzie before scoring in the left-hand corner.

Cruden failed with the conversion attempt although the Chiefs were back in the match with the Crusaders holding a narrow 12-8 lead. The Crusaders continued to hold an edge, however, and spent long periods inside Chiefs territory but the home side did well to keep them at bay with a solid defensive effort.

The Chiefs were fastest out of the blocks in the second half and three minutes after the restart Tahuriorangi spotted a gap at a ruck close to the Crusaders’ try-line before barging over for his side’s second try.

Shortly afterward, Havili slotted a penalty which meant the sides were level at 15-15 by the 47th minute.

The Chiefs continued to attack and were rewarded in the 58th minute when Brad Weber found Wainui with a brilliant offload inside Crusaders’ 22 and the wing had an easy run-in for his side’s third try.

The rest of the match was an arm wrestle as the Crusaders tried to fight back but they committed too many errors and just before full-time Cruden slotted his second penalty to seal his team’s win. 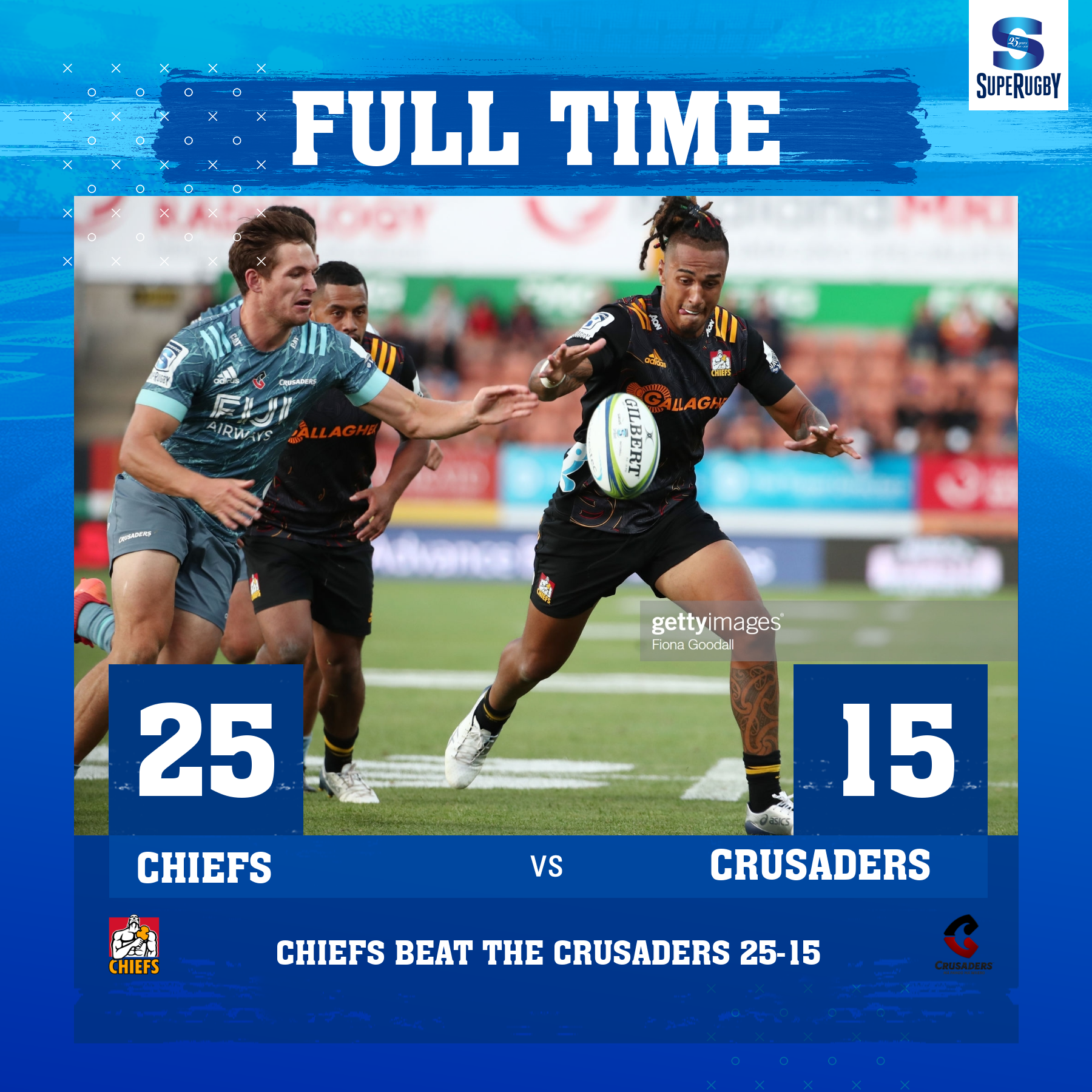