The Brumbies got their Super Rugby campaign back on track with a shock 26-14 victory over the Chiefs in Hamilton on Saturday.

The men from Canberra, who suffered an agonising last-minute defeat against the Highlanders last week, were full value for their win, controlling proceedings for most of the match.

The result is a momentous one as it ends 13-match losing streak for the Brumbies on New Zealand soil dating back to when they beat the Hurricanes in March 2014.

Tries from Tom Banks, Solomone Kata and Pete Samu (2) helped the Brumbies to victory while their other points came courtesy of three conversions from Noah Lolesio, who also caught the eye with his general play.

For the Chiefs, Aaron Cruden and Anton Lienert-Brown scored tries which were both converted by Damian McKenzie.

The Brumbies made an excellent start and raced into a 19-0 lead at half-time courtesy of three well-taken tries from Banks, Kata and Samu.

They opened the scoring in the ninth minute when Banks crashed over after slipping through a tackle from McKenzie deep inside the Chiefs’ 22.

That early five-pointer boosted the Canberra-based side’s confidence as they opted to run the ball from all areas of the field. That tactic gave the Brumbies the upper-hand - and most of the possession - and in the 15th minute their inside backs created space for Kata out wide, allowing him to round off in the right-hand corner.

Just before the interval, the Brumbies capitalised on a huge scrum on the Chiefs’ five-metre line when Samu broke from the back of the set-piece before dotting down under the posts.

The home side seemed shell-shocked but that did not deter the Brumbies who continued to attack after the half-time break. Shortly after the restart, they increased their lead when Samu crossed for his second converted try after a superb run that saw him beat three defenders on his way over the try-line.

With score 26-0 to the visitors, the Chiefs needed to respond and though they did up the ante on attack, it wasn’t enough to haul in their opponents.

In the 48th minute, Alex Nankivell put his team on the front foot with a powerful surge deep inside Brumbies territory before Cruden went over for their first try after running onto a pass from Te Toiroa Tahuriorangi.

That score was a shot in the arm for the Chiefs and they ran the ball from all areas of the field during the rest of the half. In the 53rd minute, the Brumbies were dealt a blow when James Slipper was yellow-carded for tackling Tahuriorangi inside the 10-metre radius after the scrum-half took a tap penalty.

The Chiefs soon benefited from their numerical advantage when Lienert-Brown gathered a pass from Tahuriorangi and crossed for his side’s second try.

The Brumbies still led 26-14, however, and though the final quarter was a frantic affair as the home side launched several attacks, the visitors did well to keep them out with a resilient defensive effort to secure the win. 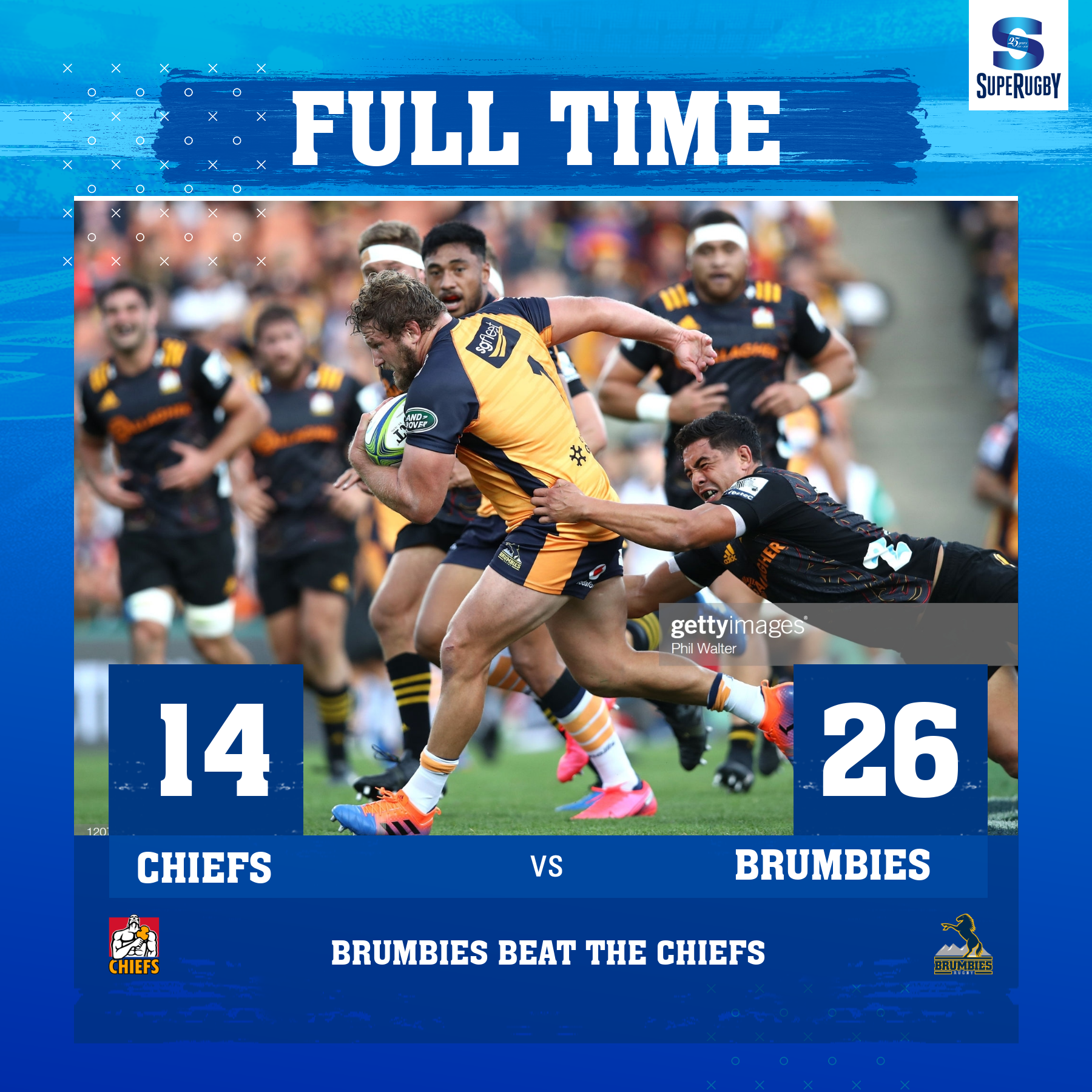