The Stormers came off second best for the first time this season as the Blues beat them 33-14 in their own backyard.

The visitors were clearly the better team on the day, and after scoring three impressive tries in the first half, they effectively shut out any chances of a Stormers fightback in the second.

The Blues opened up their account in only the second minute with a shot at goal after the hosts were penalised for being offside.

Five minutes later, Leon MacDonald's side had more to celebrate after some quick hands and smart passing in the opposition 22 allowed Joe Marchant to canter over for the easiest of tries. Otere Black added the extras as the Blues jumped to an early 10-0 lead.

The Stormers found themselves penalised again less than five minutes later for illegal binding in the scrum, and Otere Black was only too happy to oblige and put his side further in front.

The momentum stayed with the Blues, who were continuing to find plenty of holes in a Stormers defence that had not leaked a single try all season.

With 20 minutes gone, Dalton Papali'i dove over in the left corner after collecting a skip pass on the outside to score his side's second try. Black made no mistake with the conversion as the Blues opened up a whopping 20-point lead.

The home side needed to respond and they did so in the 26th minute when Steven Kitsoff powered through the Blues defence and Juarno Augustus finished it off with a pick and drive to put the Stormers on the board.

The Blues then found themselves reduced to 14 men after Mark Telea was yellow-carded for taking out Sergeal Petersen in the air.

Shortly before the half-time break and moments before Telea's return, the Stormers gave their fans more to cheer about when Petersen ran in their second try after the Blues defence was successfully flummoxed by a couple of dummy runners. Damian Willemse nailed his second conversion to cut the Blues' lead down to six points.

But the Blues responded in injury time to undo all the Stormers' good work, Marchant crossing for his second try of the afternoon to hand his side a 27-14 lead at half-time.

The Stormers needed to find a way back into the match after the break but found themselves mostly stuck in their own territory as the Blues continued to dominate.

Black nailed two penalty kicks in the 56th and 63rd minutes - the first for a high tackle and the second for a deliberate knockdown - to extend the visitors' lead even further.

Try as they might in the final 15 minutes, the Stormers could not find a way past the Blues defence, with moments of poor handling and execution doing little to help their cause as the Blues held on for the big victory on the road. 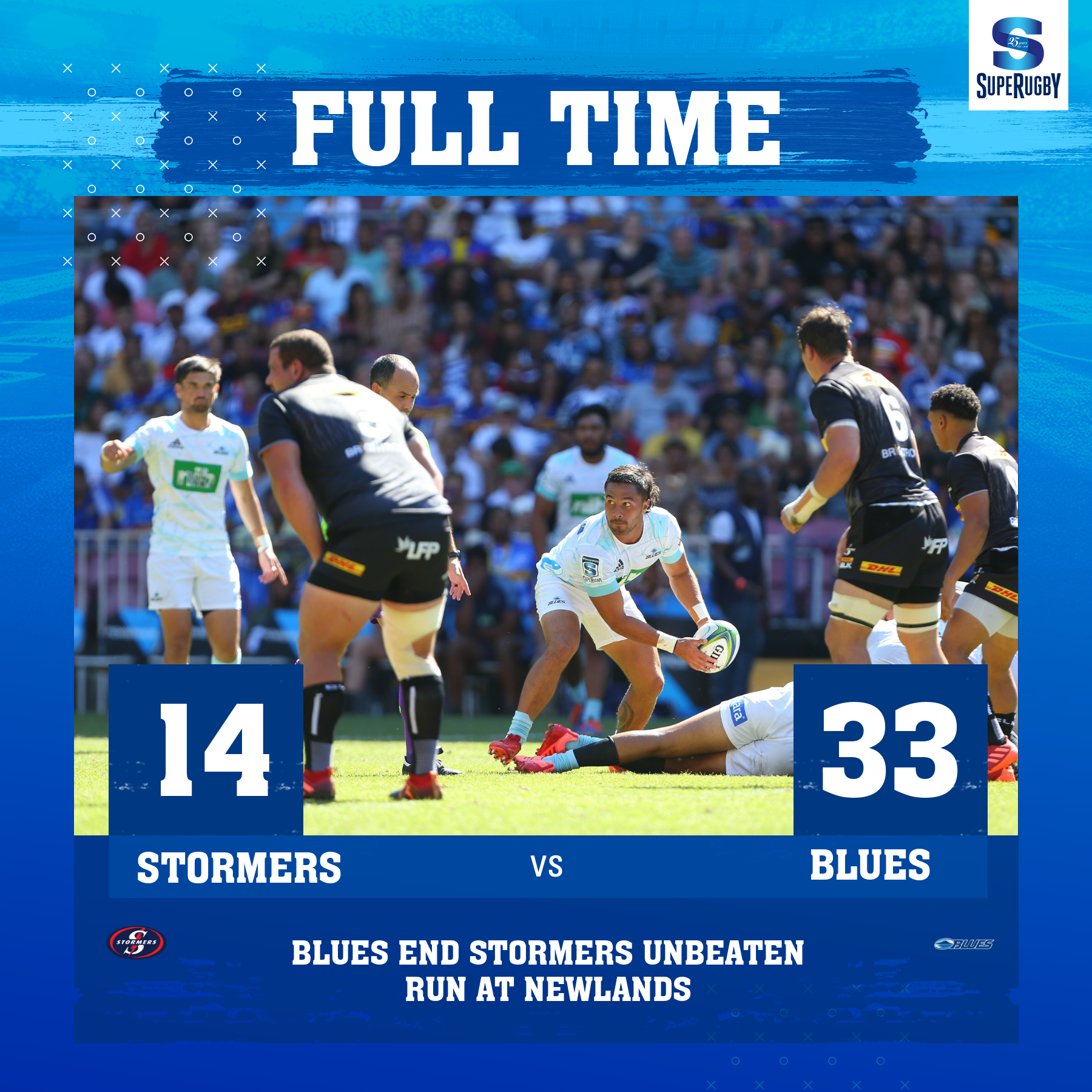