Blues down 14-man Hurricanes in Wellington

The Hurricanes produced a gutsy effort but ultimately came up short as the Blues secured a 24-15 win in their Super Rugby derby in Wellington on Saturday.

The home side played most of the second half with 14 men after Tyler Lomax was red-carded for a shoulder charge to the head of Stephen Perofeta, and they suffered further setbacks when Vaea Fifita and Jordie Barrett were yellow-carded in the game’s closing stages.

The result is a momentous one for the Blues as it ends a nine-match losing streak against the Hurricanes which started in March 2015. Akira Ioane and Mark Telea crossed the whitewash for the Blues and they were also awarded a penalty try while Otere Black succeeded with two conversions and a penalty.

For the Hurricanes, Ben Lam and Kobus van Wyk scored tries and Jordie Barrett added a conversion and a penalty.

The match started brightly for the Hurricanes, who opened the scoring after just two minutes courtesy of Lam’s try after Ngani Laumape and Vaea Fifita laid the groundwork with strong carries in the build-up.

The next 35 minutes was a messy affair with little interesting to report and this period was characterised by several unforced errors from both sides.

In the 37th minute, a rare foray from the Blues into the home side’s 22 resulted in a converted try from close quarters from Akira Ioane which meant the visitors were leading 7-5.

From the restart, Du’Plessis Kirifi did well to win a breakdown penalty and Jordie Barrett was successful off the kicking tee which gave his side a slender lead at the interval.

The scrappy nature to this game continued during the early stages of the second half but the Hurricanes were dealt a big blow in the 46th minute when Lomax received his marching orders for his illegal hit on Perofeta.

The tighthead prop’s exit changed the complexion of the match and the Blues soon took control of proceedings while the Hurricanes conceded a plethora of penalties. And in the 56th minute, the visitors regained the lead when Telea gathered a well-timed pass from Rieko Ioane, before crossing for his side’s second try.

Despite their numerical advantage, the Blues still committed several mistakes which kept the Hurricanes in the match and in the 63rd minute Van Wyk dotted down out wide.

Barrett’s successful conversion meant the hosts were now leading 15-14 but they soon surrendered that lead when Black slotted a penalty after Fifita was yellow-carded for a no-arms hit on James Parsons.

Just before full-time, the Blues secured victory when referee Mike Fraser awarded them a penalty try after a deliberate knock-on from Barrett which also resulted in him spending time in the sin bin. 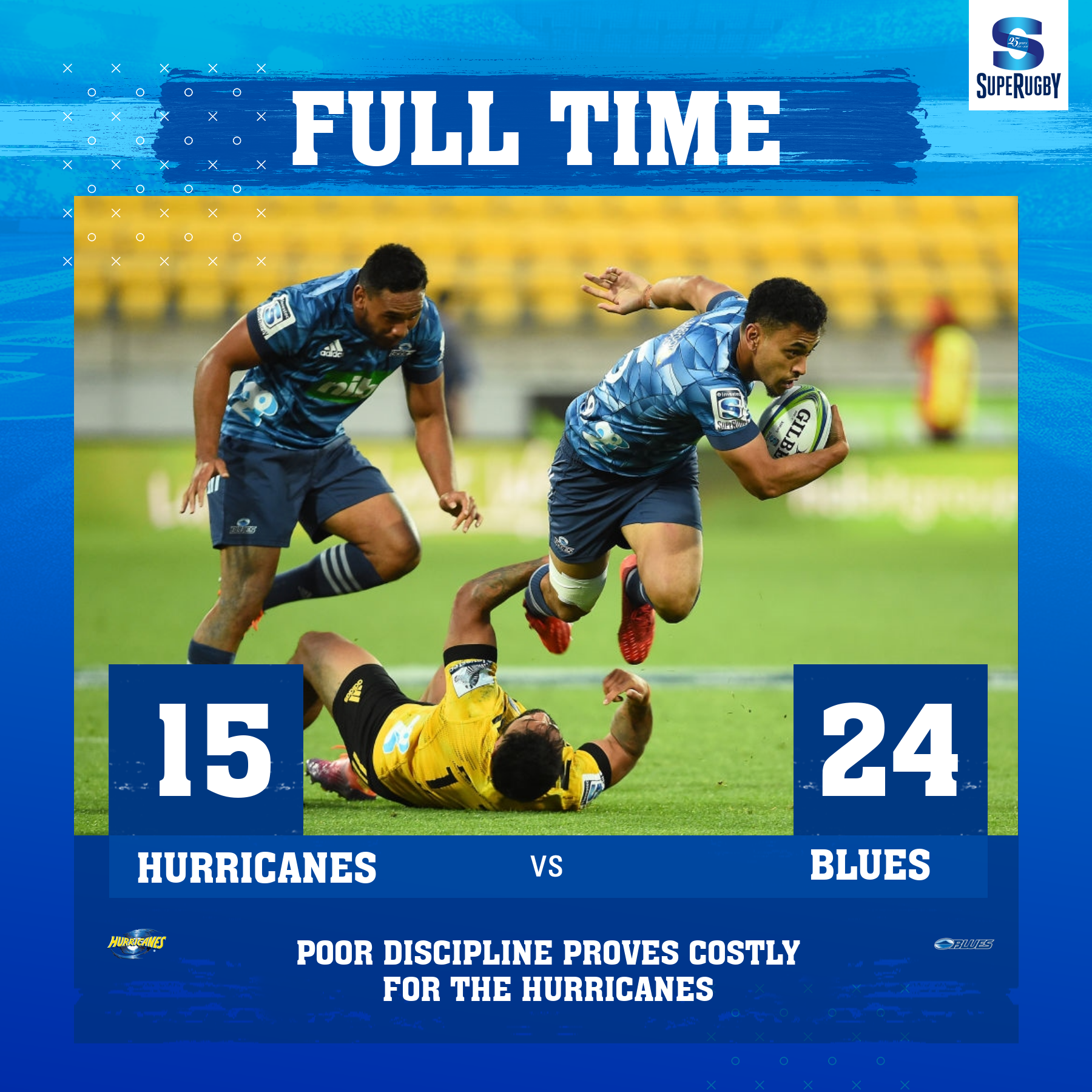