The Sharks claimed a well-deserved 24-14 win over coastal rivals the Stormers in a bruising Super Rugby encounter at Kings Park on Saturday afternoon.

Johan Du Toit has been sent to the sin bin for tackling Louis Schreuder in the air from the kick-off. He very lucky not to get a red card after it was recommended by the TMO Willie Vos and Schreuder was stretchered off the field.

It was a very physical opening 10 minutes with players flying in to challenge every breakdown. Neither side wanted to give the other any time or space on the ball.

The Stormers managed to hold the Sharks for the duration of Du Toit's sin bin and the tight start to the match continued in the 16th minute when Curwin Bosch missed a penalty shot.

Despite the lack of scoring opportunities, Lukhanyo Am showed tremendous faith in his charges around the 20-minute mark when he decided to go for a scrum when they were awarded a very kickable penalty straight in front of the poles about 35 metres out.

While it didn't result in points directly, it allowed the home side to maintain a significant period of territorial pressure that eventually saw Aphelele Fassi burst through the line and score the first try of the game in the 27th minute. It was successfully converted by Bosch.

Incredibly, after such a tight start, the Stormers answered with a try of their own almost instantly. A bad clearance kick was gathered by Juarno Augustus, who did fantastically to dodge a couple of tackles before a perfectly timed offload to Herschel Jantjies to run through space and over the line. Damian Willemse converted to level the scores at 7-all.

The Sharks would take a slender three-point lead into half time as Bosch knocked over a drop goal with literally the last kick of the opening 40 minutes.

The visitor's discipline let them down again at the start of the second period as a series of infringements allowed the Sharks to easily move downfield and set up a lineout five metres from the try line.

However, some equally poor handling from the home side let the Cape outfit off the hook and the Sharks were only able to come away with three additional points to extend their lead to 13-7.

Augustus was involved once again as the Stormers crossed the whitewash in the 61st minute to get themselves back in the game once again.

Willemse held on to the ball till just the last minute before offloading to put the eighth man through the smallest of gaps. He then burst through before popping an inside ball to put Paul De Wet over. Willemse knocked over the conversion to give the men from the Cape the lead for the first time in the game.

Despite a poor kicking performance from Bosch on the day, he still had the confidence to have a go from inside his own half and coolly slotted it to put his side ahead 16-14. The hosts won another penalty with a powerful scrum in the 75th minute and Bosch knocked it over to increase his side's advantage to five points.

Under the additional pressure of now needing a try to get back into the game, the Stormers wilted and the Sharks were able to comfortably wind the clock down inside the visitors half. They even managed to grab a late try to put a stamp on an impressive performance.

They won a tighthead scrum and quickly cycled the ball out to paceman Makazole Mapimpi out on the wing and no-one was able to catch him as he cantered over the line. Bosch missed the conversion but it didn't matter as the Sharks ran out 24-14 winners. 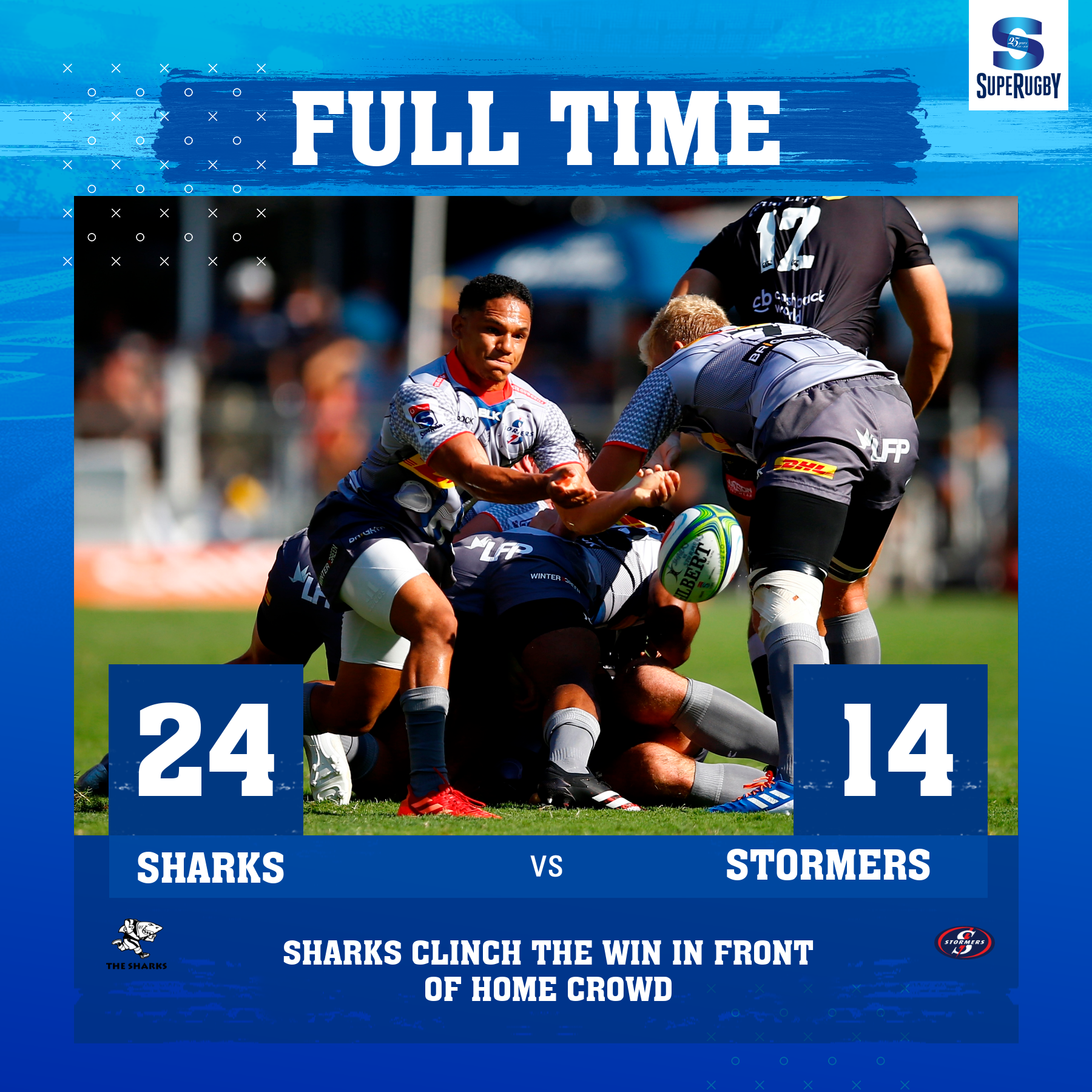