The Highlanders fought back from 20-6 down to beat the Chiefs 39-23 at the Waikato Stadium and secure their first Super Rugby Aotearoa victory of the season.

Following a disastrous opening half in which they were twice reduced to 14 men and at one stage trailed by as many as 14 points, Tony Brown's men totally turned things around in the second period, scoring four unanswered tries to turn the tables on their opponents and bounce back from their opening-week defeat to the Crusaders in style.

Chiefs coach Warren Gatland would have been hopeful of kicking off the season on a positive note following their strong start in the first half, but it wasn't to be. Instead, the men from Hamilton have now gone 10 matches without a victory.

The Chiefs took the lead with barely a minute gone when Sam Cane earned a penalty at the breakdown. Fullback Damian McKenzie lined up the straightforward kick to put his side three points up.

The Highlanders were soon given a couple of chances to hit back via a couple of penalties of their own. Josh Ioane missed his first shot at goal but made no mistake with the second to level the scores with 10 minutes gone.

The Highlanders were also struggling to keep the penalty count down as referee Paul Williams' whistle continued to blow with regularity. An advantage to the Chiefs for a high tackle soon turned into another advantage for offside even closer to the posts, allowing McKenzie to slot his second penalty.

Both teams were looking dangerous at times, with play regularly shifting from one side of the field to the other. Mitch Hunt made a great break from the Highlanders, followed by Etene Nanai-Seturo doing the same for the Chiefs.

From Nanai-Seturo's burst up the field, Patelesio Tomkinson gave away a cynical penalty at the breakdown from an offside position and got 10 minutes in the bin for his troubles. The Chiefs opted for the scrum rather than taking the points on offer, and it paid off in spades with a great try for No 8 Luke Jacobson right next to the posts after a simple pass from Brad Weber. McKenzie added the extras as the hosts opened up a 10-point advantage.

With Tomkinson still in the bin, the Highlanders earned a penalty in a kickable position and it was an easy decision for the visitors to take the kick and reduce the deficit to seven.

The Chiefs were starting to open up the Highlanders with regularity now and were nearly in again when Jacobson broke clean through the line after collecting a short pass in the midfield. Earning a penalty right in front, they opted for another scrum and ruthlessly exploited their one-man advantage to score another try via McKenzie, who promptly converted his own score.

Patelesio Tomkinson had barely gotten back on the field when the Highlanders lost a second man to the bin, Ash Dixon given his marching orders this time for yet another cynical foul.

Down a man and staring down the barrel of yet another five-pointer, the Highlanders found a bit of good fortune when a charged down kick inside their own 22 saw the ball fall right in the hands of Jona Nareki, who ran all the way the length of the field for the unlikeliest of tries. Ioane couldn't add the extras, but the Highlanders took the five points all the same.

Moments later, they earned a penalty for the Chiefs holding on in the tackle just inside the Highlanders' territory, but Ioane's penalty kick had the direction but not the distance as it finished 20-11 to the home side at half-time.

After such a strong first half from the Chiefs - and such an ill-disciplined one from the Highlanders - few would have predicted the direction the game took in the second half, as the resurgent visitors ran in three unanswered tries in the space of 10 minutes to totally change the complexion of the match.

The first try came after some steady and patient build-up for the Highlanders, although it needed some magic footwork from scrumhalf Folau Fakatava at the end to finally create the space they needed to score.

Play had barely gotten back underway when Nareki went on another marauding run down the field, breaking two tackles and getting the offload away to Shannon Frizell for the score. Ioane nailed a beautiful conversion from the touchline as the Highlanders suddenly found themselves with a five-point lead.

And the men from Dunedin weren't done yet as a knock-on from the Chiefs inside their own 22 handed them another attacking opportunity just minutes later. The unstoppable Nareki didn't need a second invitation as he crashed over for his second try of the evening after a step inside and then outside created the space. Ioane was on target again as the Highlanders opened up a 32-20 lead.

A rare foray into Highlanders territory resulted in a kick at goal for McKenzie as the Chiefs brought it back to within nine, but the visitors would put the final nail in the coffin 11 minutes from time when, from an attacking lineout, a ruthless Nareki received a wide pass from Hunt and slid over in the corner for his hat-trick try as the Highlanders cruised to what would turn out to be a surprisingly comfortable win. 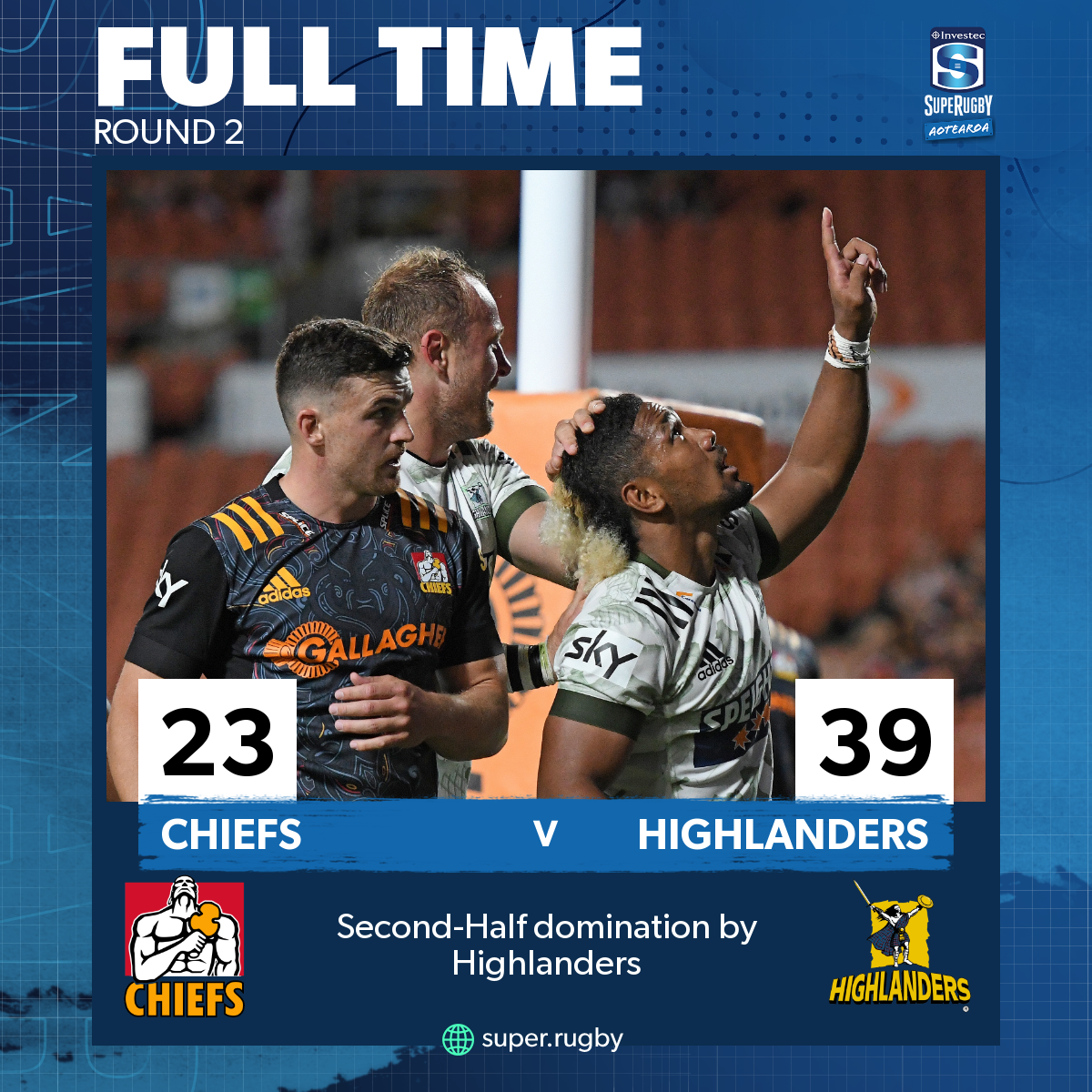