After two straight defeats, the Blues returned to winning ways in Super Rugby Aotearoa with a hard-fought 27-17 victory over the Hurricanes in Auckland.

It was a real tussle at Eden Park, with neither side at their clinical best, and it wasn't until midway through the second half that the Blues backline sparked to life and scored two great tries to take control of the contest.

The result sees the Blues solidify second spot on the Super Rugby Aotearoa table while the Canes remain rooted at the bottom with just one win from five.

The action started thick and fast with the Hurricanes piling on the pressure with 10 early phases before Dalton Papali'i managed to turn over possession, prompting an immediate Blues counter-attack.

Moments later, Papali'i pulled off another steal at the breakdown which nearly led to the opening try when the Blues flung it wide and surged up the field again.

The Canes were looking dangerous in spurts as well and looked set to take the lead after the Blues infringed right in front of the sticks, but the penalty was turned over when Du'Plessis Kirifi was given a yellow card for a high shot at an earlier ruck.

With a man down, the Canes were happy to take a long shot at goal when they earned a turnover penalty at the ruck, but Jordie Barrett didn't quite have the direction from range as it stayed scoreless after 20 minutes.

When Blues lock Gerard Cowley-Tuioti gave away another penalty at the breakdown a few minutes later, Barrett was happy to take another shot at goal, and this time the kick was good.

The opening try finally arrived after half an hour when the Blues were awarded a lucky penalty for what looked like a legal Canes steal at the ruck. Otere Black set up the attacking lineout, leading to another controversial decision when referee Brendon Pickerill awarded the Blues a penalty try and sent Ardie Savea to the bin for collapsing the Blues' rolling maul on the line - despite the Canes captain having seemingly come through the middle.

A few minutes later, the Canes slotted a penalty from right in front when the Blues strayed offside, but the hosts returned the favour shortly after to restore their four-point lead.

The Blues couldn't stop infringing, however, and when they handed Barrett another shot in the middle of the park, the fullback didn't need a second invitation to take the points on offer heading into half-time.

Barrett's boot continued to keep his side in the game and he handed the Canes the lead five minutes into the second half after nailing a monster 55-metre kick.

It took 50 minutes for the first real try of the match to arrive and it came via a great inside step from Stephen Perofeta to create the line break in Canes territory before he drew in a couple of defenders and offloaded to TJ Faiane for the score.

The Canes came close to hitting back after a great break from Julian Savea, but his namesake Ardie Savea couldn't hang on to the ball when he tried to play scrumhalf at the ruck and secure quick ball and the chance went begging.

The visitors were made to pay not long after when Rieko Ioane sliced the Canes open in the midfield and sent a long, floating pass out wide to Mark Telea who went over in the corner. Black nailed the conversion as the Blues opened up a 24-12 lead.

With five minutes to go, the Canes handed themselves a lifeline when they set up an attacking lineout up close and bashed their way over the line via Reed Prinsep, but Barrett couldn't nail the conversion and it was the Blues who had the last word when Black converted a penalty with the final kick of the match to rob the Canes of a losing bonus point. 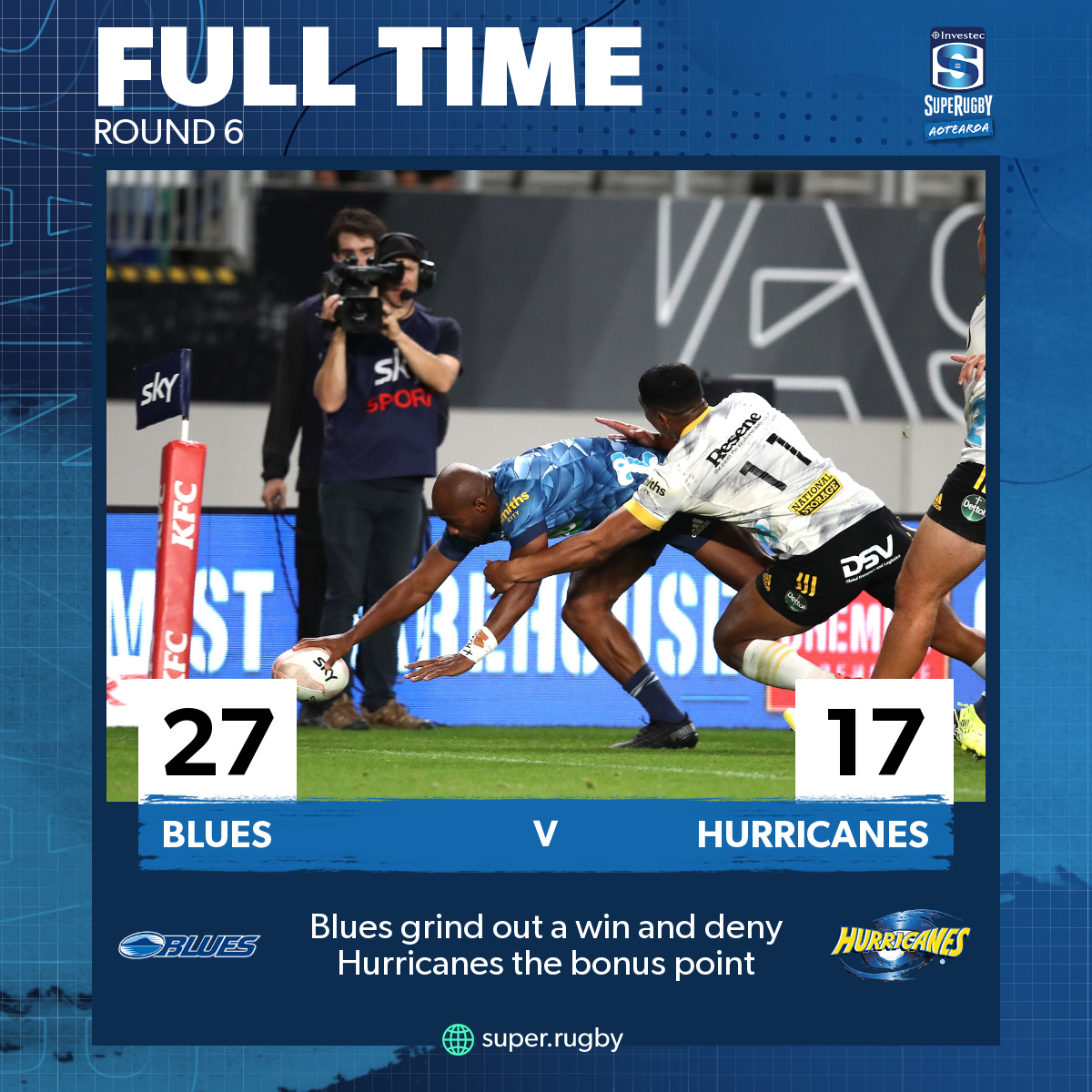