Damian McKenzie kicked the Chiefs into the Super Rugby Aotearoa final with a thrilling victory over the Hurricanes on Friday.

After a chilling and moving ceremony to honour the fallen and celebrate ANZAC Day, the Hurricanes' Jordie Barrett got things underway in Hamilton. It was a stunning start for the visitors, as Tyrell Lomas slipped a perfect short pass to lock James Blackwell who broke the defence and charged over the line from 25m out in the opening minute.

The Chiefs continued to weather the storm, with Dane Coles opting for a quick tap penalty just 5m from the try line. It didn't come off and the hosts absorbed the pressure. They would get on the board in the 15th minute thanks to the boot of Damian McKenzie and his superb mullet.

Midway through the half, an immense scrum from the Chiefs gave them good front-foot ball with McKenzie showing a couple of good touches. The Hurricanes then conceded a lineout under pressure. The lineout drive failed and they stoically defended ten phases on their line under a penalty advantage. The Chiefs opted for a scrum and powered their way over the line, with Pita Gus Sowakula being awarded the try, cueing cowbells aplenty from the home crowd as they went up 10-7.

On the stroke of halftime, a Barrett bomb from 55m out would tie things up at 10-10.

The Cheifs regained the lead four minutes into the second stanza after the Hurricanes gave away a penalty at rucktime in the middle of the park. McKenzie obliged, extending his lead at the top of the Super Rugby Aotearoa points standings.

The Chiefs then earned another penalty deep in the Hurricanes half after a bizarre sequence of play. A Chiefs lineout was thrown too deep and Bryn Gatland came through with the fly-hack on the bounce, collected the ball and chipped forward again. Barrett couldn't collect cleanly on cover defence, resulting in an offside penalty. The Chiefs opted for the scrum again but this time an opportunistic break from Gatland saw him go over next to the poles.

But the Hurricanes responded almost immediately, sparked by a Devan Flanders break in mid-field. About ten phases later, Billy Proctor darted over the line untouched. Barrett added the extras to take the scoreline to 20-17.

A dubious offside penalty from Preferee Paul Williams - who was otherwise excellent all night - left McKenzie a 40m shot at goal, which he slotted, to extend the lead to six points with 19 minutes to play.

There was then an extended period of play on the Chiefs line with the Hurricanes setting up thee consecutive lineout drives. Eventually it would pay off, with replacement hooker Asafo Aumua barrelling over the line from five metres out. Barrett would then squeak over the conversion and the visitors had the lead 23-24.

A key moment in the match came from Chiefs lock Tupou Vaa'i, who earned a penalty by competing at ruck time with just two minutes left to play. The ensuing lineout was messy but the Chiefs regained the ball then got a scum after a failed steal from Du'Plessis Kirifi. Their superior scrum earned them a penalty in the 82nd minute and McKenzie stepped up for duty. From 45m out, McKenzie split the uprights to steal victory from the jaws of defeat.' 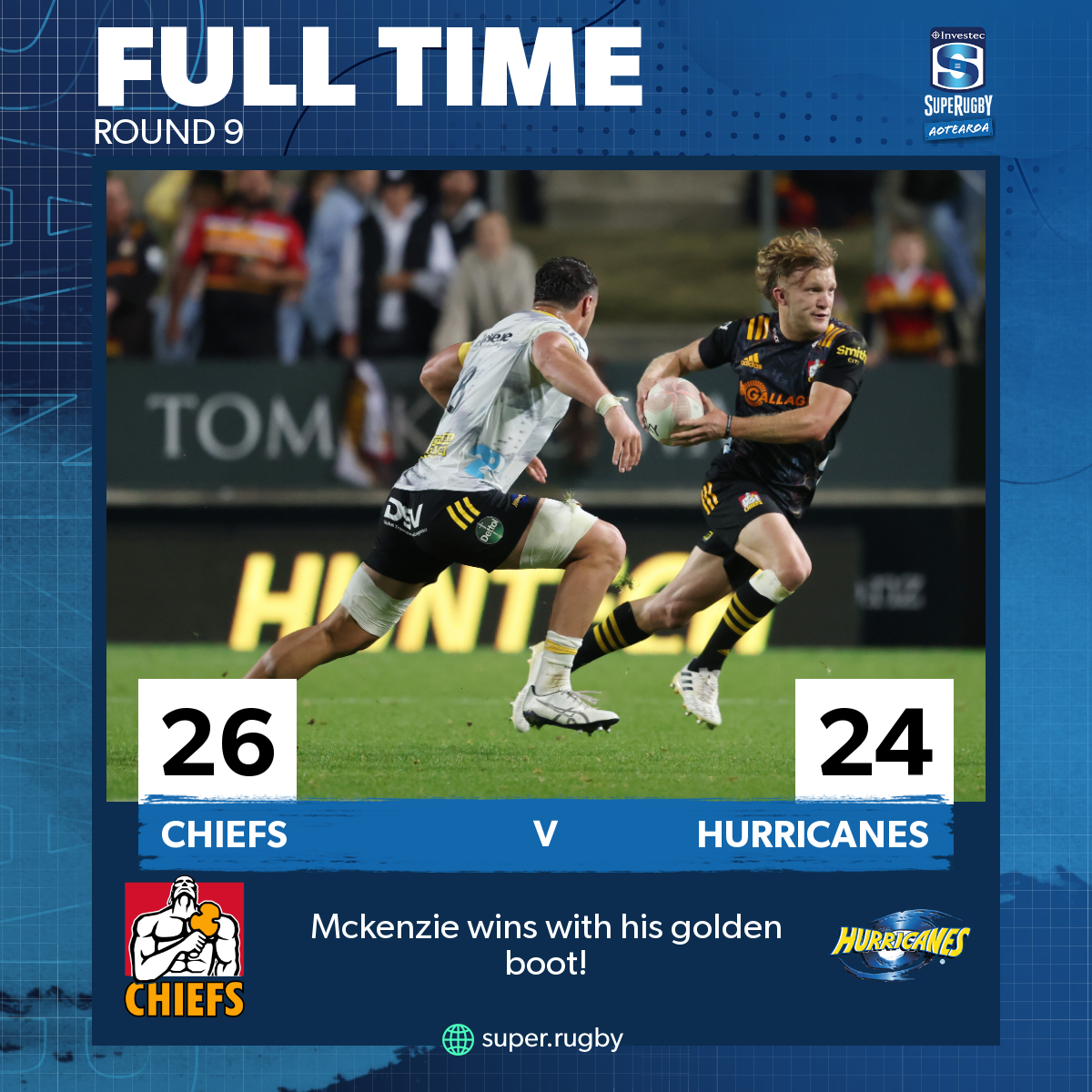