The Crusaders added another title to their burgeoning collection of silverware when they defeated the Chiefs 24-13 in Christchurch on Saturday.

A tight opening half was followed by a brilliant performance from the mercurial Richie Mo'unga in the second stanza, securing another title for the dominant Canterbury club.

On a still night with the threat of rain, the early exchanges were full of running rugby, with both teams enjoying several phases on attack.

The Crusaders would strike first after an offside penalty. They adopted to kick for the corner and after several phases in the Chiefs 22m, they shifted the ball wide to winger Sevu Reece who was one-on-one with Damian McKenzie. Reece gave him the stutter-step then put his head down and managed to reach forward and dot the ball on the line for the opening try in the ninth minute.

With visits to the Crusaders 22m rare, Chiefs captain Brad Weber opted for a shot at goal after an offside penalty. McKenzie obliged to take the score to 7-3.

Hot on attack, the hosts spread the ball wide and centre David Haivili turned the defence with a perfectly weighted grubber. The ball bounced fortunately for the in-form Will Jordan, who tumbled over the whitewash for his fifth try of the season.

The scoring continued after a muted lineout drive from the Chiefs at the other end of the park. Replacement scrumhalf Te Toiroa Tahuriorangi summed up the situation perfectly and threw the ball out to his centre Alex Nankivell, who drew two defenders and produced a miracle one-handed offload to a flying McKenzie, who slid over in the corner. He converted his own try and made the score 12-10 midway through the opening half.

The Chiefs had a half-chance in the far corner after a scintillating attack, but a great tackle from Jordan saw Jonah Lowe ground the ball short.

Late in the half, a series of penalties saw Crusaders captain Scott Barrett opt for poles and Mo'unga split the uprights to take the hosts' lead up to five.

McKenzie would have two chances either side of halftime to narrow the deficit, but missed both penalty chances.

Crusaders hooker Codie Taylor then earned himself a yellow card after taking McKenzie out in the air. The fullback lined up the penalty from 42m out but again he pushed his attempt wide.

After a Captain's Referral from Weber, TMO Brendon Pickerill ruled that Reece's tackle on replacement Chase Titatia was high and dangerous, resulting in the Crusaders being reduced to 13 men for five minutes. McKenzie finally got the monkey off his back to make it a two-point ballgame with 20 minutes to play.

With the rain now finally falling, Mo'unga then sparked a superb counter from deep in his own half. He fielded McKenzie's bomb and stepped one defender and out-paced another, making 30m before offloading. Several phases later and playing under advantage, Mo'unga then dropped into the pocket and chipped over his first-ever Super Rugby drop goal.

Now controlling proceedings, the Crusaders opted for a lineout drive and milked a penalty 30m out, which Mo'unga popped over to take the hosts lead to eight points with 12 minutes on the clock.

With their tails up, the Crusaders earned a penalty at scrum time. The ensuing kick for touch was not out and the Chiefs, needing to chase the game, opted to attack from deep. Mo'unga chased down Tiatia and made an excellent cover tackle and his forwards earned a kickable penalty as a result. The All Black fly-half kicked the points, effectively ending the Chiefs' challenge. 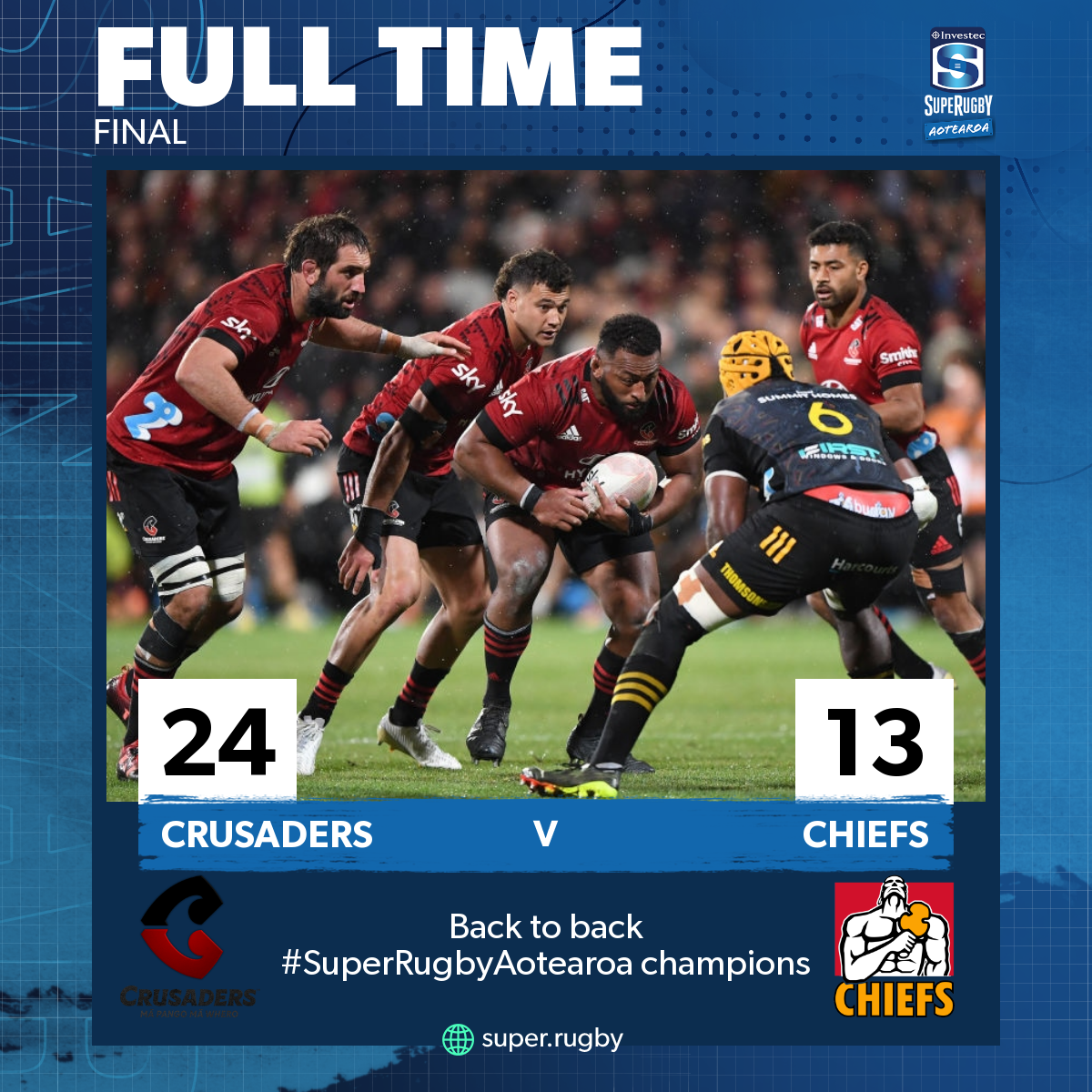