The Brumbies claimed their biggest ever win over the Waratahs with a 61-10 thrashing at GIO Stadium in Canberra on Saturday.

The Super Rugby AU favourites have now won 17 out of their last 18 fixtures at home as they ran in nine tries through Rob Valetini, Mack Hansen (3), Noah Lolesio, Connal McInerney, Nic White, Lachlan Lonergan and Tom Banks while the Waratahs scored their solitary try via Harry Johnson-Holmes.

The hosts were caught offside in the third minute and Will Harrison slotted the penalty between the poles to hand the visitors a 3-0 lead.

The men from the capital responded three minutes later when they got the ascendancy at scrum-time and kicked for the corner. From there, the lineout was set and after a series of powerful carries from the forwards, flanker Valetini muscled his way over the tryline. Lolesio added the extras for a 7-3 lead.

The Brumbies were looking sharp on attack, playing with plenty of width and extended their lead with a superb team try that resulted in Hansen dotting down in the left-hand corner with a lot of space on the overlap after the 'Tahs defence had been severely stretched. This time Lolesio could not convert as the score remained 12-3.

The Brumbies were rewarded for kicking for the corner once again in the 26th minute. They used their primary weapon - the driving maul - to power forward as an unlikely Lolesio dotted down at the back after joining the maul in its final stages.

The Waratahs responded. Brumbies hooker Connal McInerney was caught offside and the away side kicked for the corner. Thereafter, the forwards took the ball through a couple of phases as they inched closer to the line with prop Johnson-Holmes the one to eventually power over in the end. Harrison made no mistake with the penalty to make it 19-10.

The hosts grabbed their third try on the stroke of half-time when Connal McInerney flopped over after another bulldozing driving maul from Dan McKellar's side.

Straight from the restart, Jack Maddocks thought the ball was going out but it unexpectedly bounced back into play and he managed to scoop the ball backwards but the Brumbies got to the breakdown quickly and forced the turnover. The hosts opted for the scrum and White broke off the back of the scrum and spun his way out of the first tackle and weaved his way over the tryline. Lolesio added the two for a 33-10 lead.

The Brumbies camped themselves in the 'Tahs 22 for the first 15 minutes of the second half before finally beeaking through in the 56th minute. From the scrum, the Canberra-based side stacked the left with some quick hands resulting in centre Irae Simone playing the final, long pass to Hansen, who dotted down expertly in the corner despite the attentions of the 'Tahs defenders.

The Brumbies were running riot and it was beginning to look like a slaughterhouse in Canberra as they pushed the advantage out to 47-10 when Lonergan was the latest to go over at the back of a well-worked rolling maul.

It was an impeccable performance from the Brumbies. In the 71st minute, Len Ikitau with not much space out on the left-hand touchline played the perfect grubber which bounced up for Hansen to pluck it out of the air and dive over the line for a scintillating hat-trick.

Even more gloss was put on the result with four minutes to go when Alex Newsome's looping pass was intercepted by Banks, who made good metres before being brought down. The ball was recycled and the man who started the move finished it in the corner for the final nail in the coffin. 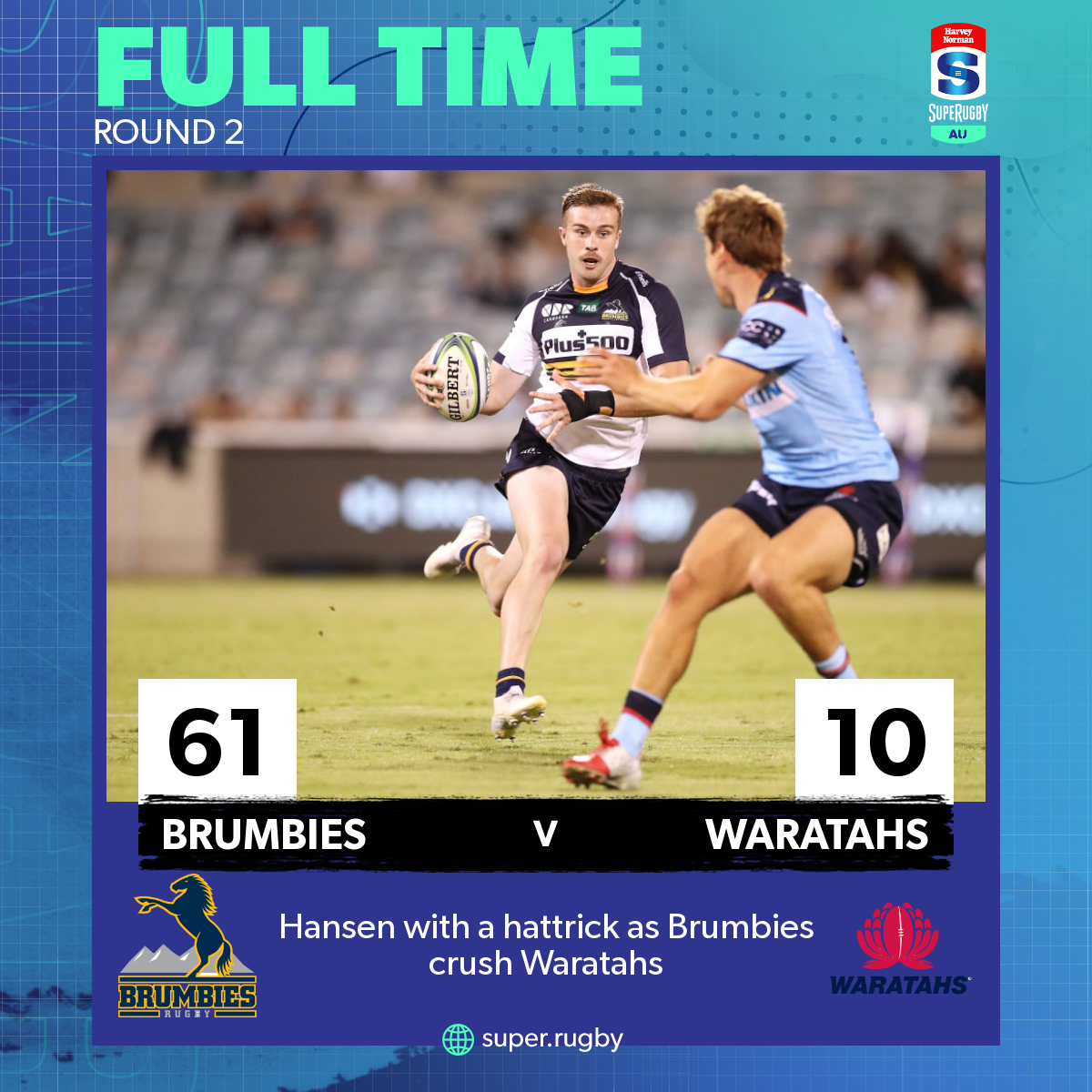