There was no let-up for the struggling Waratahs against the Reds in Sydney on Saturday, as the Queenslanders went top of the table with a thumping 46-14 win.

The Reds outscored the 'Tahs seven tries to one in a one-sided contest, with substitute Alex Mafi finding enough time to score a hat-trick despite only playing the second half. The Waratahs showed some signs of life but had no real answer for a rampaging Reds outfit on the night.

The win sends the Reds back to the top of the Super Rugby AU table while the 'Tahs remain rooted at the bottom, still searching for their first win of what is turning out to be a very tough season.

The hosts came out showing plenty of intent and earned a penalty when the Reds defensive line strayed offside, allowing Will Harrison to settle his nerves with an early kick at goal. Moments later, the Reds infringed again and Harrison obliged to double the 'Tahs lead.

After looking a little bit shaky in the opening exchanges, the Reds were sparked to life in the 12th minute with a fantastic solo try from Tate McDermott, who picked the ball up from behind the scrum just inside the 'Tahs 22 and scythed straight through the defence before carrying a few men with him over the line.

Now looking increasingly dangerous, the Reds were nearly in for their second try on 20 minutes as they worked their way all the way to the 'Tahs tryline, but a spectacular steal from Carlo Tizzano saw the home side escape.

Back came the Reds into the 'Tahs 22 a few minutes later, but the dangerous Jordan Petaia couldn't get his offload away following an impressive straightening run.

The Waratahs' defence was keeping them in the match, but no team can keep defending forever, and when the Reds got it up close again, a quick pop pass from McDermott to Lukhan Salakaia-Loto saw the big man shrug off a couple of tackles and go over in the corner. James O'Connor nailed his second conversion to hand the Reds a 14-6 lead.

When the Reds were given a kickable penalty right in front five minutes before the break, captain O'Connor decided to take the points on offer and extend his side's advantage from the kicking tee.

Harrison was given a chance to return the favour just before the whistle and made no mistake to reduce the deficit to eight once again but unfortunately for the 'Tahs they couldn't control the ball from the ensuing kick-off, and the Reds didn't need a second invitation to go on the attack. 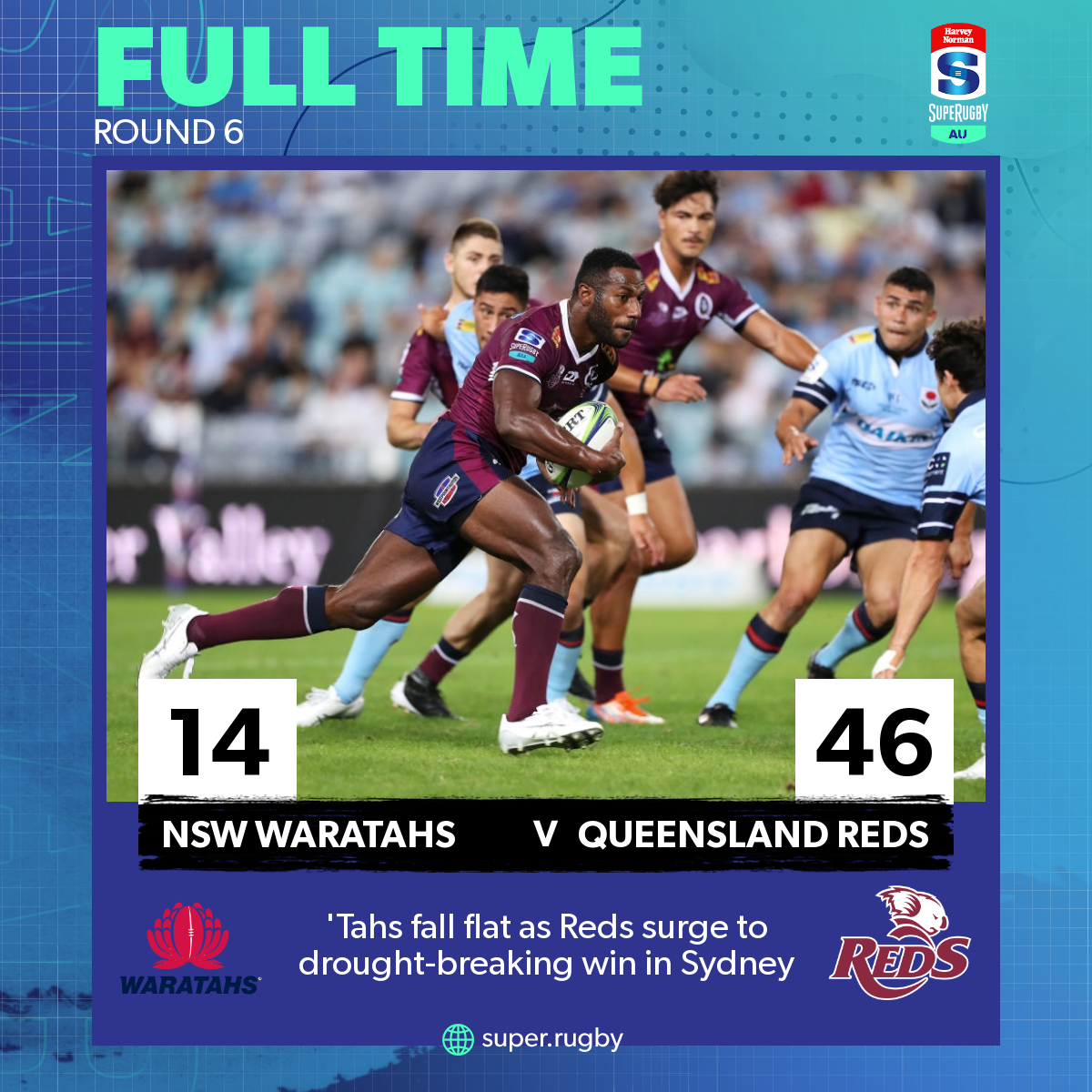 A long, looping pass found Suliasi Vunivalu out wide, who nearly made it all the way to the line before a quick recycle allowed O'Connor to pick out Filipo Daugunu with a crossfield kick for the easy run-in. The conversion was away but the try was a hammer blow for the home side on the stroke of half-time.

The Waratahs came close to hitting back early in the second half through Izaia Perese following a mistake by Jordan Petaia inside his own 22, but the try was ruled out by the faintest of knock-ons just before Perese dotted down.

Instead, it was the Reds who scored first when some great interplay between the backs and forwards took them all the way to the line where there was no stopping front-rower Taniela Tupou from a few metres out.

To the 'Tahs credit, they responded brilliantly to that try, putting together their best passage of play of the match to make their way up the field. A great run and step by Lalakai Foketi near the touchline nearly saw him go all the way before a little pass inside to Will Harris sent the No 8 in for the score.

But the Reds didn't panic and it didn't take them long to hit back with their fifth try of the evening, this time relying on their rolling maul to do the job, with substitute Alex Mafi coming up with the ball in hand.

Things went from bad to worse for the 'Tahs when Hugh Sinclair was sent to the bin for repeated infringements. The Reds set up the attacking line-out and Mafi picked up his second try after another powerful driving maul.

The 'Tahs should have scored when they spent a lengthy spell camped in the opposition 22 in the final 10 minutes and the Reds lost a man to the bin, but they couldn't find a way over the line and instead it was Mafi - only on the park since the start of the second half - who grabbed his hat-trick at the other end of the field by bashing his way in under the posts.