The Reds did just enough to defeat the Brumbies in a nail-biter in their Super Rugby AU clash at Suncorp Stadium on Saturday.

The Brumbies were tactically astute and excellent on defence in the opening half, but some James O'Connor magic helped the Reds mount a comeback to steal the game at the death.

The visitors enjoyed all the ball in the opening stages, keeping the Reds pinned back in their 22m. Opting to kick for touch after an early penalty, the Reds conceded another after an early counter-drive at the lineout. Again, the Brumbies attempted their trademark lineout drive and again the Reds were penalised.

But Folau Fainga'a wasn't to be denied a third time as the lineout drive proved too strong, with the burly hooker going over in the corner in the sixth minute.

The Reds would finally get some ball after 12 minutes of drought and were looking decent on attack until Tom Banks intercepted a speculative pass from O’Connor and ran 75m in splendid isolation for the try. Noah Lolesio ignored the jeers from the sideline to add the extras, making it 0-12.

The Reds looked dangerous when they put pace on the ball and earned an offside penalty, which captain O'Connor opted to pop over the poles for their first points in the 22nd minute.

Good runs from Reds centre Hunter Paisami and tireless number 8 Harry Wilson gained valuable yards for the home side as they forced another penalty out in front. O'Connor obliged to reduce the gap to six points.

The Reds thought they scored a try after a great chase by Bryce Hegarty knocked the ball out of a retreating Andy Muirhead's hands on the line and then dotted down, but TMO Brett Cronan ruled that it was a knock-on in-goal, much to the disappointment of the 22 000-strong crowd.

The enormous Taniela Tupou gave away a soft penalty on the stroke of halftime, prompting Nic White to have a crack from 53m out. The penalty squeaked over the crossbar and the players ran down the tunnel with the Brumbies up 6-15.

The Reds started the second half with a bang, thanks to great vision by O'Connor. The Wallaby flyhalf executed a perfect cross-kick from in his own half that was gathered by an unmarked Jock Campbell 25m up the park. A couple phases later, centre Josh Flook slip Muirhead’s tackle and crash over in the nearside corner for a well-worked try. O’Connor was accurate from the touchline for the conversation.

But the Brumbies hit back almost immediately. A classic set-piece move saw plenty of deception in the backline with Muirhead delivering the killer pass to Tom Wright, who dotted down untouched. Lolesio added the extras to take the score to 13-22 in the 56th minute. 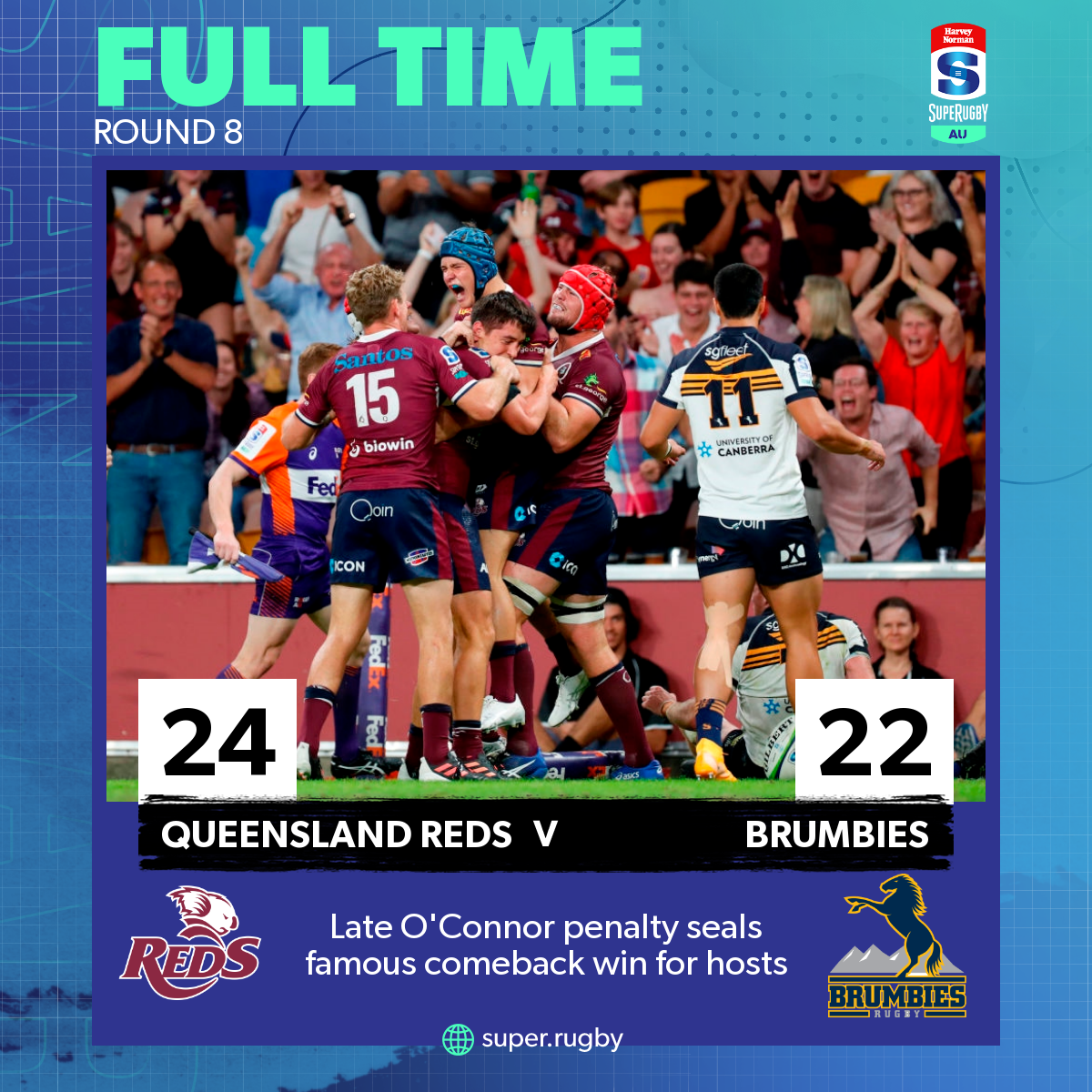 O'Connor's vision and accuracy with the boot resulted in another try for the Reds minutes later. 20m out from the try line, the flyhalf opted for a high ball despite winger Jordan Petaia being surrounded by defenders. However, the 21-year-old launched himself skyward and came down with the ball over the line for a spectacular solo effort to take the scores to 18-22 with 15 minutes to play.

A penalty from out in front by that man O'Connor made it a one-point game and with the tempo increasing, the Reds had their tails up.

Reds loose forwards Fraser McReight and Angus Scott-Young then combined to get a crucial turnover on their own try line, relieving the pressure. After winning the following lineout, another excellent tactical decision from O’Connor to kick would result in a Reds scrum. The forwards then turned on the heat to push over the Brumbies pack and win a scrum penalty.

With three minutes left on the clock, the mercurial O'Connor slotted the penalty to give his side the lead for the first time in the match.

The Reds defence held on desperately in the final minutes, resisting wave after wave of Brumbies attack to eventually force a knock-on, securing a home final for the competition.