The Reds had to withstand a late fightback but eventually clung on for a tense 40-34 victory over the Chiefs in their Super Rugby Trans-Tasman clash in Townsville.

It was the first win by an Australian team in the competition in three weeks with the Reds also snapping two-match losing streak.

The hosts got the scoreboard up and running in the 16th minute when they were awarded a penalty try after the officials deemed Chiefs wing Chase Tiatia to have committed a deliberate knock-down when the Reds were certain to score a try 5 meters out.

In addition to seven points on the scoreboard, Tiatia was also shown a yellow card and spent the next 10 minutes in the sin bin.

Chiefs flyhalf Damian McKenzie pulled three points back by slotting a penalty but that was to be the only points the Chiefs would get in the first half as the Reds started to dominate.

The home team, still a man to the good, scored their second try in the 22nd minute when centre Isaac Henry sliced through the defence after a flat pass from scrumhalf Tate McDermott.

It proved to be a double blow for the Kiwi team as in the build-up McKenzie was shown to have made a head-high tackle on McDermott and the All Black was shown a red card.

The Aussie side took full advantage and in the 24th minute wing Suliasi Vunivalu went in down the right-hand side for the third try of the game.

On the half-hour mark, hulking prop Feao Fotuaika bulldozed his way over the line with James O'Connor again converting.

The Reds looked to be out of sight three minutes before halftime as they went in for their fifth try of the contest as centre Henry crossed for his second.

O'Connor added the extra two points as the home team went into the break with a massive 33-3 lead.

The Chiefs struck first after the interval when flank Flank Pita-Gus Sowakula scored in the 52nd minute after long build-up play that involved both forwards and backs.

The Reds though added to their tally of tries just five minutes later as left-wing Filipo Daugunu crossed the line and O'Connor converted to make the score 40-8 at that stage.

The New Zealand outfit though launched a superb fightback with little more than 15 minutes remaining as they scored four unanswered tries.

Lock Tupou Vaa'i peeled away from a maul to dive over and not long after replacement prop Reuben O'Neill also crossed the line.

Fullback Kaleb Trask converted both tries to bring the score to 40-22 as the home team started to falter.

Following massive Chiefs pressure and good ball carrying skills, wing Bailyn Sullivan scored in the left-hand corner and Trask converted in the 74th minute to reduce the deficit to 11 points.

The Kiwi side then dramatically went in for another try with two minutes remaining as reserve halfback Xavier Roe ran from deep to score in the corner, and with the Chiefs failing to convert it left the score at 40-34 with one final kickoff to come.

The Chiefs took the deep kickoff and launched another attack but a knock-on put paid to their hopes of completing the dramatic comeback.

The Reds looked relieved to hear the full-time whistle as they hung on for their first win of the tournament. 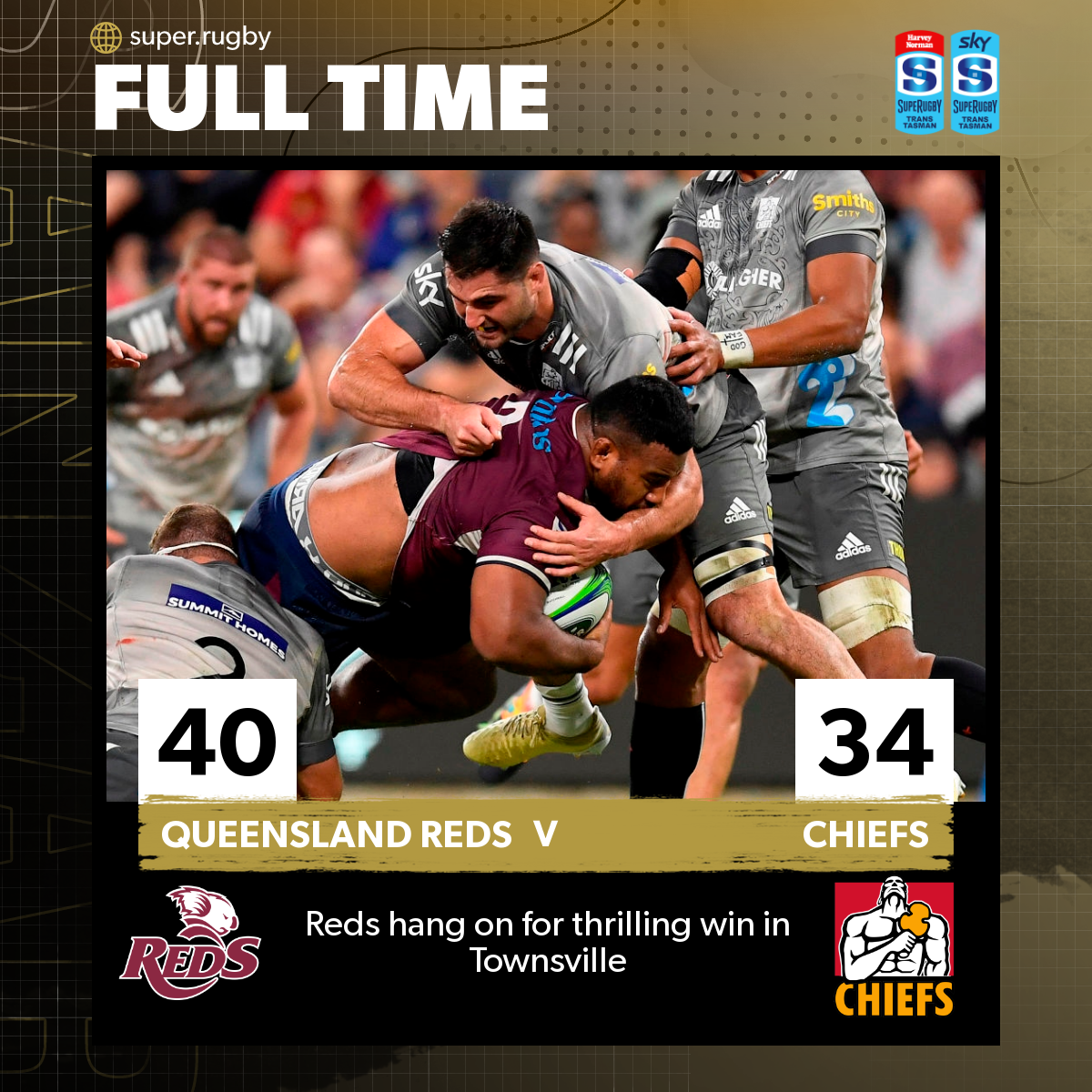