The Crusaders were denied a bonus-point win in their 29-21 Super Rugby Trans-Tasman victory over the Western Force in Christchurch on Friday.

Despite resting a number of their stars, the Crusaders held off a spirited effort from the Force, on a night where their defence outshone their attack.

The Force enjoyed a great start when they attacked from the set-piece on the halfway line. There was slick handling from fullback Jake Strachan and former All Black Richard Kahui that made space for a flying Toni Pulu, who stepped one defender and outpaced the rest. Flyhalf Domingo Miotti added the extras from near the touchline and the Force found themselves 7-0 up after four minutes.

The Crusaders struck back ten minutes later thanks to a turnover in the midfield by Whetukamokamo Douglas. The flanker ripped the ball in the tackle and shovelled it wide to centre Braydon Ennor, who slid through a pin-point grubber for his winger Manasa Mataele to chase, collect and celebrate.

The huge Crusaders pack began to gain some ascendency at scrumtime, where 140 kg behemoth Tamaiti Williams was packing down at prop. After setting up an attacking lineout, silky hands through the backline would see Will Jordan slide over in the corner. Flyhalf Fergus Burke - filling the large boots of a rested Richie Mo’unga - missed the conversion from the near touchline and the score remained 12-7.

A couple of penalties conceded by the Force resulted in an attacking lineout 7m out for the Crusaders. Almost inevitably, they mauled it over the line and Douglas was awarded his first Super Rugby try, extending their lead.

But the Force bounced back just two minutes later. The Perth-based franchise showed good patience and got just reward 11 phases later when eighthman Ollie Callan crashed over from close range.

But the visitors' hard toil was undone by poor discipline. Force captain Kyle Godwin was penalised for a neck-roll on his opposite number at the breakdown, which led to several minutes of defending on their own line. The Crusaders would eventually break through well after the halftime hooter via flanker Sione Havili Talitui. Burke added the extras to make it 24-14 at the half.

After a lapse in judgement from Jordan at fullback, the Force were hot on attack in the beginning of the second stanza. The Crusaders defended for 14 phases on their line under penalty advantage. The Force went to the lineout, which was overthrown by Feleti Kaitu'u, letting the Crusaders off the hook.

In true Crusaders style, they made them pay just seconds later. Setting up another attacking lineout, they mauled to the line once again where it collapsed. Scrumhalf Bryn Hall fired a flat ball out to Jordan who crashed over for his second of the night, taking the lead to 15 points.

A good sustained period of play from the Force saw them set up camp once again on the Crusaders line. The home side defended for no less than 17 phases before giving away a penalty. Given the centre-field position, the Force opted for a scrum. But the little things just continued to go against the Australians and the Crusaders managed to get out of trouble, but not out of their 22m.

As the Force entered the tenth minute deep inside the Crusaders half, replacement Oliver Jager would relieve the pressure with a fantastic steal at the breakdown and Burke would boot them upfield.

The Force would continue to enjoy most of the ball as the clock wound down but could just not find their way through the staunch defence.

In the dying embers of the game, the Force went coast-to-coast, managing to take away the bonus point from the Crusaders. Kahui made good meters down the far touchline, but it was the vision from Godwin that led to the try. Recognising there was no one at home at fullback, Godwin hoofed the ball downfield for Sevens star Jordan Olowofela to chase and he gathered to go over untouched. 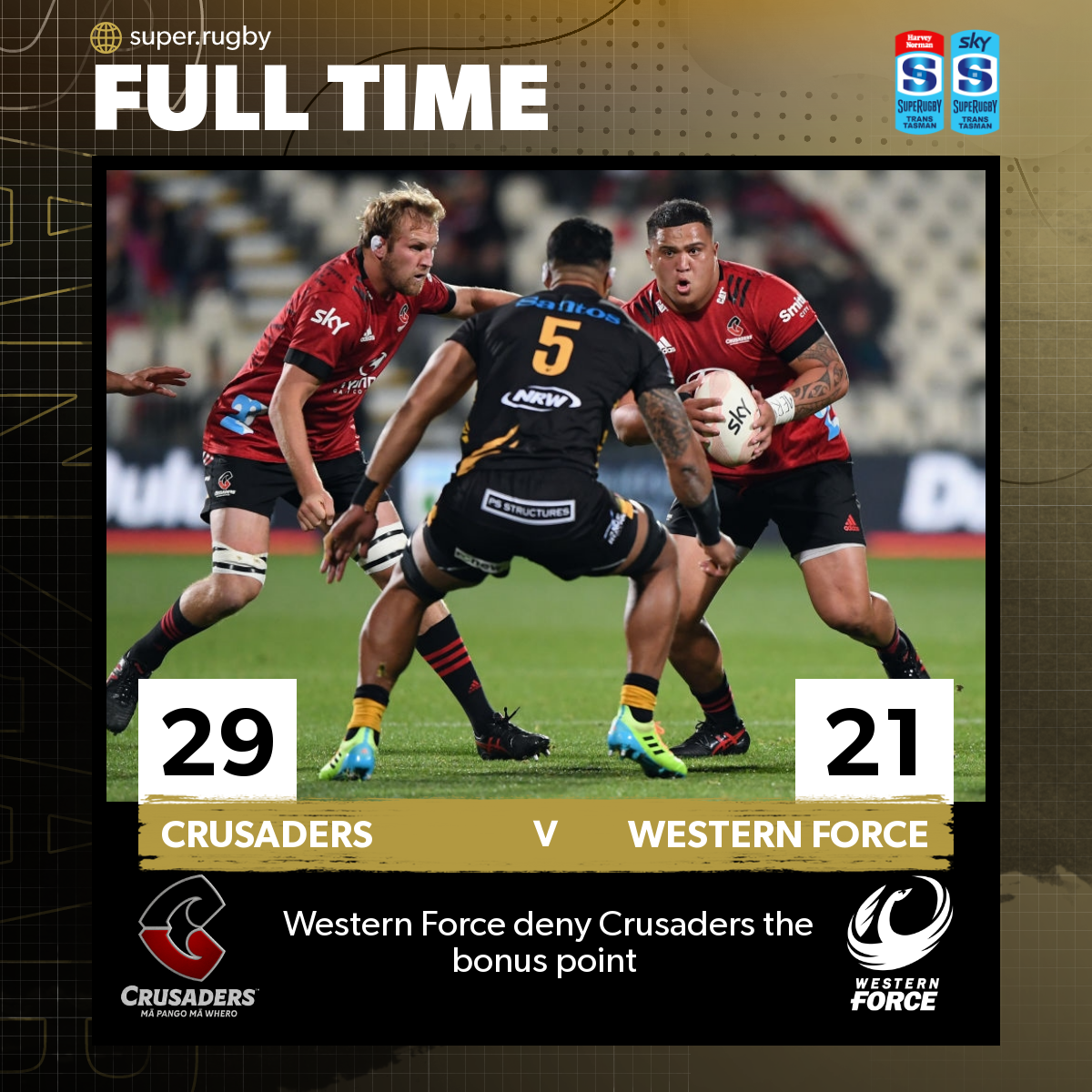