The Chiefs continued with their fine recent form despite a red card for Johnny Faauli, defeating the Hurricanes 28-26 in Hamilton.

Although both these sides were already assured of a place in the play-offs, the Chiefs needed to beat the Hurricanes by a 23-point margin to move above the men from Wellington on the overall table and, in doing so, secure a home quarter-final.

The Chiefs made their intentions known from the outset and raced into a 21-0 at half-time lead thanks to tries from Brodie Retallick, Brad Weber and Solomon Alaimolo. The Hurricanes fought back to narrow the gap to two points courtesy of tries from Wes Goosen, Blade Thomson and Riccitelli before Mitchell Karpik sealed the win for the hosts with a 73rd minute five-pointer although Julian Savea scored a consolation try for the visitors in the game’s closing stages.

Retallick opened their account when he barged over from close quarters in the seventh minute after Toni Pulu and Shaun Stevenson set him up with strong runs in the build-up.

Ten minutes later, a Hurricanes attack on the edge of the Chiefs’ 22 went awry when Weber intercepted an inside pass from Beauden Barrett before racing away to score his side’s second try.

Two minutes later, the Hurricanes suffered a further setback when their captain, Brad Shields, was forced off the field with a rib injury. The visitors continued to struggle and just before the half-hour mark Anton Lienert-Brown launched an attack down the left-hand touchline before offloading to Stevenson, who threw an inside pass to Alaimolo and he did well to outpace the cover defence on his way over the whitewash.

Marty McKenzie converted all three tries which meant the Chiefs had their tails up as the teams changed sides at the interval.

The Hurricanes put that poor start behind them, however, and showed more urgency on attack in the second half and were rewarded with two tries which meant they were trailing by seven points by the hour-mark.

First, Ben Lam set off on a mazy run from close to the halfway mark before passing to Wes Goosen, who dotted down in the 50th minute. And in the 60th minute, Blade Thomson powered his way over the try-line after the Hurricanes forwards took the ball through six phases in the build-up.

Shortly afterwards, the Chiefs were reduced to 14 men when Johnny Fa’auli was sent off for a shoulder charge to Goosen’s face. The Hurricanes made their numerical advantage count when Ricky Riccitelli went over the tryline from close quarters in the 67th minute although Jordie Barrett’s conversion attempt was off target which meant the Chiefs held a slender two-point lead.

Despite playing with 14 men, the Chiefs continued to attack and were rewarded when Karpik crossed for their fourth try after Weber set him up with a strong run before being stopped just short of the whitewash.

McKenzie added the extras which gave the hosts a nine-point buffer before Savea crossed for his try shortly before full-time. 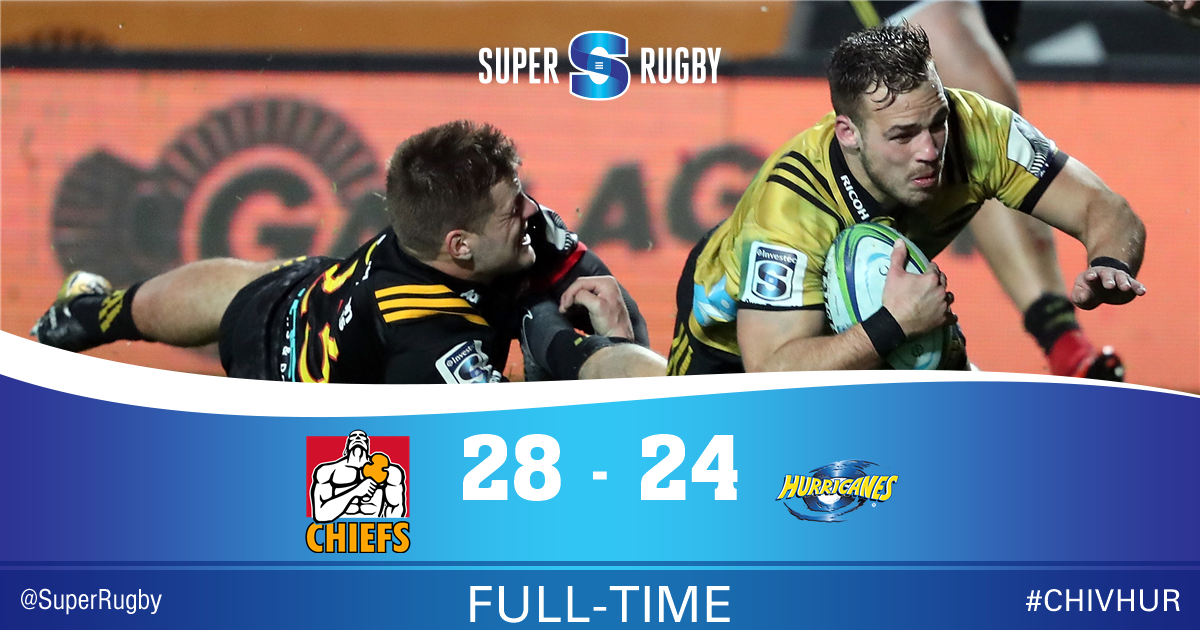