The Highlanders edged the Chiefs 30-27 in Hamilton despite being down to fourteen men for the final 13 minutes in the opening match of Super Rugby 2019.

The Chiefs outscored their opponents by four tries to three and the Highlanders also had one of their players bizarrely red-carded in the 67th minute. However, that was not enough for the Chiefs to stop the Highlanders from causing an upset at the Waikato Stadium,

It seemed to be a perfect start for the Highlanders when their persistent attack and great structure saw hooker Liam Coltman crash over the Chiefs tryline in the second minute.

However, the decision was refereed TMO and it was ruled that there was no clear grounding.

After dominating possession and territory, the Highlanders eventually opened the scoring the 15th minute when lock Pari Pari Parkinson powered over for a try. Josh Ioane added the extra two points with the conversion.

It didn’t take long for the Chiefs to hit back when No.8 Tyler Ardon burst through the Highlanders’ defence from scrum five metres out from the visitors tryline in the 19th minute.

The Chiefs were in again two minutes later. After being put into space by Anton Lienert-Brown, wing Bailyn Sullivan collected his own kick in behind the Highlanders’ defence before the ball eventually found its way to Angus Ta’avao to score his team’s second try. Brad Weber stepped up for the conversion and after 22 minutes the Chiefs were 12-7 ahead.

The visitors were struggling to cope with the pace from the Chiefs and the home side were in again in the 38th minute after some slick handling from Lienert-Brown and Nathan Harris saw Etene Nanai-Seturo run in for an excellent try.

The Highlanders did have the final say of the half with an Ioane penalty. At Half-time it was 19-10 in favour of the Chiefs.

The visitors were the first to draw blood in the second half when Ioane converted another penalty in the 44th minute to reduce the deficit to six points.

However, the Chiefs exposed the Highlanders’ defence once again a few minutes later when an Orbyn Leger crosskick found Nanai-Seturo out wide, with the wing sprinting in for an easy try.

The Highlanders found themselves back in the game in the 64th minute when Shannon Frizell was put into space by Tyrel Lomax to canter in for a try, which Ioane converted.

Things then went surprisingly bad for the Highlanders when Patelesio Tomkinson received a red card in the 67th minute when he tackled a player with his shoulder instead of his arms.

Replays suggested the incident was not that serious.

Stephen Donald made it a seven-point lead with the penalty.

With nine minutes left on the clock, Ioane brought his team back to within four points with another penalty.

Despite being down to 14 men, the Highlanders took the lead in the 76th minute thanks to replacement scrumhalf Aaron Smith who found the tryline from close range after sustained pressure in the Chiefs’22. Ioane added the extra two points with the conversion.

That was the final scoring action in the game with the Highlanders hanging on for the win. 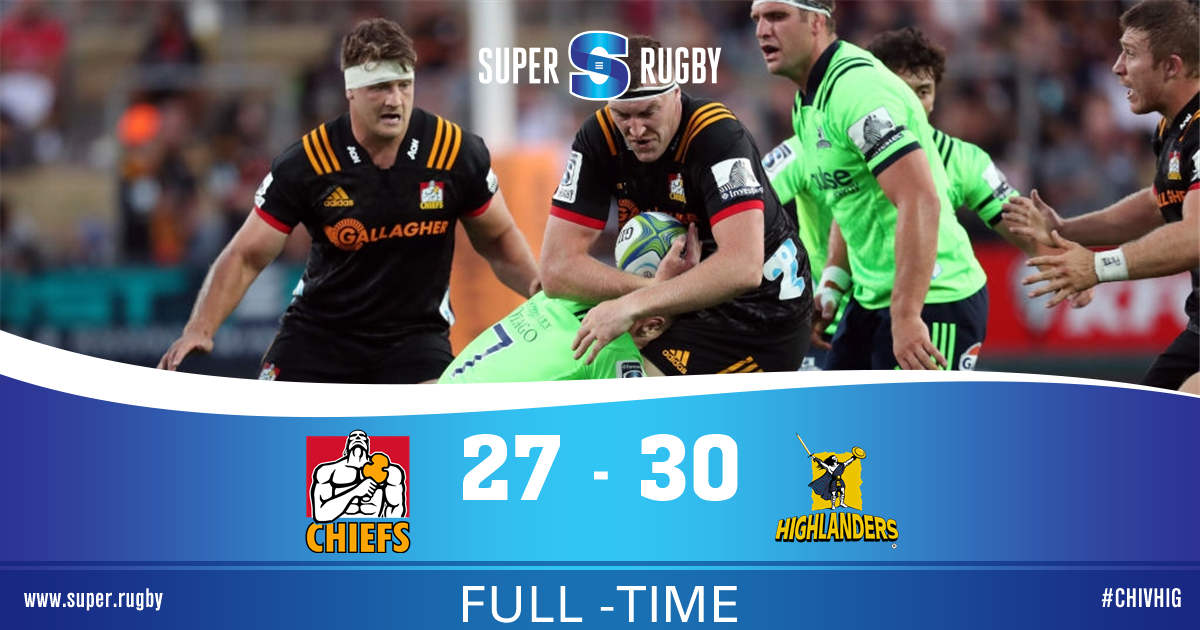