The Lions produced a masterclass of attacking rugby on Saturday as they demolished the Sunwolves, running out 94-7 winners in Johannesburg.

As expected, this was a one-sided affair with the Lions in control of proceedings from start to finish and they eventually outscored their hapless visitors by 14 tries to one.

The Lions held a comfortable 35-0 lead at half-time thanks to two tries from Kwagga Smith and further five-pointers from Ross Cronje, Jaco Kriel and Elton Jantjies.

The Sunwolves were outplayed in most facets of play and their defence was non existent at times - Kriel's try a perfect illustration of this as he shrugged off six tackles before crashing over next to the posts in the 11th minute.

Prior to that, Cronje opened the scoring when he wriggled his way over the try-line in the sixth minute and Kriel's five-pointer was followed by Smith's two tries.

The South Africa Sevens star got over for the first one in the 20th minute when he outsprinted several defenders before crossing the whitewash, and just before the half-hour mark crossed for his second five-pointer after atacking space deep inside the Sunwolves' 22.

And just before half-time, Jantjies glided past a couple of defenders and dotted down in the right-hand corner before dusting himself off to add the extras.

The Lions continued to dominate after the break and five minutes after the restart, Akker van der Merwe dotted down from the back of a lineout drive deep inside the Sunwolves' 22.

The procession continued and tries from Ruan Combrinck and another one from Kriel meant the home side brought up a half century of points by the 54th minute.

That also saw Lions head coach Johan Ackermann ring the changes with Jantjies and Andries Coetzee amongst those taken off with the game in the bag.

The Lions did not take their foot off the pedal though, and on the hour-mark Combrinck crossed for a five-pointer before Uwe Helu scored a consolation try for the Sunwolves from close quarters in the 62nd minute.

Courtnall Skosan then found himself in the clear and showed off his pace before getting over the whitewash in his 50th match for the home side before Combrinck waltzed in for his second five-pointer in the 66th minute. 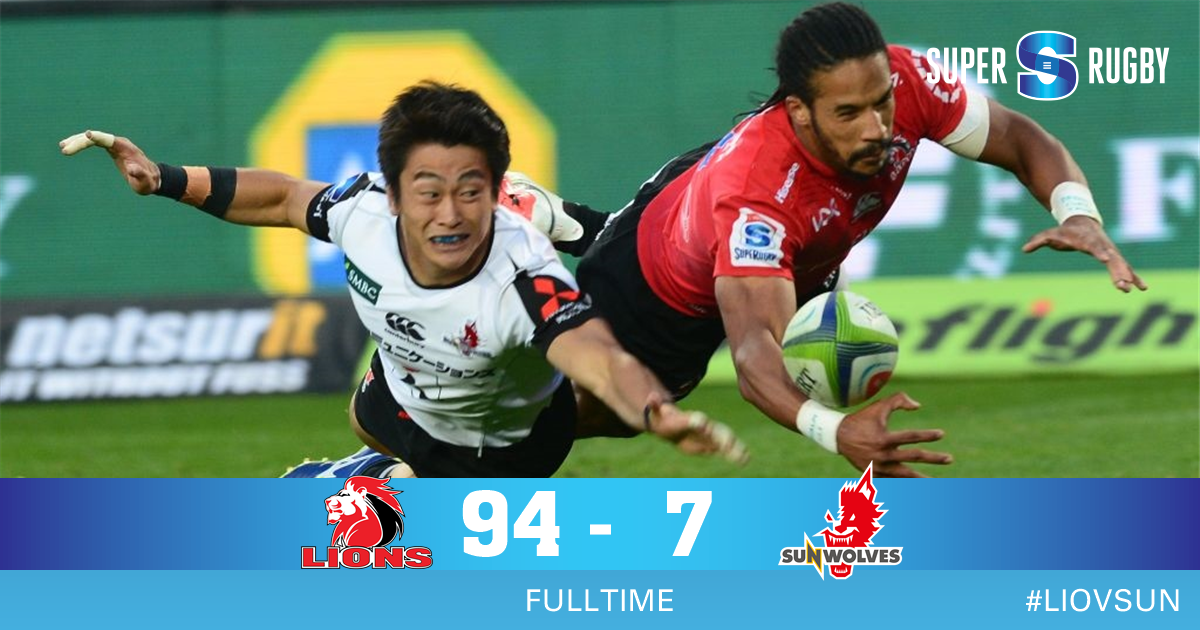 Faf de Klerk and Sylvian Mahuza came off the bench and scored deserved tries before Ruan Ackermann also dotted down in the 78th minute.

They were not done, however, and Combrinck added the final nail in the visitors' coffin when he got over for his third try in injury time.