2018 World Rugby Awards Round Up

Ireland’s Johnny Sexton and France’s Jessy Trémoulière have been named World Rugby Men’s and Women’s 15s Player of the Year 2018 in association with Mastercard respectively at the World Rugby Awards in Monte Carlo on Sunday.

On a night to remember in the presence of His Serene Highness Prince Albert II of Monaco and greats of the game past and present, the rugby family celebrated some outstanding achievers.

Sexton was named the World Rugby Men’s 15s Player of the Year 2018, becoming the first Irish player to win the award since Keith Wood claimed the inaugural accolade in 2001.

He received the award ahead of four other nominees in New Zealand fly-half Beauden Barrett – winner for the last two years – and winger Rieko Ioane and South Africa scrum-half Faf de Klerk and hooker Malcolm Marx.

Sexton, in a statement read out by Ireland captain Rory Best after losing his voice, said: "Thank you to my team-mates and coaches. If a No.10 wins an award like this, it is due to the team around him and his coaches making his job easier. We have some of the best coaches in the world and are led superbly by Rory Best.

"I’d also like to thank my wife Laura who has been with me from the start. We’ve three young kids and she does absolutely everything to allow me to concentrate on the day job. I wouldn’t have been able to have the season I’ve had without her. Thank you so much, it is an incredible honour. I look at the other nominees and I admire all of them. Any of them would have been a worthy winner."

She received the award ahead of four other nominees in France team-mates Gaëlle Hermet, Safi N’Diaye and Pauline Bourdon and New Zealand captain Fiao’o Faamausili.

World Rugby Chair Bill Beaumont said: "Tonight, we have celebrated and recognised excellence and achievement during what has been another fantastic year for rugby.

"From the players, coaches and teams who have made 2018 a year to remember, to the volunteers who are the heart of the growth of the game – we salute them all.

"Once again, it has been a difficult task selecting our Awards recipients and all our nominees are winners in their own right. I would like to congratulate the recipients for being outstanding rugby ambassadors and thank Monaco, and their Serene Highnesses for their full and enthusiastic hosting of what has been another fantastic celebration of the sport."

The award winners were selected by an independent panel, who voted on every match from the Six Nations through to the November internationals. For more details on the respective awards panels, click here.

The oldest of the nominees at 33, Sexton has been at the heart of Ireland’s climb to second in the World Rugby Rankings on the back off a Six Nations Grand Slam, first series win in Australia for 39 years and first victory over New Zealand on Irish soil. The veteran fly-half, a calming presence in the Irish backline, began the year by kicking a last-minute drop goal to secure victory over France and has started eight of his nine tests in 2018, scoring 99 points.

Her talent has never been in question but Trémoulière was truly at her mercurial best in 2018 and was for many the player of the Women’s Six Nations, a competition in which she finished as the top point scorer and joint-top try scorer. The 26-year-old blossomed with the faith placed on her as first-choice full-back, bursting through defences at will – scoring two tries against England, including the last-minute winner – and displaying her repertoire of kicking honed during her days as a footballer. She switched to sevens after the Grand Slam success, helping France reach their first ever World Rugby Women’s Sevens Series Cup final and secure their best-ever finish of third overall. Injury ruled her out of the November series with world champions New Zealand.

The first northern hemisphere recipient since England in 2003, Ireland have won 11 of their 12 tests in 2018 with the first test loss to Australia the only blot on their record. This run has seen Ireland win the Six Nations Grand Slam, a first series in Australia for 39 years and beat New Zealand for the first time on Irish soil. The results have also seen them rise to number two in the World Rugby Rankings.

A shrewd tactician and communicator, Joe Schmidt has overseen the most successful period in Irish rugby history, adding a Grand Slam title, first series win in Australia since 1979 and first win over his native New Zealand on Irish soil to his resume in 2018 to become the second Ireland coach to claim this accolade after Declan Kidney in 2009.

The winger marked his Springbok debut with a try against England in June and hasn’t looked back, starting all 13 of South Africa’s tests in 2018 and scoring six tries, including braces against Argentina and in the win over world champions New Zealand in Wellington. Blessed with pace and power, the 24-year-old was the joint top try-scorer in the Rugby Championship with five as South Africa finished as runners-up. 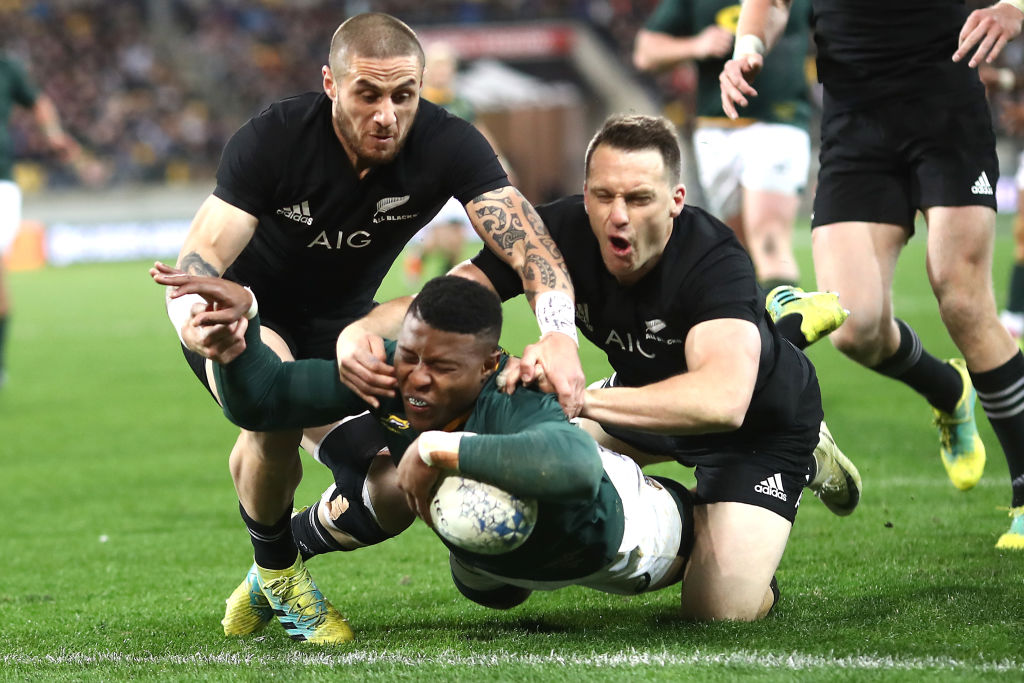 The oldest of the nominees at 32 and the 2017 recipient of this prestigious award, Perry Baker was at his scintillating best in Las Vegas in March, scoring eight tries – six of them in the knockout stages – as USA tasted success on home soil for the first time. The Eagles flyer has always had electric pace and the ability to create something out of nothing, but now has the all-round game to go with his natural speed to make him even more of a lethal finisher. The crowd favourite scored 37 tries in seven events on the 2018 series, missing the finale in Europe due to injury before returning to help USA to sixth place at RWC Sevens in San Francisco.

The youngest nominee at only 22, Michaela Blyde becomes the first to win the award twice – let alone two years in succession – after another impressive season with the Black Ferns Sevens that saw her named in the HSBC Dream Teams for both the series and RWC Sevens. The DHL Impact Player of the Series for a second time in 2018, Blyde scored 37 tries across the five rounds – second only to team-mate Portia Woodman – as New Zealand finished as runners-up after winning the Kitakyushu, Langford and Paris rounds. Blyde, blessed with electric pace and quick feet, scored another nine tries to help New Zealand claim back-to-back RWC Sevens titles in San Francisco, including a hat-trick in the final against France. The season also saw her win an historic gold medal at the Commonwealth Games.

The 34-year-old has shown strong development over the last two years, highlighted by the calibre of matches he is now being appointed to referee, and is now one of the leading referees in international rugby. A good communicator on and off the field, Gardner referred the first of his 19 tests in 2011 and took charge of the Super Rugby final for the first time earlier this year. 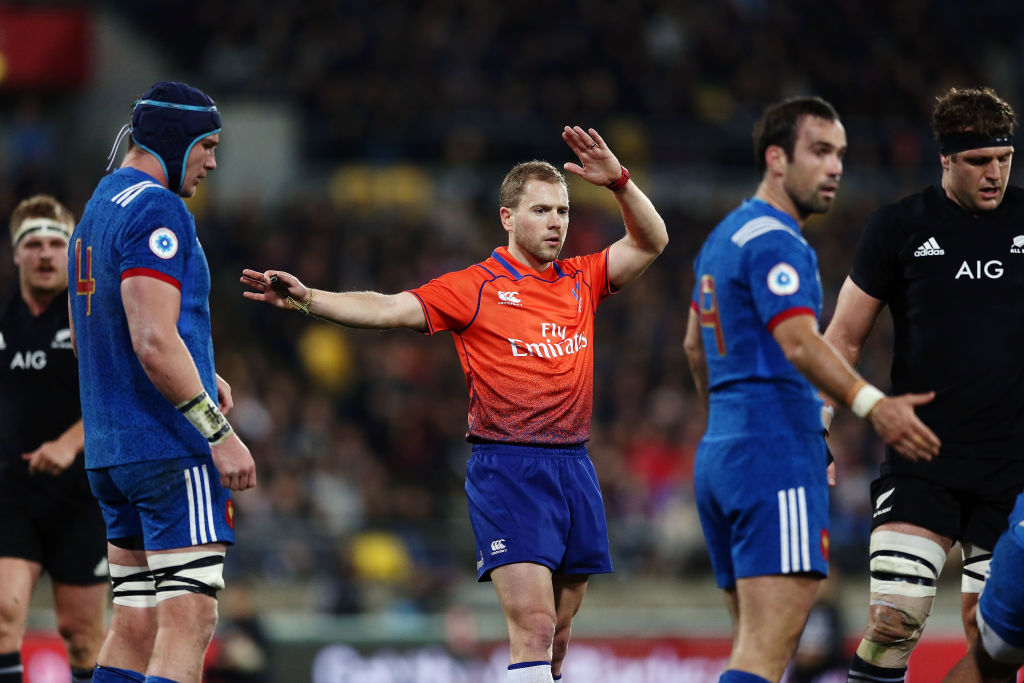 A veteran of 61 tests for his beloved Scotland from 1990-2000, Doddie Weir has shown tremendous courage and character in the two years since he was diagnosed with Motor Neurone Disease. A devasting illness with no cure, the 48-year-old has made it his mission to raise awareness of the disease and money for research through his My Name’5 Doddie Foundation. The drive he showed in his playing career now inspires those around him as he faces his biggest challenge.

The former Prime Minister of Japan and former President of the Japan Rugby Football Union has been instrumental in growing the game in Asia and more specifically in Japan with his enthusiasm and dedication culminating in Japan securing the hosting rights to Rugby World Cup 2019. His service to sport and society was recognised in 2017 when he was awarded the Grand Cordon of the Order of the Paulownia Flowers by His Majesty the Emperor Akihito, The Emperor of Japan.

Trust Rugby International pioneers unified rugby in Scotland. Through the inspirational leadership of Development Director Jamie Armstrong, it brings together able, disabled and disadvantaged young people into a close-knit team called The Clan

This free-flowing try started and finished with the All Blacks second-row. Retallick was quickly through on Australia scrum-half Will Genia in the first match of the Rugby Championship in Sydney, turning over the ball and offloading to Damian McKenzie to launch the counter-attack. Beauden Barrett and Ben Smith helped take play into the Australian half before the All Blacks recycled and swung the ball from right to left, the fly-half finding Retallick who sold Bernard Foley with an outrageous dummy and ran in from nearly 30 metres.

Stephen Moore played 129 tests for Australia, 26 of them as captain, from 2005-17 as well as more than a century of matches for the ACT Brumbies in Super Rugby. Off the field, Moore spent five years as the Brumbies’ Player Director from 2012 until his move to the Queensland Reds at the end of 2016 and also a year as a Co-Opted Director of the Rugby Union Players’ Association before bringing the curtain down on his international career with the Wallabies. The 35-year-old was an Executive Ambassador for the recent Sydney Invictus Games and has also been on the board of organisations such as Lifeline Canberra and Ronald McDonald House.

DJ Forbes amassed a record 89 tournaments and 512 matches in his 11 years on the HSBC World Rugby Sevens Series for New Zealand, scoring 153 tries and winning 26 tournaments, six series titles and Commonwealth Games and RWC Sevens gold. The 35-year-old former All Blacks Sevens captain was not only a leader on the field, though, having been a valuable conduit and voice for players throughout his career and a strong advocate for the development of women’s sevens, improved player welfare standards, player wellbeing and Olympic inclusion. Forbes’ desire to see players thrive has seen him work with the New Zealand Rugby Players’ Association and International Rugby Players on athlete well-being and development programmes.