The Lions made a superb start to their Australasian tour when they claimed an emphatic 29-0 victory over the Waratahs in Sydney on Friday.

The win consolidates the Lions' position at the top of the South African standings and although the Waratahs also occupy the top spot in the Australian Conference standings, that situation could change if the Melbourne Rebels beat the Bulls in Pretoria on Saturday.

The match started cautiously and we had to wait until the 21st minute for the opening points of the half when Madosh Tambwe crossed for a deserved try after Andries Coetzee and Kwagga Smith laid the groundwork with strong carries in the build-up.

The rest of the half was evenly contested but although both teams had scoring opportunities, they would not trouble the scoreboard during this period.

In the 25th minute, Tambwe found himself in the clear, midway between the halfway mark and the Waratahs' 22. He opted to kick ahead but was blocked by Alex Newsome although Hacjivah Dayimani gave chase and was stopped in front of the Waratahs tr-line by Taqele Naiyaravoro. 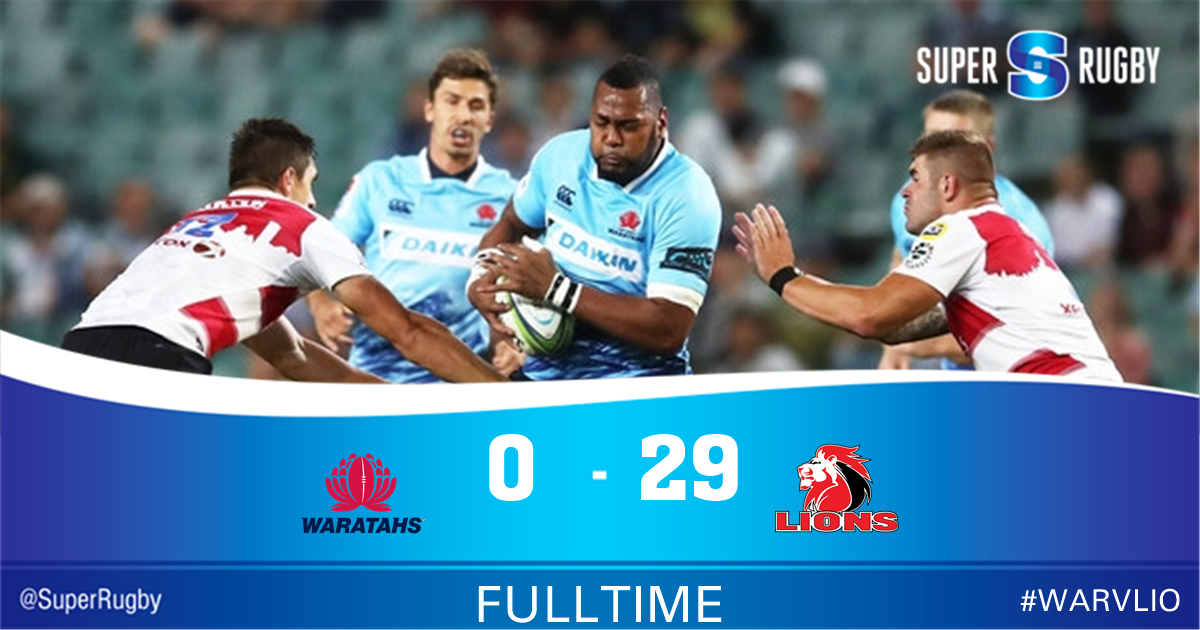 Newsome was penalised for his infringement on Tambwe and the Lions opted to take a scrum where the winger's kick landed inside the Waratahs' 22 but could not add to their points tally.

And in the 34th minute, the Waratahs had a chance to open their account when Kurtley Beale and Michael Hooper traded passes before Hooper did well with a strong run which took his side into the Lions 22. He offloaded to Newsome, who was tackled into touch by Ruan Combrinck five metres from the Lions' try-line.

That meant the Lions held a slender lead at the break but the visitors took control of proceedings during the early stages of the second half when they scored two tries.

The first one came four minutes after the restart when, from a line-out deep inside the Waratahs' 22, flanker Smith broke through the middle of the set-piece before crashing over.

And in the 50th minute, Harold Vorster gathered a loose pass from Lionel Mapoe close to the Waratahs try-line before stepping past a couple of defenders on his way over the whitewash.

The rest of the half was a tight affair although the Waratahs committed a plethora of unforced errors which contributed to their demise. In the 71st minute, Elton Jantjies made it 22-0 when he slotted a penalty after Harry Johnson-Holmes was blown up for illegal scrummaging.

The visitors continued to dominate and sealed their win in the 77th when Marnus Schoeman broke away from a lineout in similar fashion to Smith and like his fellow flanker he too powered his way over the try-line.