New Zealand made a statement when they dominated Argentina 39-0 in the Rugby Championship clash on the Gold Coast on Sunday.

As the scoreline suggests, New Zealand dominated proceedings and they were rewarded with five tries – which secured them a deserved bonus-point – with Luke Jacobson (2), Rieko Ioane, Sevu Reece and Dalton Papalii crossing the whitewash.

Their other points came via the boots of the Barrett brothers with fly-half Beauden adding a conversion and a penalty and full-back Jordie slotting three conversions and a penalty.

The opening exchanges were tightly contested with both sides showing a willingness to run the ball but neither team would score points during that period.

The match came alive in the 10th minute when Reece took the ball into contact inside the Pumas’ 22 before he was brought to ground inside New Zealand's 22. From the next phase Beauden Barrett launched an attack and when he offloaded to Ioane, the ball was knocked backwards by Bautista Delguy before the All Blacks outside centre dove on it behind Argentina’s try-line.

Just like the early stages, the next 25 minutes was scoreless although there were a few occasions when New Zealand came close to scoring a try again. In the 14th minute, a teasing chip kick from the older Barrett was gathered by his brother Jordie, who crossed for what the All Blacks believed was their second try but that effort was ruled out after television replays revealed that he had dotted down on the dead-ball line.

And shortly afterwards centre Ioane tore the Pumas defence to shreds with a brilliant line break. He was soon inside Argentina's 22 and tried to offload to Reece on his outside but the pass was intercepted by Santiago Cordero, who was bundled into touch close to his corner flag.

The All Blacks were eventually rewarded in the 34th minute when Beauden Barrett kicked a penalty before Reece scored their second try from close quarters shortly afterwards.

Just before the interval, Argentina suffered a further setback when Pablo Matera was sent to the sin-bin after he committed a cynical defensive foul deep inside his half.

The All Blacks set up a lineout drive from the resulting penalty and they were rewarded when Papalii crossed the whitewash off the back of the maul on the stroke of half-time. Jordie Barrett added the extras which meant the All Blacks were leading 22-0 at half-time.

The All Blacks started the second half in a similar vein to the way they ended the first and in the 46th minute fly-half Barrett set off on a mazy run before throwing a backhanded pass out to Jacobson, who went over for their fourth five-pointer.

Although they were in control of proceedings, the All Blacks could not extend their lead over the next 20 minutes although they had a try disallowed in the 66th minute when Ethan Blackadder's effort was chalked off for a double movement. However, their opponents were reduced to 14 men again when Enrique Pieretto was yellow carded for a professional foul on defence close to his try-line.

With a one man advantage, it did not take long for the All Blacks to capitalise and soon after Jacobson scored his second try after breaking off the back of a scrum on Argentina’s five-metre line.

That score knocked the wind out of the Pumas' sails and there was more misery for them in the game's closing stages when Jordie Barrett slotted an easy penalty which gave his team a deserved victory. 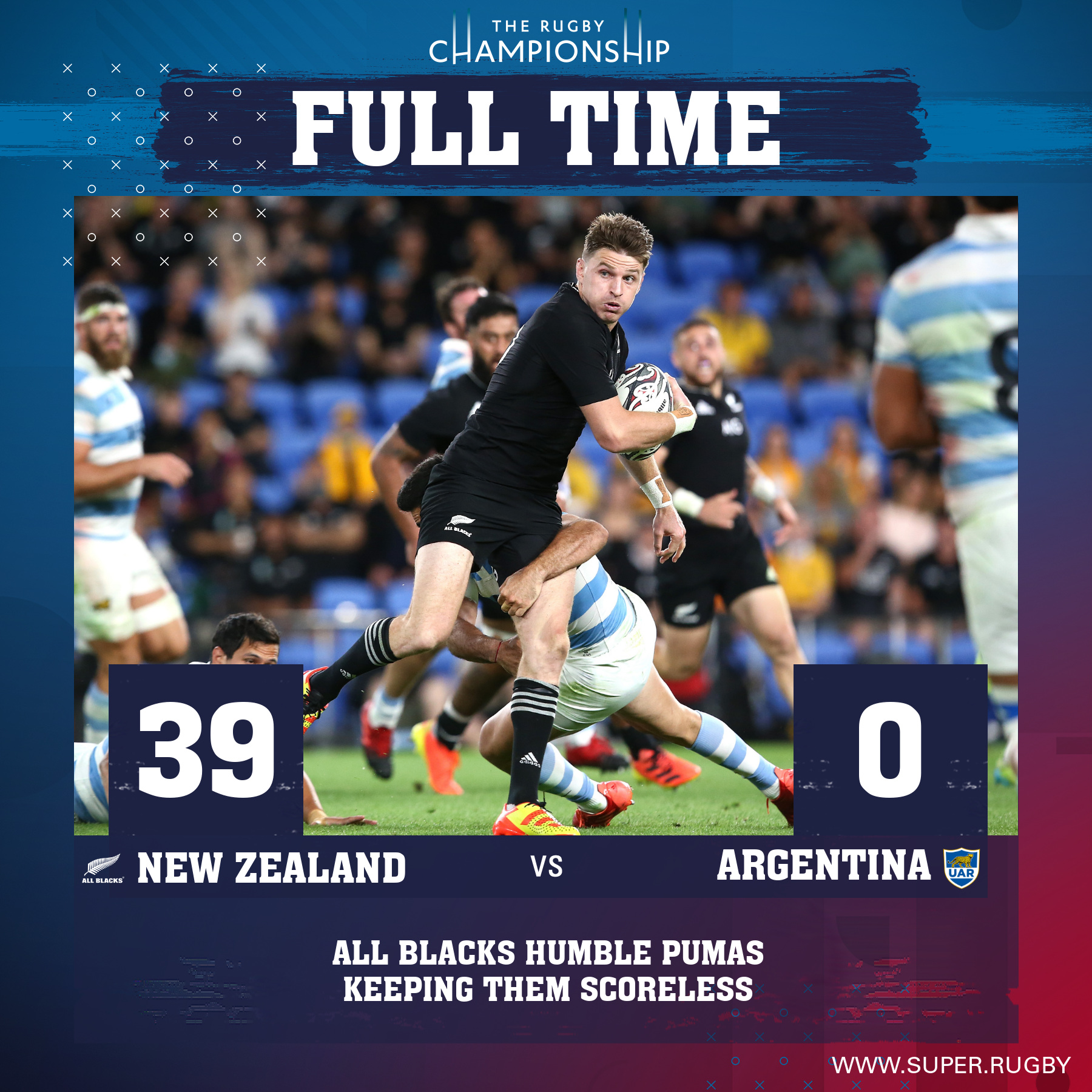