Time flies when you are having fun with Super Rugby Aotearoa already halfway through - so who are currently the players on song and will it affect who wins?

Using the Opta Index, we have crunched the numbers to come up with a team of the season for the Aotearoa campaign so far, forwards and backs and highlight their contributions.

The Crusaders, Hurricanes and Blues each have two representatives in the backline. Joining them at full back is the Chiefs’ Damian McKenzie who has made the most carries (57) of any player in the tournament so far and is one of only two to have made 50+ alongside the inside centre in this XV Ngani Laumape (51). Indeed, Laumape (20) and the two selected wingers, Will Jordan (24) and Mark Telea (20) form the trio of players to have beaten 20+ defenders this season. Laumape has also been solid defensively – his tackle success rate (32/35 – 91.4%) is the best of any back (min. 10 tackles). Rieko Ioane (Blues – 2) is the only outside centre to have crossed the try line more than once in Super Rugby Aotearoa.

Richie Mo’unga (Crusaders -pictured below) and TJ Perenara (Hurricanes) have secured the fly-half and scrumhalf positions respectively. Mo’unga (58) tops the point scoring charts for Super Rugby Aotearoa at the halfway mark, thanks to one try and more successful goal kicks (21) than any other player in the tournament. Meanwhile, Perenara is the only scrumhalf to have gained 100+ metres (153), as well as leading his position in defenders beaten (8), clean breaks (5) and offloads (5).

Into the forward pack now where number eight Hoskins Sotutu (Blues) has been a force of nature in the campaign as the only player to have made 40+ in both carries (40) and tackles (42). Highlanders’ duo Dillon Hunt and Shannon Frizell occupy both flanker positions; no player in Super Rugby Aotearoa has made more tackles than them (Hunt – 60 and Frizell – 48). In addition, only one other forward has won as many turnovers as Dillon Hunt (5 – also Lachlan Boshier). 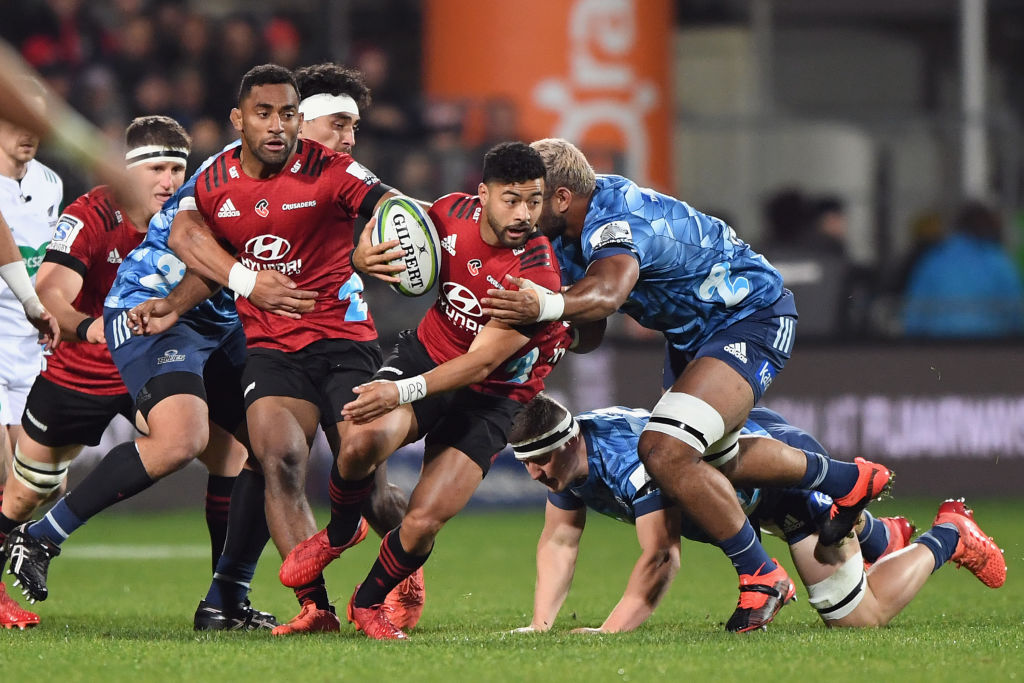 The locks are Patrick Tuipulotu (Blues) and James Blackwell (Hurricanes), the two players who have made more lineout steals (3 each) than any other individual in Super Rugby Aotearoa. Dane Coles (Hurricanes) has continued his high standards at hooker, gaining 6.5 metres per carry – his teammate Asafo Aumua (6.5) is the only other player in his position to have made more the five metres per carry. Coles has also seen three of his offloads result in break assists, more than any other player overall in Super Rugby Aotearoa.

Alex Hodgman (Blues – 42) has made five more tackles than any other prop in the competition, with only his teammate in this line up (Michael Alaalatoa – 27) boasting more carries amongst such players than Hodgman’s 25.

As we approach the next half of Super Rugby Aotearoa, it will be intriguing to see how many of these players retain their positions and if any new contenders can usurp them.