The Blues were too good for the Highlanders as they ran in five tries for a comfortable 31-21 victory in Dunedin on Sunday.

In a fast-paced and entertaining encounter, the visitors were full value for their win as they held the upper-hand for long periods and eventually outscored the Highlanders five tries to two.

Finlay Christie led the way for the Blues with a brace of five-pointers and their other tries were scored by Akira Ioane, TJ Faiane and Ofa Tuungafasi while Beauden Barrett added two conversions and a penalty.

For the Highlanders, Ash Dixon and Shannon Frizell scored tries and Josh Ioane added a conversion and three penalties.

The Blues dominated from the outset and took the lead in the seventh minute courtesy of a try from Ioane. The number eight did well to gather at the back of a strong Blues scrum on the Highlanders’ five-metre line before barging over despite a tackle from Scott Gregory.

Three minutes later, the visitors increased their lead courtesy of a brilliant try from Christie. This, after Caleb Clarke did well to collect a cross-field kick from Barrett before bumping off Josh Ioane and offloading to Rieko Ioane. He set off towards the Highlanders try-line and did well to draw in the final defender before throwing an inside pass to Christie, who crossed for a deserved try.

Barrett added the extras before Ioane opened the home side’s account courtesy of a penalty in the 15th minute. With points on the board the Highlanders’ confidence grew and five minutes later they narrowed the gap when Dixon crossed the whitewash for a converted try off the back of a lineout drive deep inside Blues territory.

On the half-hour mark, the Highlanders took the lead when Ioane added his second penalty after Karl Tu’inukuafe was blown up for offside play on defence.

That did not deter the Blues, who continued to attack from all areas of the field, and shortly afterwards Clarke and Christie combined brilliantly before the scrum-half got a pass out to Faiane and he cantered in for his team’s third try.

Barrett slotted the conversion to give the Blues a 17-13 lead but Ioane added his second penalty in the 36th minute to narrow the gap to a point.

The Blues finished the half stronger though and were rewarded when Tuungafasi showed great strength and leg drive to cross for a try from close range which meant the Blues held a 24-16 lead at half-time.

The visitors continued where they left off after the restart and three minutes into the second half Christie crossed for his second five-pointer, after great work from Barrett, Tony Lamborn and Clarke in the build-up.

The next 15 minutes was frantic as the Highlanders tried to claw their way back but they committed too many errors and in the 56th minute Barrett succeeded with a penalty which gave his side a 32-16 lead.

The Highlanders gave their all as they tried to haul in the visitors but were met by a ferocious defensive effort from their opponents.

In the 74th minute, the Blues were reduced to 14 men when Sione Mafileo was yellow carded for a professional foul on defence deep inside his 22 and shortly afterwards the Highlanders capitalised on their numerical advantage when Frizell went over for their second try from close quarters.

Although the Highlanders continued to attack during the game’s dying moments, they could not add to their points tally and the Blues held on for the win which also secured them the Gordon Hunter Memorial Trophy. 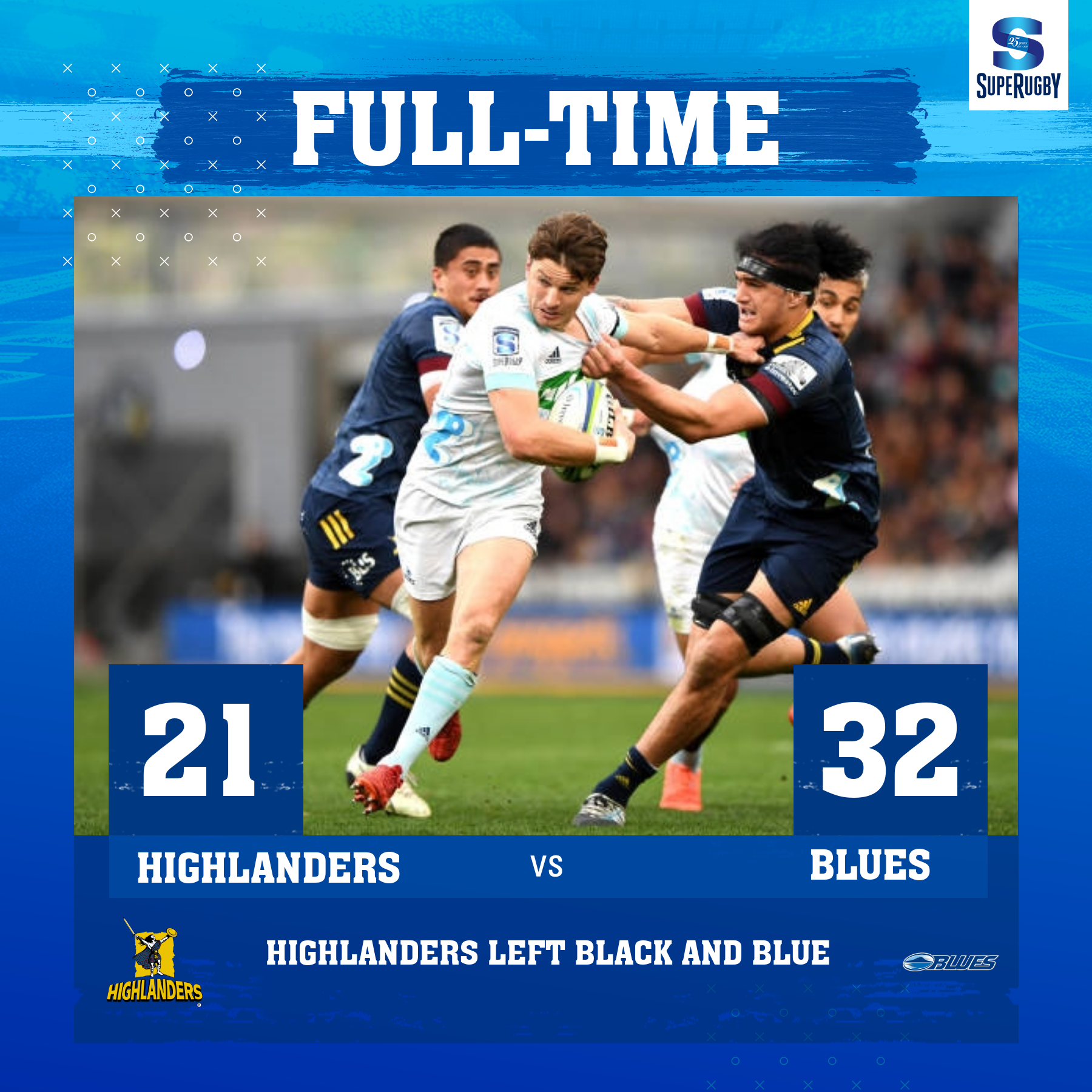