The Blues ran out deserved 30-20 winners in their opening Super Rugby Aotearoa match against the Hurricanes in front of a packed house at Eden Park on Sunday.

As expected, this was an entertaining affair with plenty of end-to-end action throughout the game in front of a capacity crowd. The opening half was evenly contested but the Blues took control of proceedings after the interval and eventually outscored their opponents by 16-7 during the second period.

Caleb Clarke, TJ Faiane and Dalton Papali’i scored the home side’s five-pointers and Otere Black finished with a 15-point haul after succeeding with three penalties and as many conversions.

For the Hurricanes, Dane Coles, Ben Lam and Jamie scored tries and Jackson Garden-Bachop added a penalty while TJ Perenara succeeded with a conversion.

The opening exchanges were cagey, highlighted by plenty of kicking for territory from both sides with the Hurricanes holding a slight edge and they took the lead in the ninth minute courtesy of a Garden-Bachop penalty.

Shortly afterwards, the match came alive when the Blues launched an attack from inside their half. Rieko Ioane received the ball on his 10-metre line and set off on a superb run before offloading to Clarke just outside the Hurricanes’ 22. The wing still had work to do but did brilliantly to cut infield before crossing for the opening try.

The Hurricanes didn’t take long to respond and in the 15th minute Coles found himself in space out wide on the edge of the Blues’ 22. The All Blacks hooker showed a superb of speed before powering through a desperate tackle from Beauden Barrett on his way over the try-line.

The topsy-turvy nature to this game continued and the Blues regained the initiative midway through the half when Faiane crossed for their second try after good work from Barrett and Mark Telea in the build-up.

Despite that score, the Hurricanes were soon on the attack inside the Blues’ half and from a scrum close to the home side’s try-line, the ball was shifted wide to Lam, who had an easy run-in over the whitewash. Garden-Bachop’s conversion attempt was wide of the mark which meant the Blues held a slender 14-13 lead at half-time.

The hosts were fastest out of the blocks after the restart and extended their lead in the 49th minute when Papali’i gathered a perfectly weighted grubber kick from Faiane before crossing for his side’s third try.

Black added the extras and succeeded with two penalties which gave his side a 27-13 lead by the hour-mark. The Hurricanes needed a response but continued to make mistakes and in the 66th minute Black slotted another three-pointer off the kicking tee which gave his side a comfortable 30-13 lead.

The visitors upped the ante on the attack during the game’s closing stages and after an extended period camped inside the Blues half, Booth went over for their third try, from close quarters.

That score and Perenara’s conversion added some respectability to the score although the Blues will be happy with their performance and end result as they dominated for long periods. 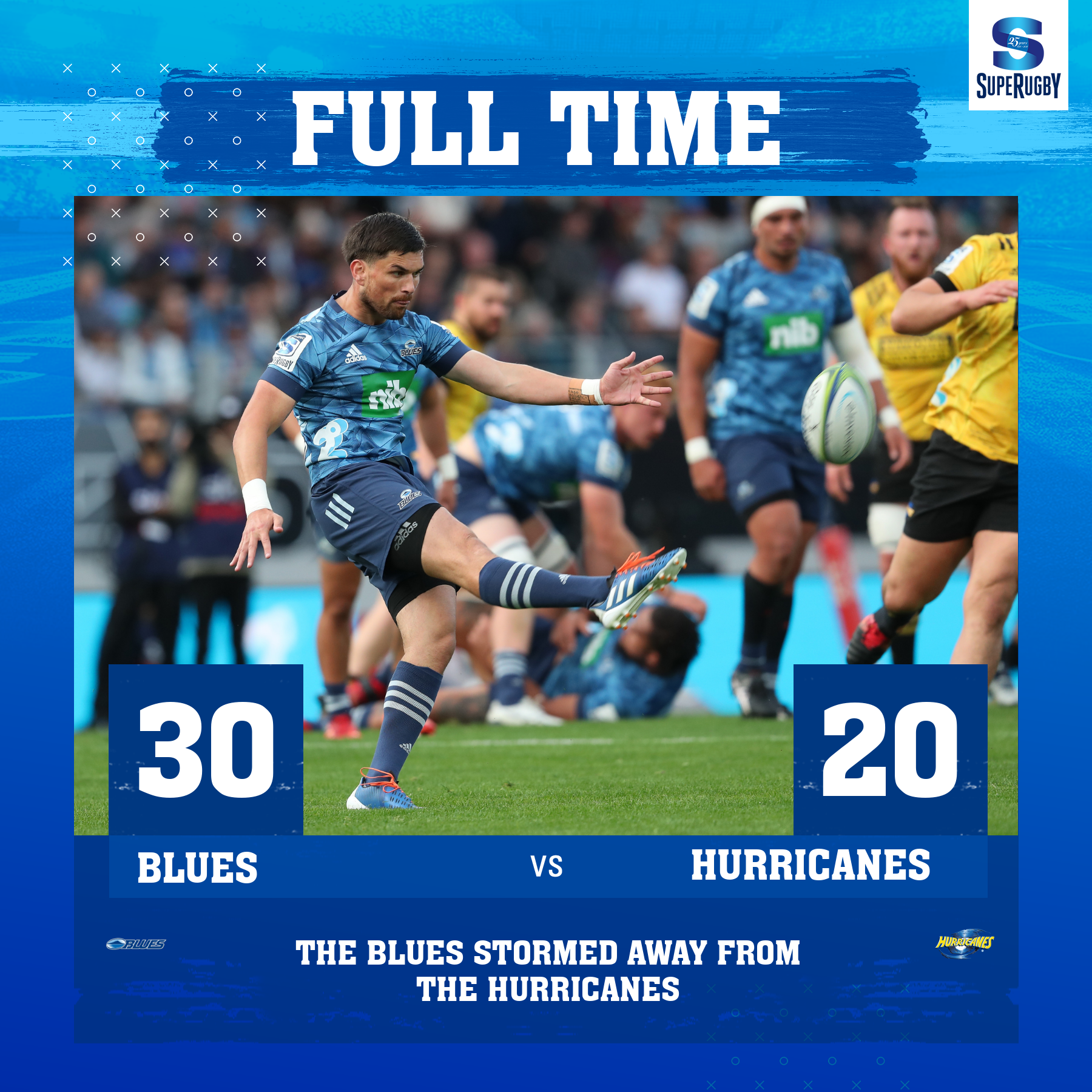