The Blues held on against a determined Highlanders team to win a trilling Eden Park encounter 33-26 on Friday.

The victory is a significant one for the home side as it ends a 20-match winless run against New Zealand teams.

As expected, this was a fast-paced and entertaining affair with both sides employing expansive game-plans but although the lead changed sides several times, the Blues finished stronger and eventually outscored their opponents by four tries to two.

Rieko Ioane led the way in that department with a deserved brace and Melani Nanai and Patrick Tuipulotu also crossed the whitewash. Harry Plummer also impressed as he kicked two penalties and a conversion while Otere Black added a penalty and a conversion.

For the Highlanders, Luke Whitelock and Tevita Li scored tries and Marty Banks finished with a 16-point contribution courtesy of two conversions and four penalties.

The opening half was evenly contested with the two teams giving the ball plenty of air and after Banks opened the scoring with an early penalty, the Blues took the lead when Ioane beat several defenders on a 40-metre run before crossing for the opening try.

Despite that setback, the Highlanders did not take long to respond and in the 18th minute a strong scrum from their pack on the Blues’ five-metre line resulted in Whitelock gathering at the back of the set-piece before diving over.

Although the teams continued to play expansively, the next 10 minutes was characterised by several unforced errors from both sides and a Plummer penalty were the only points scored during that period.

The home side would finish the half stronger though and in the 34th minute Ioane scored his second try after Nanai and TJ Faiane combined brilliantly in the build-up.

But just before half-time, Banks slotted his second penalty which meant the Blues held a slender 15-13 lead at half-time.

Banks also added the first points of the second half when he succeeded with another three-pointer off the kicking tee in the 49th minute but the topsy-turvy nature of this game continued when Plummer added his second penalty shortly afterwards.

The next 10 minutes proved to be frantic as both sides tried to gain the upper-hand and tries from Li and Nanai meant the sides were deadlocked at 23-23 by the hour-mark.

Another Banks penalty gave the Highlanders the lead again but the visitors suffered a setback when Waisake Naholo was yellow carded for a lifting tackle on Tom Robinson.

The Blues made full use of their numerical advantage as they finished stronger and were rewarded when Tuipulotu powered his way over the try-line from close quarters before Black slotted a long-range penalty in the 78th minute which sealed a memorable win for the Blues. 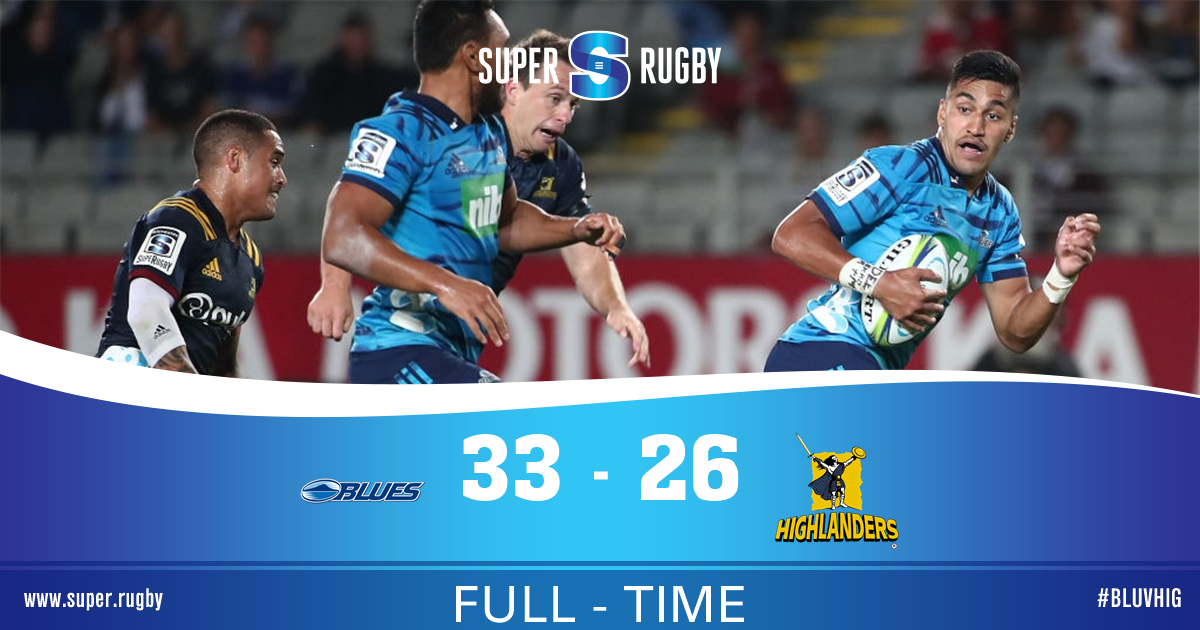