Blues down Waratahs in Newcastle

The Blues bounced back from their opening-week loss to the Chiefs with an encouraging 32-12 bonus-point victory over the Waratahs in Newcastle.

While the first half was evenly matched, the Auckland outfit blew away their opponents in the second, scoring four tries to one, with newcomer Mark Telea picking up a hat-trick.

The Blues started brightly to put the Tahs under some early pressure and were rewarded with their opening try in the 11th minute.

After forcing Karmichael Hunt to give away a penalty for holding on and kicking for touch inside the Waratahs 22, No 8 Hoskins Sotutu put the Australian outfit on the back foot with a strong run, allowing the ball to be recycled quickly out wide where Blake Gibson forced his way over the line despite the attentions of two defenders.

After a missed conversion, the Tahs had an opportunity to get back within two points when Thomas Faiane was penalised for a high tackle, but Will Harrison was unable to succeed with his first shot at goal.

Not long after, the Blues found themselves in a brilliant position with a scrum right in the centre of the field inside the Waratahs 22, and while their attack came to nothing, they were playing with a penalty advantage, allowing Stephen Perofeta to convert the easy kick for three more points and an 8-0 lead.

The Tahs were proving to be their own worst enemies as they tried to get back in the match. A promising attacking opportunity came to nothing when Michael Hooper got himself isolated and was penalised for holding on, while a silly knock-on from their own lineout gifted possession back to the Blues.

But with time running out in the first half it was the Blues' turn to commit a few basic mistakes, as a series of penalties - first at scrum time and then at the ruck - gave the Tahs a late chance to set up an attacking lineout in the opposition 22.

After the forwards came close to getting it over the line, the ball was moved out wide where it went from Harrison to Kurtley Beale and back to Harrison before finally going out to Lalakai Foketi for the score. Harrison converted the kick to bring the Tahs to within a single point of the Blues' lead heading into half-time.

Whatever coach Leon MacDonald told the Blues during the break, it clearly worked a charm, as the Auckland outfit came out firing with two quickfire tries.

English centre Joe Marchant scored the first within two minutes of the restart after scything through the Tahs defence by running a superb straight line off TJ Faiane.

And little over a minute after Perofeta kicked the conversion, winger Mark Telea was over for the first try of his Super Rugby career after collecting a clever little kick-through from Sotutu and dotting down.

It was a Waratahs turnover inside their own 22 that led to Telea's try, and though Perofeta missed the conversion, the Blues now held a formidable 20-7 lead.

Perofeta had another chance to extend the lead with a shot at goal not long after but was wide of the goal, and two minutes later the Waratahs were handed a lifeline when Sotutu received a yellow card for a high tackle on Hunt.

The home side soon made their numerical advantage count as Mark Nawaqanitawase dove over in the corner, but Beale couldn't add the extras, having taken over the kicking duties after Harrison left the field.

The Blues were soon back to 15 men and after both teams rung the changes in the final 15 minutes, it was the visitors who finished strongest with two more quick tries in the closing stages.

Telea wrapped up the win with his second try following another Blues counter-attack from a Tahs handling error, and the winger secured his hat-trick in injury time with a strong hand-off from a set-piece move to secure the bonus point for good measure. 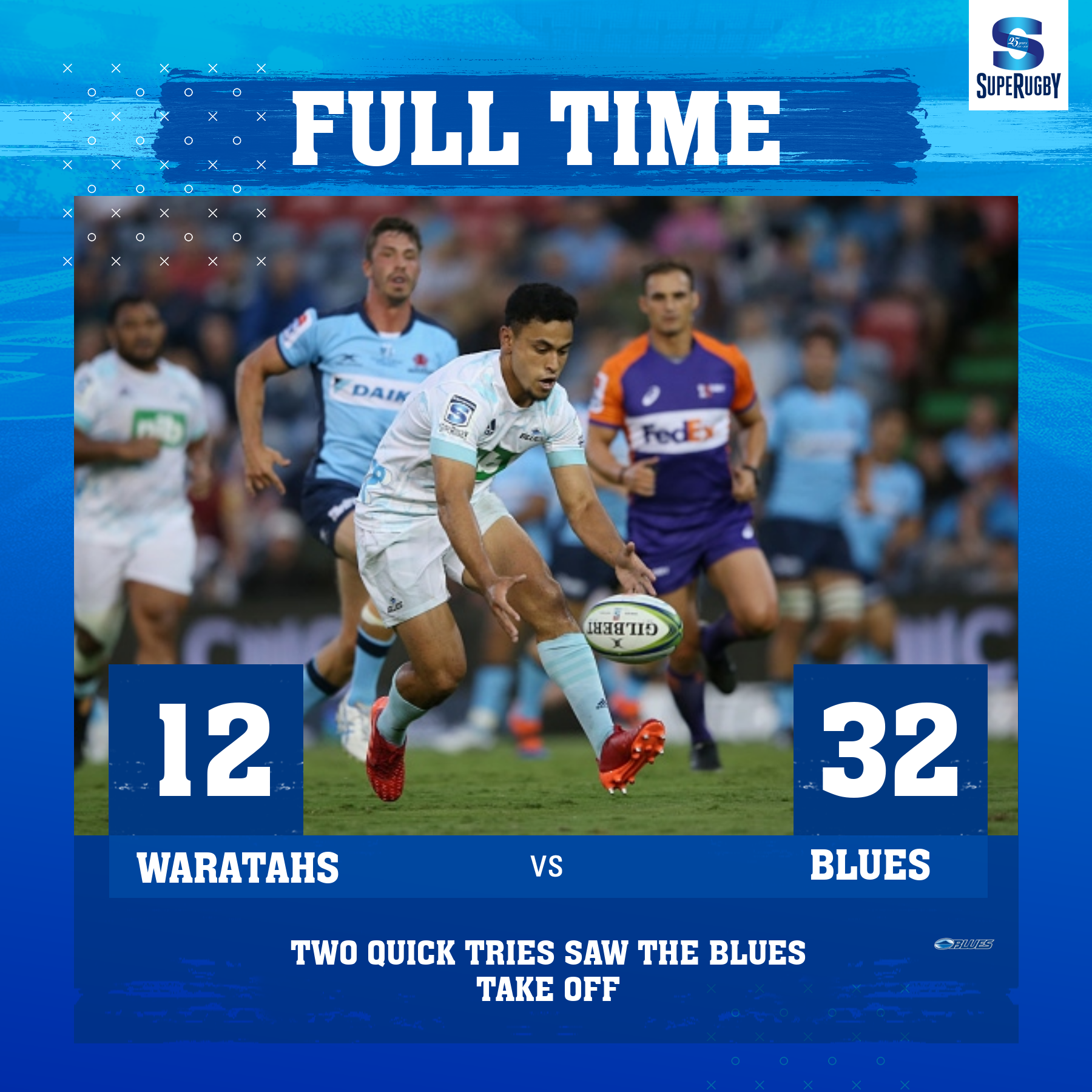