The Blues held off a late fightback from the Western Force at Eden Park to clinch a 31-21 victory and book their place in the Super Rugby Trans-Tasman final.

The home side went into the half-time break with a comfortable 28-0 lead as the Force failed to give a good account of themselves in the first half. However, the visitors managed to turn it around after the break, scoring two tries of their own to set up a tense finish.

But the comeback came too late in the clash as Patrick Tuipulotu's Blues held firm in the final minutes to seal a final date with Highlanders.

The Blues came into this crunch encounter knowing a win over the Force would be enough to secure their place in the Super Rugby Trans-Tasman final, after the Crusaders' bonus-point victory over the Rebels in Melbourne earlier in the day.

And they made a strong start to the encounter, claiming the lead after just 10 minutes of play as Hoskins Sotutu broke the line and raced over on the left side of the field after some great work in the build-up by Mark Telea. Otere Black added the extras to make it 7-0 to the hosts.

Despite the bright start from the hosts, they battled to make further inroads in the Force half of the pitch. Possession of the bal changed hands several times but the visitors never really threatened as a ferocious Blues defence held firm.

The Blues eventually regained control of proceedings as the half wore on and they finally got the breakthrough they were looking for on 28 minutes. Telea bagged the all-important try after a sustained period of pressure, racing over in the corner after Zarn Sullivan flashed a long pass out wide. Black calmly added two more with the conversion to put the Blues firmly in control.

It didn't take the Blues long to add to their advantage, Rieko Ioane stealing the ball at a lineout before the ball made its way to Dalton Papalii, who had the simple task of dotting down under the posts. Black again added the extras to make it three from three conversion attempts.

And the floodgates opened for the Blues as they surged forward, looking to put the result beyond any doubt.

The Force were still reeling from the third try when the Blues struck again on the stroke of half-time, Hoskins Sotutu dotting down and Black adding the extras to make it 28-0 to the hosts.

While the first half had proved to be a very one-sided affair, the Western Force managed to steady the ship in the second stanza.

After a bright start, the Force eventually opened their account in the 49th minute, Feleti Kaitu'u dotting down after a hard-fought maul. Skipper Ian Prior added the extras to further reduce the deficit.

The try gave the Force a visible lift and they would further reduce the deficit in the 56th minute, Tevita Kuridrani crashing over the line out left of the post and Prior slotting the conversion to make 28-14.

The Blues managed to recover their composure, however, Black converting a penalty in front of the posts after the Blues collapsed a promising maul.

Just a few minutes later, the Blues managed to add another try through Telea, only for the referee to chalk it off following a review from the TMO. Substitute Ray Niuia was cited for foul play in the build-up, earning a yellow card in the process.

Niuia's yellow card took the wind out of the Blues' sails, forcing them to sit back and defend as the Force cranked up the pressure.

And the pressure finally took its toll on the Blues defence as the Force reduced the deficit to just ten points with a few minutes remaining, veteran Rob Kearney dotting down in the left corner after some quick hands from substitute Domingo Miotti, who added the extras with a pinpoint conversion.

However, it all proved too little, too late for the Force as the Blues held on in the final stretch to book a date with the Highlanders at Eden Park in the Final of Super Rugby Trans-Tasman. 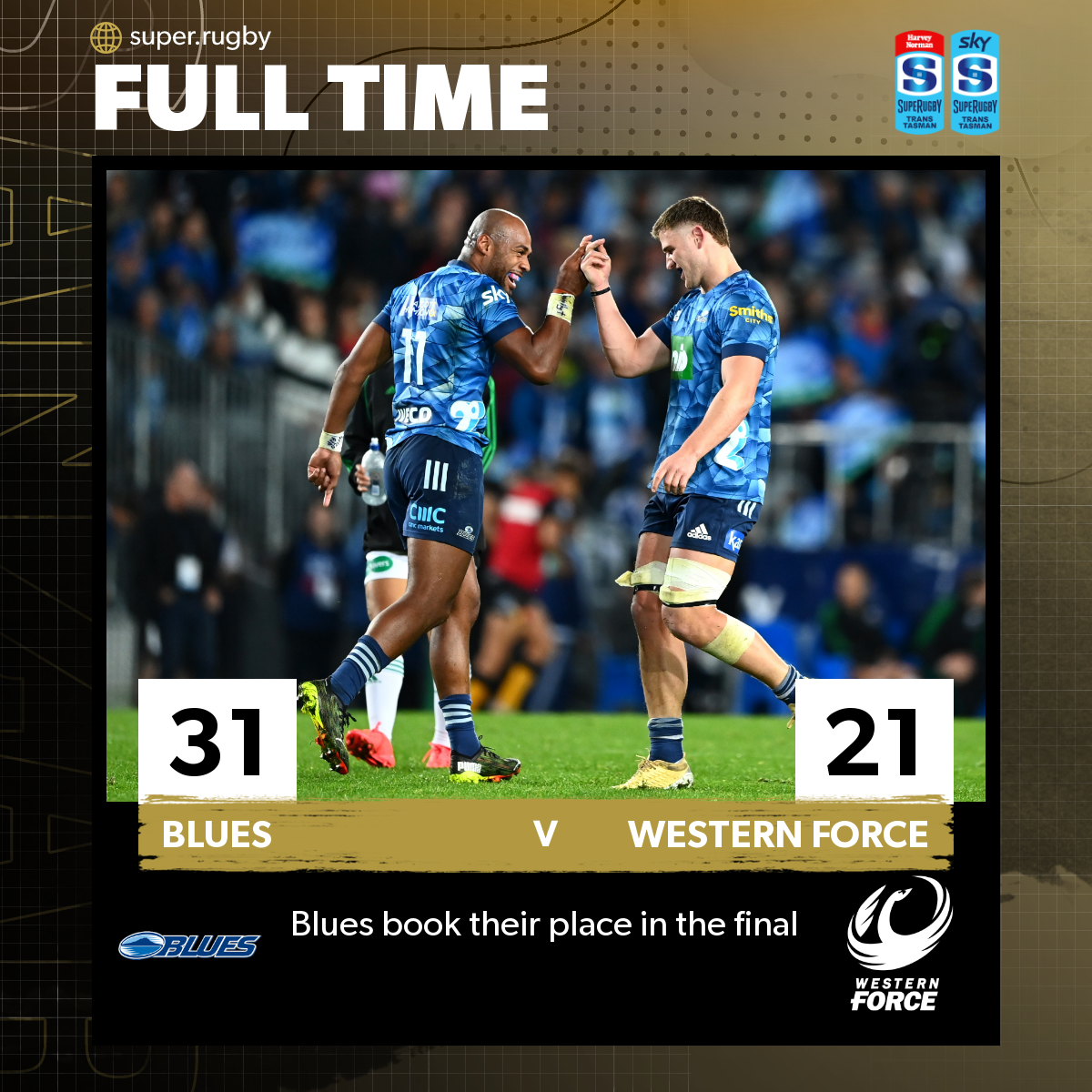