The Blues held on for a hard-fought 32-29 victory over a tenacious Waratahs outfit in Auckland.

Both teams entered the match on 15 points from six matches, having won three and lost three, although the Blues were coming off three straight wins after a poor start to their campaign.

That turnaround in form was quickly evident as the Kiwi outfit opened with a penalty goal and a converted try in the first 10 minutes.

It was a poor kick from the Waratahs that handed the Blues possession straight back after they'd lost it at the line-out that resulted in the opening five-pointer.

The ball was worked up the field before being offloaded from captain Patrick Tuipulotu to flyhalf Otere Black to veteran Ma’a Nonu in the midfield and finally to flanker Tom Robinson out wide, who went over in the corner.

Seven minutes later, the Blues had their second try courtesy of winger Caleb Clarke, who was in the right place at the right time to receive a pop pass from Ma’a Nonu and cross the whitewash.

Black added the extras to make it 17-0 to the home side inside the first quarter.

To the Waratahs' credit, however, they bounced back superbly to all but erase the deficit at half-time.

The first try came courtesy of a clever cross-field kick near the Blues tryline from Bernard Foley, allowing Israel Folau to grab it out the air and go over to become the leading try scorer of all time in Super Rugby.

Then, just before half-time, the Waratahs scored their second try after winning a lineout near the Blues tryline and crashing over from a driving maul, with Will Miller emerging with the ball in hand.

Foley added the extras for both tries as it ended 17-14 to the Blues at half-time.

The Blues were always likely to hit back and hit back they did seven minutes after the break. They attacked the blindside from five metres out with Black offloading an inside pass to Thomas Faiane, who went over for their third try.

The conversion was missed, however, and it took the Waratahs just eight minutes to respond with their third try of the evening. It was Folau who straightened the line on the attack and found winger Alex Newsome, who dotted it down in the corner to reduce the deficit once more.

Foley kicked the conversion to make it a one-point ballgame, 22-21 to the Blues, but the home side soon re-established a more healthy lead after a messy pass from a Tahs lineout allowed Akira Ioane to create the space for Nonu, who dove in under the poles before Black added the extras.

In the 63rd minute, Foley kicked a three-pointer after Sam Nock played the ball from an off-side position, but Black soon returned the favour with a penalty kick to keep the visitors at bay.

That was how it stayed until the dying moments of the match, as the determined Waratahs picked up their fourth try through substitute scrumhalf Jake Gordon, who picked the ball up from behind the scrum and produced a sniping run to go over in the corner.

Foley couldn't add the extras, however, and with just a couple of minutes remaining, the Blues were able to hold on to possession and grind out the victory to make it four wins in a row. 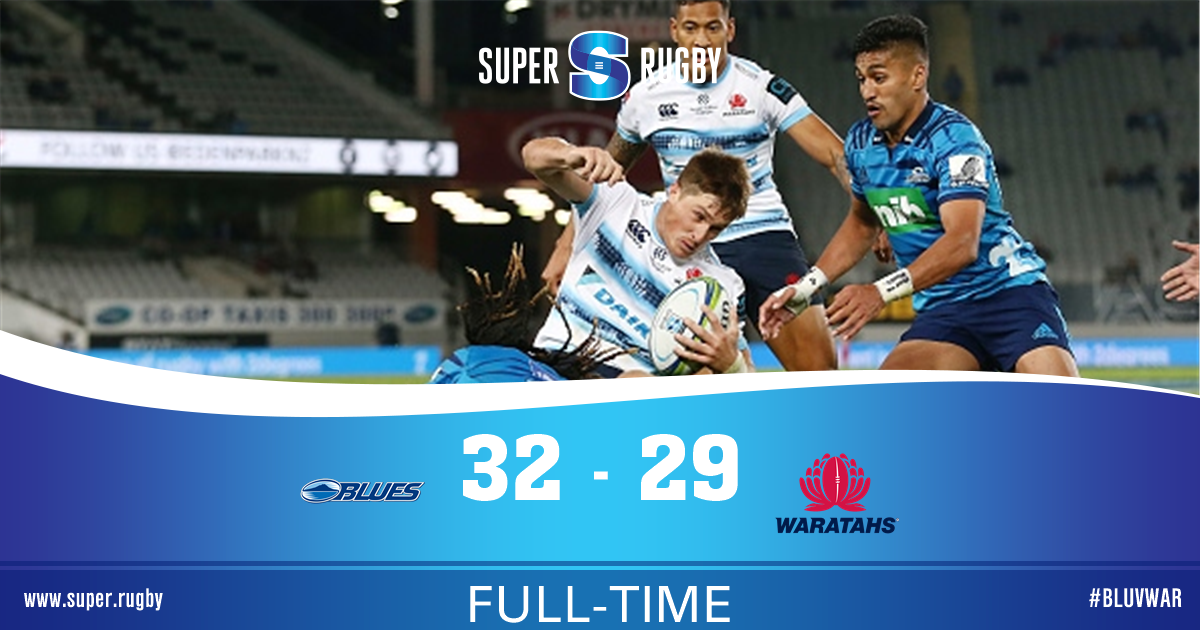