Bryce Heem bagged a hat-trick as the Blues claimed a 48-21 victory over the Waratahs in an entertaining Super Rugby Trans-Tasman clash at Eden Park.

The Blues forged a big lead early on but allowed the Tahs back into the game, eventually taking a 22-14 lead into the break. And the hosts produced a much-improved performance after the break as they added for more tries to claim what would turn out to be a comfortable win, extending NSW's losing streak to 11 games.

The Blues started the encounter on the front foot and were awarded a penalty after just four minutes of play after the Waratahs strayed offside, Otere Black converting to give his side an early lead.

And the Waratahs were dealt a serious setback a couple of minutes later as Max Douglas was forced off with what looked a hand injury, with Jack Whetton brought on to replace the injured lock.

The hosts continued to pile on the pressure and following a nice run by Christie, they managed to drive over the line. They were held up by the Waratahs, though, leading to a penalty in front of the sticks.

However, they turned down the three points in favour of taking a scrum and that decision paid dividends as, after some strong carries by Gerard Cowley-Tuioti and skipper Tom Robinson, the ball was sent to the right to Bryce Heem, who stepped inside his man before darting over the line for a fine finish, Black failing to add the extras.

The Waratahs briefly threatened to reduce the deficit a few minutes later but saw their lineout stolen before substitute Whetton was forced off for a head injury assessment after attempting to halt Akira Ioane in full flight.

Jack Dempsey replaced Whetton, and the Waratahs were again forced to make another change 10 minutes later as second-five Lalakai Foketi was replaced by Mark Nawaqanitawase, who wasn't even originally listed in the 23.

With the Waratahs looking disjointed after the series of enforced changes, the Blues struck again in the 28th minute. Tahs turned the ball over after a quick tap penalty and the Blues showed no mercy as Bryce Heem fed his captain for a simple finish out wide on the right, with Black converting to make it 15-0 to the hosts.

The Blues were still basking ion the glow of their second try when the Waratahs struck back a couple of minutes later, loosehead prop Angus Bell making a 25-metre run after the hosts coughed up possession in their own half, Will Harrison adding the extras.

The home side managed to recover their composure after letting the Tahs back in the game and very added a third try in the 38th minute. Rieko Ioane claimed the lineout ball and after spearheading the drive, hooker Kurt Eklund powered the ball over the line. Black converted to give the Blues some breathing room as they went into the break leading 22-14.

The Waratahs started brightly after the break and came agonisingly close to scoring a try in the 48th minute only for Blues halfback Christie to intercept a Harris pass.

And the Blues would go on to add to their advantage a couple of minutes later, Sullivan keeping the ball alive after going to ground before Ioane snapped up the ball and darted around the ruck before racing over with the defence out of position, Black again adding the extras to make it 29-14.

The Tahs' hopes of mounting another comeback were dealt a hammer blow in the 58th minute as tighthead prop Harry Johnson-Holmes was shown the yellow card after being ruled to have collapsed the maul following a lineout. The Blues took immediate advantage, producing a huge scrum shunt as the Waratahs brought it down, leading to an automatic seven-pointer.

However, despite being a man down, the Waratahs would claw back seven points as hooker David Porecki barreled over the line, Harrison converting to make it 36-21 after 64 minutes.

The try only served to fire up the Blues, with right winger Heem claiming his second try of the game with ease after being found out on the right in plenty of open space. Black failed to find the mark, sending his conversion wide of the left post.

The Blues rubbed further salt in the wounds of the Tahs in the dying minutes of the clash as Black plucked an intercept before feeding Heem, who raced 50 metres upfield before dotting down to complete an impressive hat-trick. Black added the extras to make it 48-21.

The Waratahs fought on valiantly but were denied a consolation try in the 80th minute as Blues sub Sam Nock denied the onrushing Whetton on the line, dislodging the ball. 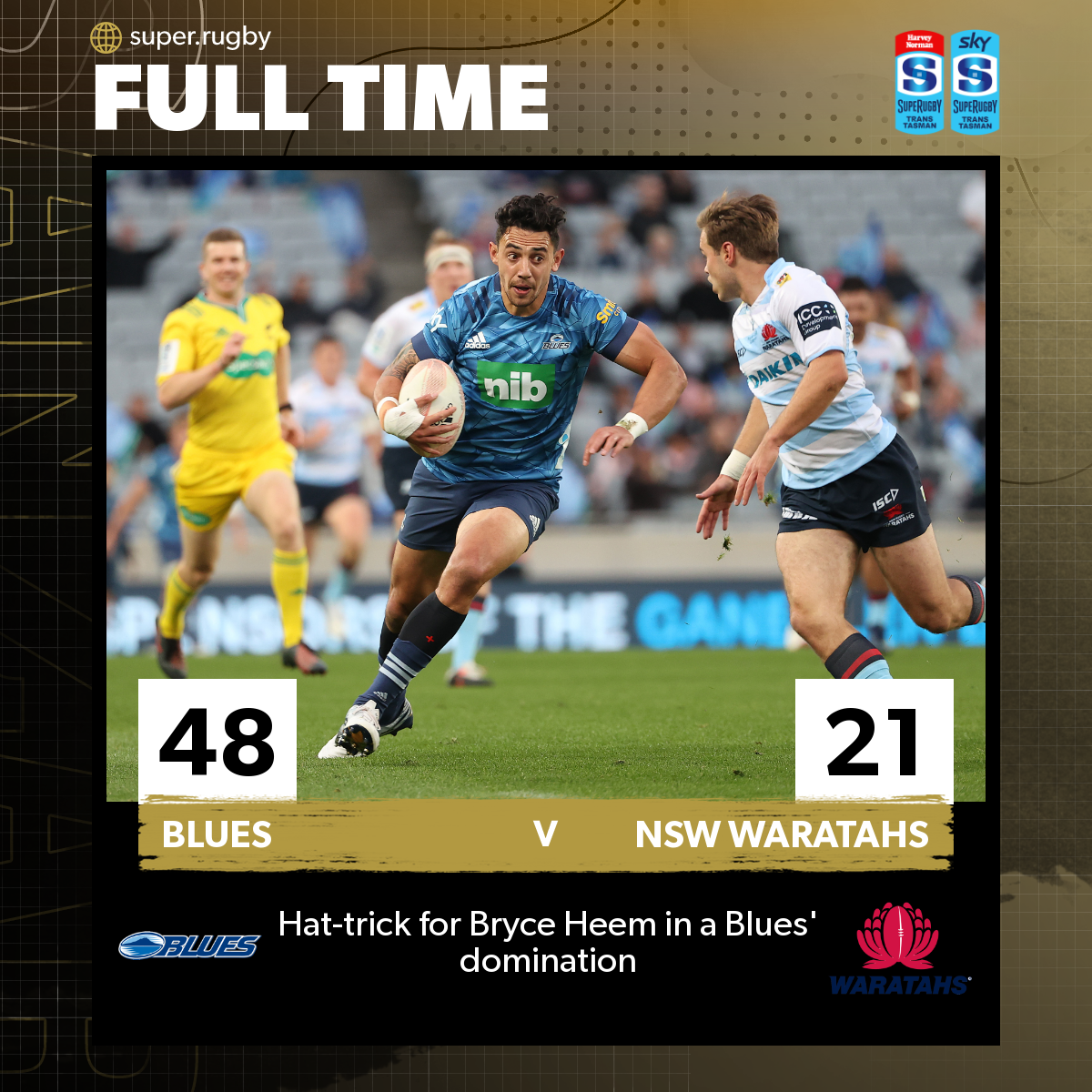