The Blues made it two victories out of two in Super Rugby Aotearoa after battling past the Chiefs 24-12 in Hamilton on Saturday.

Tries from number eight Hoskins Sotutu and wing Mark Telea were added to points from Otere Black and Beauden Barrett as the visitors backed up last week’s home triumph over the Hurricanes with an impressive success on the road, showing a level of maturity that has too often been missing in recent seasons.

For the Chiefs, their points all came via the boot of Damian McKenzie, as they slumped to their second straight defeat in the competition looking short of answers.

The wet weather somewhat limited the amount of expansive rugby on show and it therefore became a battle of territory and who would make the fewest mistakes.

Eventually, the Chiefs’ pressure told and after 11 minutes a Blues ruck offence allowed McKenzie to open the scores from in front to reward their early efforts.

The Blues would respond admirably, however, and the decision to go for the corner paid off in spades when Sotutu barged over under the posts for a 7-3 lead.

McKenzie reduced that margin five minutes later on the quarter-hour mark after Blues tighthead prop Ofa Tuungafasi was pinged for side entry.

The Blues’ penalty count was beginning to mount in Hamilton and referee Ben O’Keeffe gave them a warning on 24 minutes. Fortunately for the visitors, a crucial lineout steal eased the mounting pressure and sent the Chiefs backpedalling, before a long-range penalty attempt from McKenzie dropped just wide of the post.

Black followed McKenzie with a narrow miss shortly after but he made no such mistake from in front on 37 minutes after the Chiefs were offside in defence.

However, the game would be back to a one-point clash at 10-9 heading into the break when McKenzie punished Dalton Papali’i for his ruck offence, the flanker also being sent to the sin-bin by O’Keeffe due in part to the team offences that the Blues had racked up. He would miss the opening 10 minutes of the second half.

His absence would not be costly for the Blues as he returned on 50 minutes with that scoreline intact. In fact, the Blues were then enjoying good field position.

That would reap some reward too three minutes later when Chiefs flanker Lachlan Boshier was penalised for side entry, allowing Black to make it a 13-9 contest.

McKenzie would cancel that out moments later, making it 13-12 after Tuungafasi was too slow to roll away from the ruck, leaving the contest delicately poised.

With time ticking on, the next score was going to be pivotal and it was the Blues sensing blood as they motored into the 22, with Patrick Tuipulotu carrying well. That led to a penalty advantage being played but Barrett opted to take a free shot that paid off as his drop-goal nudged his new team into a four-point lead.

That was extended to seven on 69 minutes when Barrett was handed the kicking duties, nailing a three-pointer after the Chiefs offended at a lineout in their 22.

The Blues were now growing in confidence and a well-worked move created space for Telea to dive over on the right wing to make it 24-12, Barrett missing the extras.

To their credit, the Chiefs would fight back late on but the Blues were not to be denied as they kept them at bay, frustrating their hosts to pull off the superb victory. 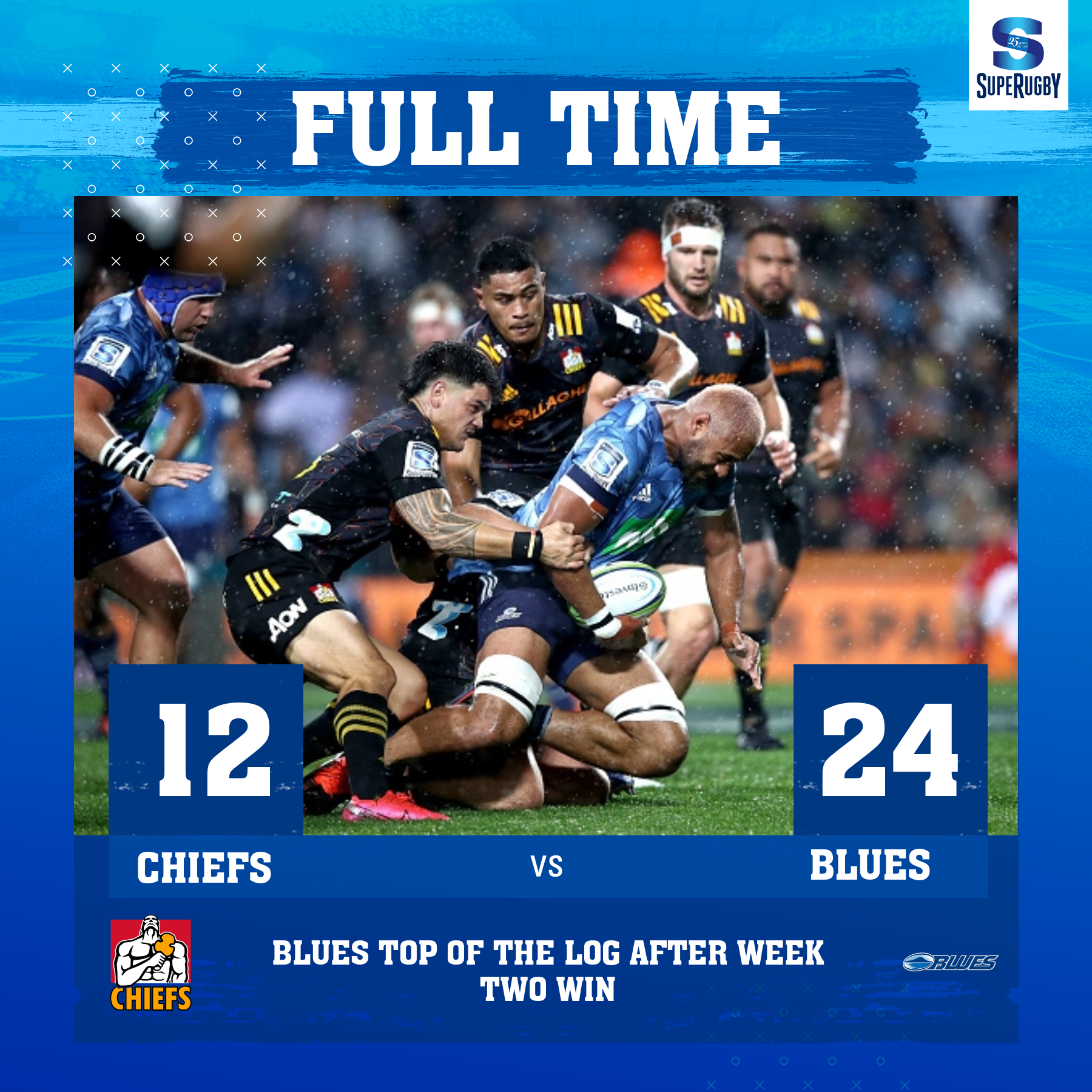