The Blues narrowly came out on top over the Highlanders as they edged a hugely physical battle 23-15 to clinch the Super Rugby Trans-Tasman crown in front of a crowd of 36 000 at Eden Park.

While both teams reached the final by virtue of their scintillating attacking play, it was their defences that were really tested on the day, as opportunities proved much harder to come by with a trophy on the line.

The Highlanders in particular had to make nearly twice as many tackles as the Blues in a heroic defensive effort that very nearly saw them come from behind to pull off an unlikely victory.

But ultimately the Blues were the better team on the night and deserved the win, dominating territory and possession to outscore the Highlanders two tries to nil.

This is the fourth Super Rugby title for the men from Auckland but the first since 2003, and the relief at finally getting over the line after an 18-year wait was evident when the final whistle blew.

The Highlanders made an encouraging start to the match, looking dangerous inside Blues territory and executing at a high pace to put the home side under some early pressure. When the referee awarded them a penalty right in front for hands in the ruck, they decided to take the points on offer.

After a muted start, the Blues starting to find some rhythm around the 10-minute mark, although their first real attack inside Highlanders territory was thwarted when a 50/50 pass failed to go to hand.

The Blues needed a bit of a lift and they got it via their scrum, as a shove inside Highlanders territory ended with the visitors getting pushed back and conceding the penalty, allowing the home side to kick for the corner.

While the Highlanders managed to repel the initial rolling maul, another penalty followed and the Blues opted for a scrum. From behind the pack, Otere Black found Mark Telea with a crossfield kick to the far side, and the winger beat the last defender before dotting down in the corner.

That try led to a definite momentum shift in the match, as the Blues suddenly found themselves well on top, bossing territory and possession and forcing the Highlanders into all-out defence.

With 23 minutes gone, disaster struck for the visitors when Ash Dixon went in high in the tackle right by his own try line and got a yellow card for his troubles. The Highlanders were probably relieved when the Blues opted to take the three points on offer from the ensuing penalty, as another try looked on.

The Blues were also dealt a blow by that high shot as it was on their flyhalf Black, who had to leave the field for a HIA, bringing Harry Plummer onto the field. Black would pass the assessment and return to the field shortly before half-time.

A few minutes later, it was the Blues' turn for some dangerous play as Jona Nareki took out Hunt in the air as he jumped for a high ball, though the referee felt only a penalty was necessary.

When a rare foray into Blues territory led to a Highlanders penalty shortly after, they were only too happy to milk the clock and take the points on offer with Dixon still off the field.

The Blues nearly scored on the stroke of half-time after breaking the line and bursting into the Highlanders 22, but the visitors' scrambling defence managed to avoid the seven-pointer. The officials missed a clear forward pass in the build-up, however, allowing Plummer to add three more points from the kicking tee as they headed back to the shed with a 13-6 lead.

The Blues came out firing in the second half and very nearly scored a try straight away, only to be held up over the line. When they decided to take a shot at goal moments later, Black surprisingly missed from virtually right in front.

And the home side continued to count the missed opportunities as another try went begging in the 51st minute when a knock-on right by the line saw the Highlanders get out of jail again.

Shortly before the hour-mark, a rare Highlanders foray into Blues territory saw the visitors earn a penalty, with Hunt obliging to bring them back to within four.

Worryingly for the Blues, who had enjoyed a long period of dominance without adding to the scoreboard, the momentum was starting to shift towards their opponents, who had well and truly weathered the storm. The Highlanders were soon back in Blues territory, earning another penalty which Hunt kicked over to make it a one-point ballgame.

And barely a minute had passed when the Blues found themselves under pressure again following a high-ball take, allowing the Highlanders to swoop in over the ball and get the penalty call. Up stepped Josh Ioane on this occasion to take the kick at goal, making no mistake to give the Highlanders the lead for the first time since the start of the match.

The Blues desperately needed a response, and they found it when the Highlanders infringed inside their own territory from the kick-off. The Blues wasted little time in pointing to the posts as Plummer, recently returned to the fray, converted from the spot to put them back in front with 10 minutes to play.

But after producing a hugely committed defensive effort for nearly 80 minutes, the match was ultimately decided by a sloppy turnover inside the Highlanders 22, as Hoskins Sotutu pounced to steal the ball at the breakdown before bursting through several defenders and offloading to Jonathan Ruru, who passed it to Blake Gibson for the try.

Plummer nailed a tricky conversion to put the Blues eight points clear, and with just minutes to play there was no way back for the Highlanders from there, with the hosts holding on to clinch their first Super Rugby title in 18 years in front of a jubilant Eden Park crowd. 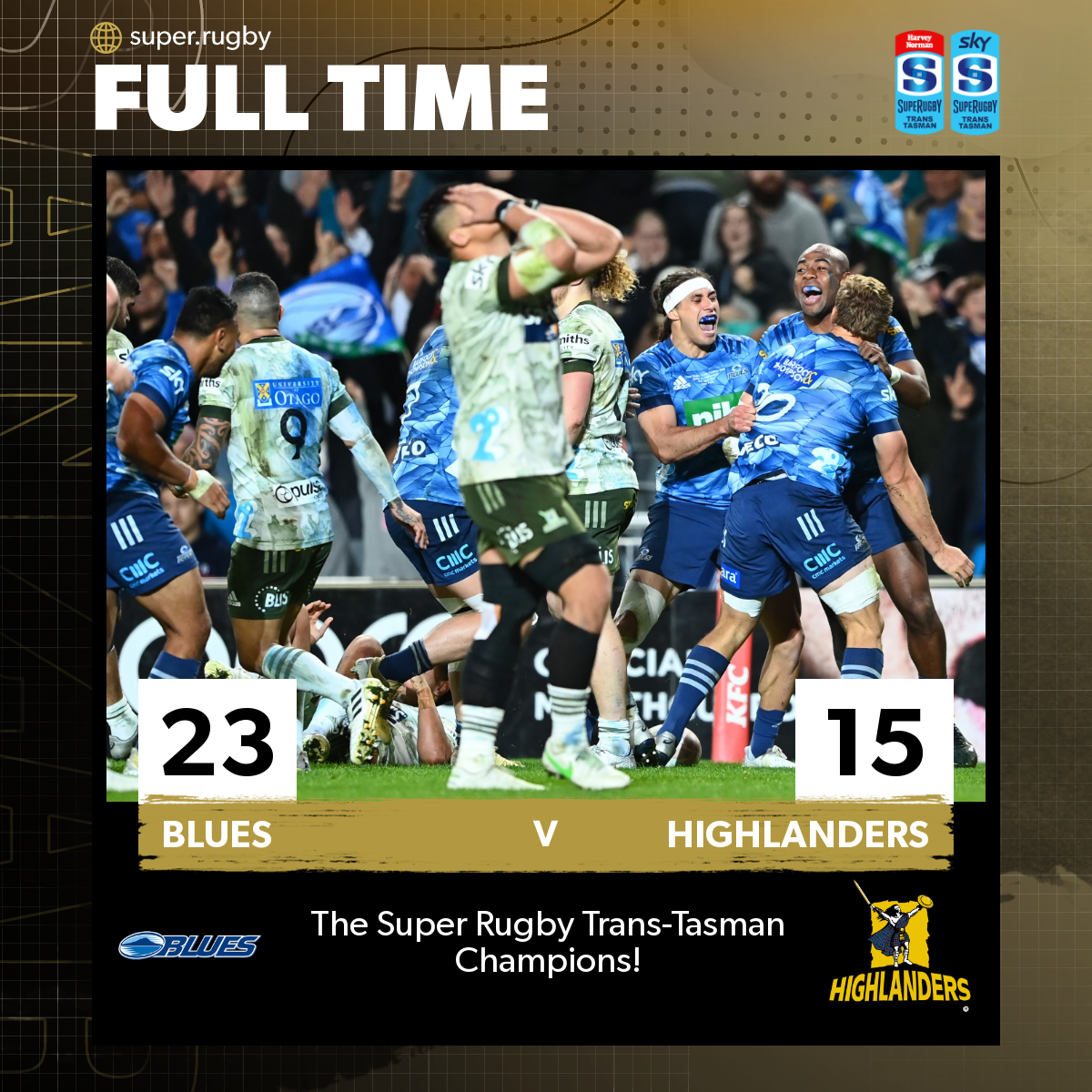