The Blues put together a dominant performance to put away the Highlanders 39-17 in their Super Rugby Aotearoa clash at Eden Park on Sunday.

The win extends the Blues unbeaten run to five games, with their set-piece being brilliant while the Highlanders will rue an error-strewn effort.

The visitors showed attacking intent early on, keeping the ball in hand and earning a penalty, which Josh Ioane slotted top open the scoring. At the other end of the park, the Blues turned down the points to attack from lineout but would knock to ball on in the ensuing drive.

But it mattered little, as minutes later the Blues recycled turnover ball quickly in the midfield to counter. All Black flyer Rieko Ioane - playing at outside centre - continued the attack and made a superb offload in the tackle to Otere Black, who scored and then converted his own try.

The home side extended their lead from a setpiece deep inside the Highlanders half. Black would send a long cut-out pass to Ioane, who shovelled the ball on to Caleb Clarke who went over in the corner.

The Blues continued their dominance, earning another offside penalty and this time opting for posts. Black obliged to take the score out to 17-3 after 27 minutes.

The Highlanders finally got their first chance to cross the line with a promising run from Jona Nareki in midfield, but the Blues did well to get back and steal the ball. A promising counter-attack would result in Reiko Ioane scoring, but a forward pass scuppered the try.

The Blues piled on the pressure and twice the Highlanders would survive the onslaught, turning the ball over on their own try line to get out of jail. But they were reduced to 14 men in the dying embers of the half as lock Josh Dickson was sent off after he took out a flying Clarke in the air.

Starting the second stanza, the Blues got the perfect start. After another soft penalty given away by the Highlanders, they set-up a powerful driving maul to gain ten metres, before they took it through the hands and replacement Emoni Narawa would go over untouched.

Minutes later, the Blues forward back rumbled over from a lineout drive, with replacement hooker Kurt Eklund falling over the whitewash. When Black added the extras, the Blues were up 29-3.

Highlanders returned the favour with the own try from a lineout drive to put some respect back into the scoreline. They would have another chance under the Blues poles, but Akira Ioane would execute a perfect steal to relieve the pressure.

Ngatugnane Punivai would then added to the Highlanders blushes. The winger failed to secure a chip over the top and Narawa snaffled the ball away and showed good speed to offload to Sam Nock, who put Harry Plummer away. Plummer was dragged down inches from the line but popped the ball of the Akira Ioane to crash over. Black added the extras to take the score out o 39-10 with 14 minutes remaining.

A cynical effort that thwarted a Highlanders attack saw Nock sent to the sideline for the remainder of the competition. The resulting penalty would see another lineout maul from the Highlanders and replacement scrumhalf Folau Fakatava would sneak over in the corner for the final score of the match. 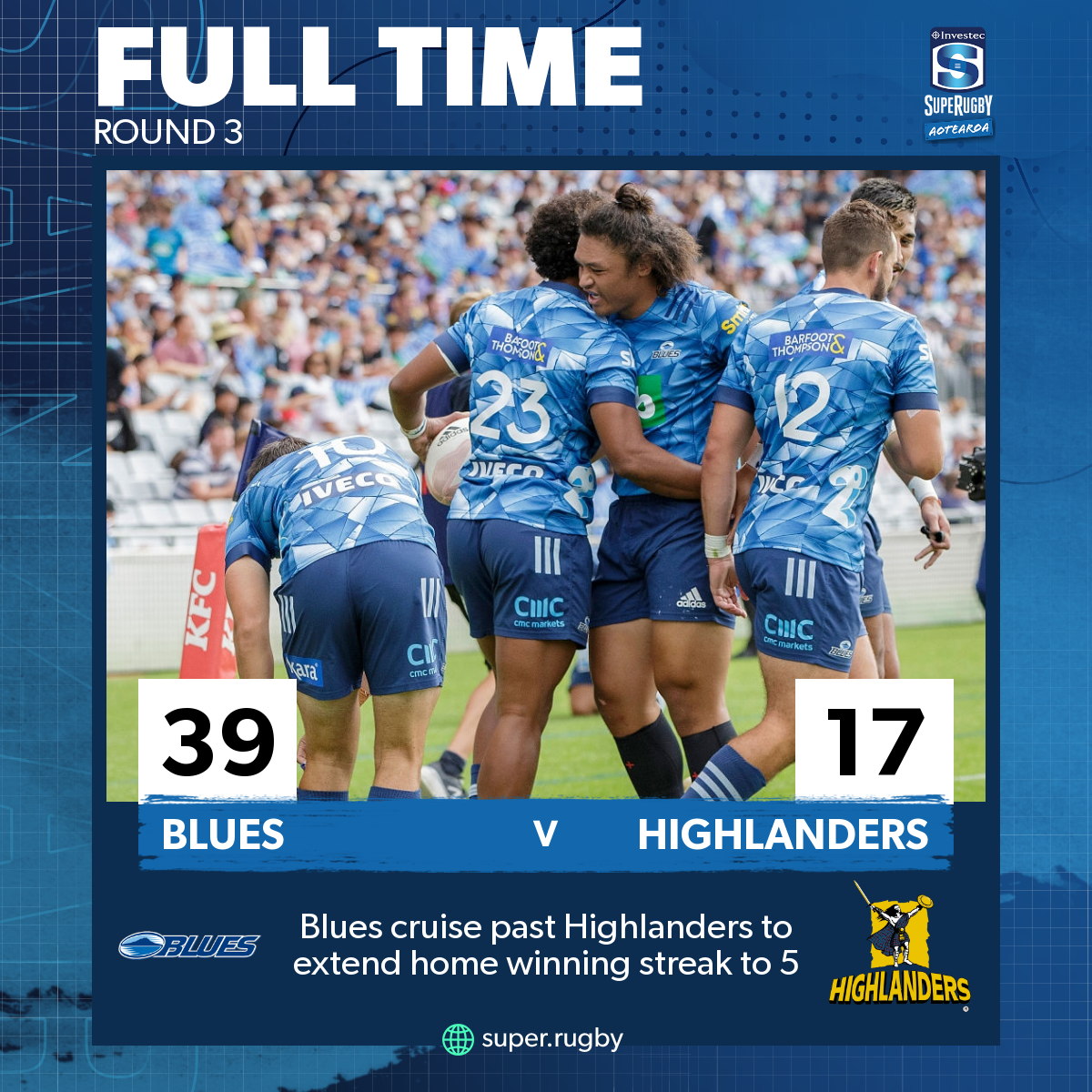