The Blues got their Super Rugby campaign back on track when they claimed a hard-fought 24-10 victory over the Sunwolves in Tokyo on Saturday.

In a tightly contested affair, momentum between the two sides ebbed and flowed although the Blues eventually took control of proceedings in the second half and outscored their hosts four tries to one to secure a deserved bonus point.

The result is a significant one for the Blues as it is only their second win of the season and ends a three-match winless streak although they are still the bottom-placed team in the New Zealand Conference. Meanwhile, the Sunwolves are still winless after seven matches and are in last place in the Australian Conference and the overall standings.

The Blues suffered an early setback when Patrick Tuipulotu was yellow carded in the third minute for a no-arms tackle on Kotaro Matsushima. The All Black lock's indiscretion also had an impact on the scoreboard as Yu Tamura slotted the resulting penalty to give the Sunwolves a 3-0 lead.

Despite spending most of the next 10 minutes in the Blues' half, the Sunwolves could not add to their points tally during Tuipulotu's stint on the sidelines.

They did extend their lead midway through the half though when Hayden Parker, who came on as a temporary replacement for Tamura, made a superb line break inside the Blues' 22 before offloading to Timothy Lafaele, who crossed for an easy five-pointer.

Parker slotted the conversion which meant the home side had their tails up with the score 10-0 in their favour.

The Blues needed a response and that came in the 28th minute when, after taking the ball through several phases in the build-up, Stephen Perofeta threw a long pass to Jordan Hyland on the edge of the Sunwolves' 22 and he did well to beat two defenders before dotting down.

Perofeta's conversion attempt struck an upright but Hyland's try boosted the Blues' confidence and they had the better of the exchanges during the half's latter stages.

The visitors could not add to their points tally though and the Sunwolves held a slender 10-5 lead when the teams changed sides at the interval.

The Blues were fastest out of the blocks in the second half and 10 minutes into the half, Akira Ioane set off on a barnstorming run down the left-hand touchline, in which he shrugged off a tackle from Lafaele and beat Kotaro Matsushima with brilliant footwork, before crossing for his side's second try.

Perofeta added the extras which meant the visitors held the lead for the first time (12-10) and they were slowly gaining the upper-hand as they had the bulk of the possession during the next 10 minutes.

And three minutes after Ioane's five-pointer, Dalton Papali’i, who came on as a replacement at half-time, crossed for a superb try. This, after he gathered a pass from Kara Pryor, just outside the Sunwolves' 22, and he showed a superb turn of speed as he beat five defenders on his way over the try-line.

The Blues continued to dominate as the half progressed and sealed their win in the 76th minute when Hyland gathered a pass from Rieko Ioane inside the Sunwolves' 22 before diving over in the right-hand corner. 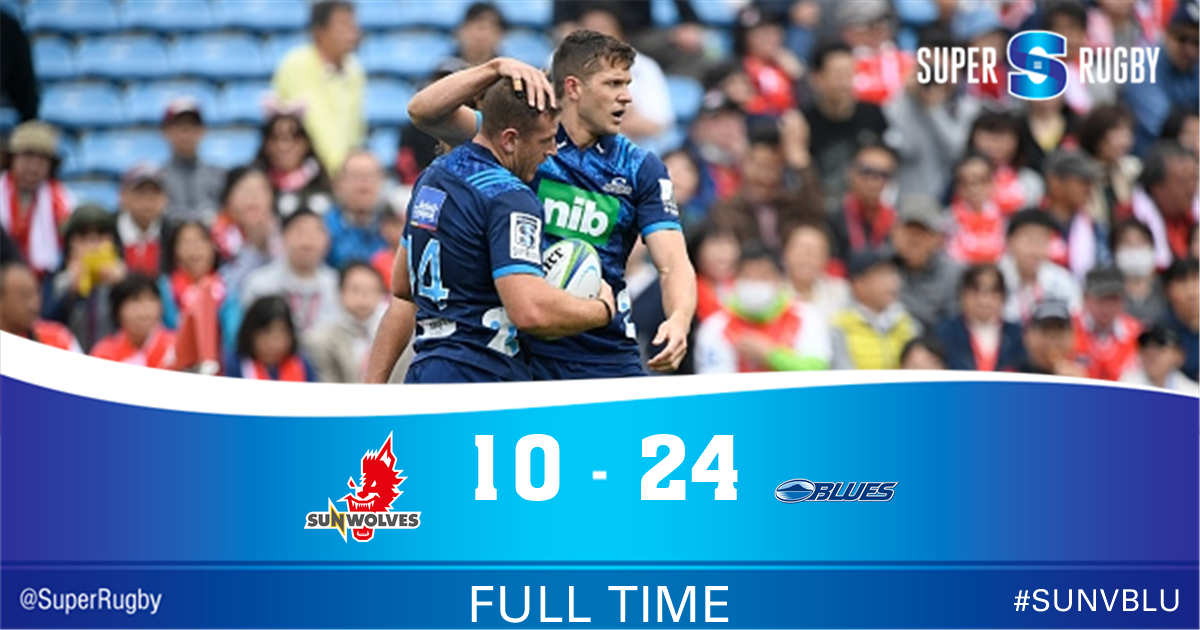