The Chiefs continued their winless run as the Blues ran out 21-17 victors in their Super Rugby Aotearoa clash in Auckland on Sunday.

With both sides employing expansive game-plans, this was another entertaining New Zealand derby filled with drama and plenty of thrilling action.

As the scoreline suggests, the home side were made to work hard for this win and they eventually outscored the Chiefs three tries to two.

For the Blues, Matt Duffie, Patrick Tuipulotu and Finlay Christie scored five-pointers while Beauden Barrett succeeded with three conversions. Lachlan Boshier and Solomon Alaimolo crossed the whitewash for the Chiefs and Damian McKenzie kicked two conversions and a penalty.

The result means the Blues return to second place in the Super Rugby Aotearoa standings – after the Hurricanes briefly held that position following their win over the Crusaders on Saturday – while the Chiefs are firmly rooted to the bottom of the table as they have lost all six their matches in the competition.

The Blues opened the scoring as early as the sixth minute thanks to a well executed try from Duffie. They attacked from a scrum close to the Chiefs’ 22 and Duffie ran a brilliant line before gathering a pass from Rieko Ioane. His pace proved too much for the cover defence and despite a desperate ankle tap from McKenzie, he crossed for a deserved try.

The home side’s dominance continued and in the 14th minute Tuipulotu crossed for their second five-pointer, from close quarters, after the ball went through 13 phases in the build-up.

Barrett slotted both conversions which gave the Blues a 14-0 lead but the Chiefs opened their account when Boshier crossed the whitewash after running onto a pass from Pita Gus Sowakula close to the Blues’ try-line.

That try boosted the Chiefs’ confidence as they were the dominant side during rest of the half but despite having most of the possession, they could not add to their points tally and the teams changed sides at half-time with the Blues leading 14-7.

The Chiefs came out firing in the second stanza and their attacking endeavour was rewarded in the 46th minute when Aaron Cruden and Anton Lienert-Brown combined brilliantly before the latter got a pass out to Alaimolo, who went over in the left-hand corner.

McKenzie slotted the conversion from close to the touchline and shortly afterwards he added a penalty which meant the Chiefs were leading for the first time with the score 17-14 in their favour.

Despite that impressive spell from the visitors, the Blues soaked up the pressure and struck back in the 54th minute when Christie spotted a gap at a ruck before diving over for his team’s third try.

That set up a tense finish and the next 25 minutes was an attritional affair as both sides battled to gain the ascendancy. The Chiefs finished stronger and spent most of the game’s closing stages camped deep inside the Blues’ half.

In the 79th minute, the hosts were reduced to 14 men when Harry Plummer was yellow carded for a professional foul close to his try-line. The visitors opted to run the resulting penalty but that proved to be a costly mistake as Sowakula was blown for holding onto the ball just short of the Blues’ try-line.

The home side cleared their lines and managed to hold onto the ball in the game’s dying moments to clinch a hard-fought victory. 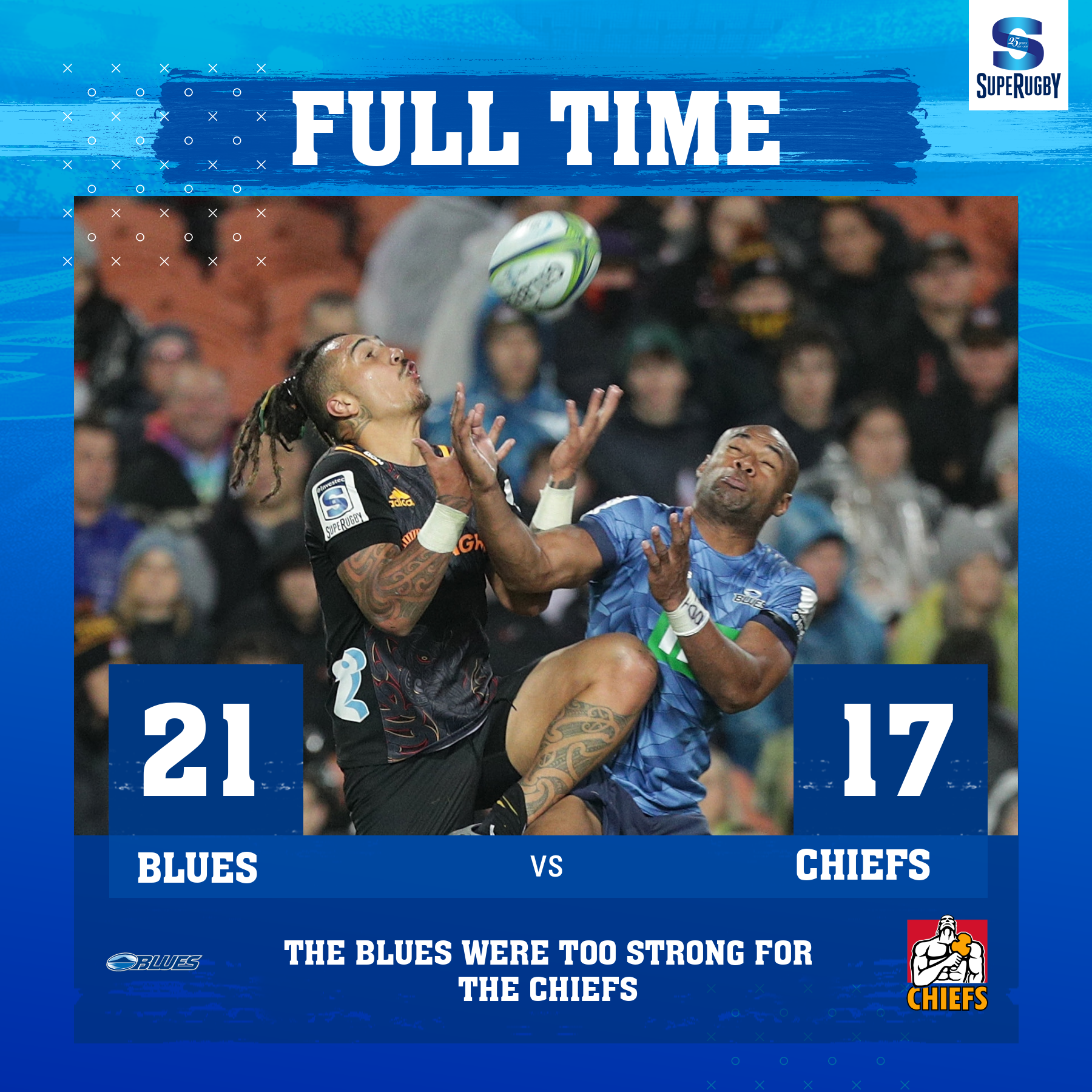