While the final scoreline suggests a dominant Blues victory, in reality, the match was a close contest right up until the final five minutes when a late penalty and converted try saw the visitors pull away.

The opening try for the Blues arrived after just three minutes when the Hurricanes, having survived an initial attack and regained possession near their own tryline thanks to an errant Blues pass, decided to throw a risky long pass of their own that went straight into the hands of Blues flanker Dalton Papalii, who only had to use his momentum to surge past one defender and run in under the posts for the score.

Not to be outdone, the Canes hit back straight from the restart, surging their way up the field courtesy of some slick passing and even slicker hands - particularly from Ngani Laumape who produced a peach of an offload - before Asafo Aumu touched down for the try. The TMO had to check that Aumu hadn't made a second movement in stretching over the line but was satisfied that the hooker hadn't been held in the tackle.

After that opening flurry of tries, the two sides seemed to lift themselves defensively, having been duly reminded of their opponents' attacking threat, and points suddenly seemed much harder to come by. A little early-season rust was also evident, with both teams struggling to maintain continuity in possession.

After a lengthy period of attrition, the Blues found themselves camped in the Hurricanes 22, leading to a series of penalties which ended with a warning for Canes captain Ardie Savea that a card might be on the way. The Blues were opting for scrums rather than kicks for goal or touch, but couldn't find a way to crack the Hurricanes defence.

When James Blackwell strayed offside to give away another penalty right after the warning, it was no surprise when referee Paul Williams pulled out the yellow card. The Blues opted for yet another scrum but this time it was the Hurricanes who earned the penalty thanks to great work at the breakdown from Savea - a big win given how long the Blues had spent camped in their 22.

From the ensuing lineout, the Blues were pinged for a high tackle and Jordie Barrett decided to go for posts, producing a beautiful kick from more than 40m out to put the Canes in front.

Moments later, the home side earned another penalty in almost the exact same position, and Barrett promptly obliged as the Canes took an 11-7 lead into half-time.

Having turned down several chances at points in the first half, the Blues did the same again early in the second when they opted to kick for touch after earning a penalty in a very kickable position. Once again it was a decision that didn't pay off when hooker Kurt Eklund couldn't find his target in the lineout.

But after nearly 40 minutes without a try, the Blues finally found a way to crack the Canes defence. There didn't look to be much on until Akira Ioane fended off Ardie Savea and ran into a large gap before offloading it to Papalii. The referee called for another penalty advantage but it wasn't needed as Otere Black picked up the ball from behind the ruck and delivered a pinpoint crossfield kick for Caleb Clarke, who only had to jog over the line to score before stepping up to convert his own try.

Moments later, the Blues went back on the attack, rumbling towards the Canes line with their rolling maul, and though it was brought down, Canes substitute Du'Plessis Kirifi was given a yellow card for cynical play in slowing the ball down. The Blues continued their onslaught, and it was a simple shift out wide that allowed Stephen Perofeta to stroll in for a second try in a matter of minutes. Black converted, as the Blues suddenly found themselves with a 21-11 advantage.

The Hurricanes needed a response and were soon camped near the Blues tryline, enjoying several penalty advantages but struggling to find the opening required to score.

The try finally came from a lineout five metres out as the Canes rolling maul split in two, with several Blues defenders pealing off to the wrong maul, allowing Aumua to charge over the line for his second try of the evening. There was controversy afterwards as Barrett's conversion attempt was called wide even though replays appeared to show it had just snuck in inside the posts.

Having not taken the points on offer all evening, a penalty right in front five minutes from time finally prompted Blues captain Patrick Tuipulotu to point to the sticks. Black made no mistake to hand the visitors a crucial eight-point lead.

The Canes went back on the attack in a final bid to change the outcome of the match, but some sloppy play saw them turn the ball over in open play and unfortunately for them the ball fell kindly to Rieko Ioane, who ran all the way from inside his own territory for the bonus-point try.

Thanks to that late onslaught from the Blues, what had been a tight contest for most of the 80 minutes ultimately turned into a convincing win for the visitors at Sky Stadium. 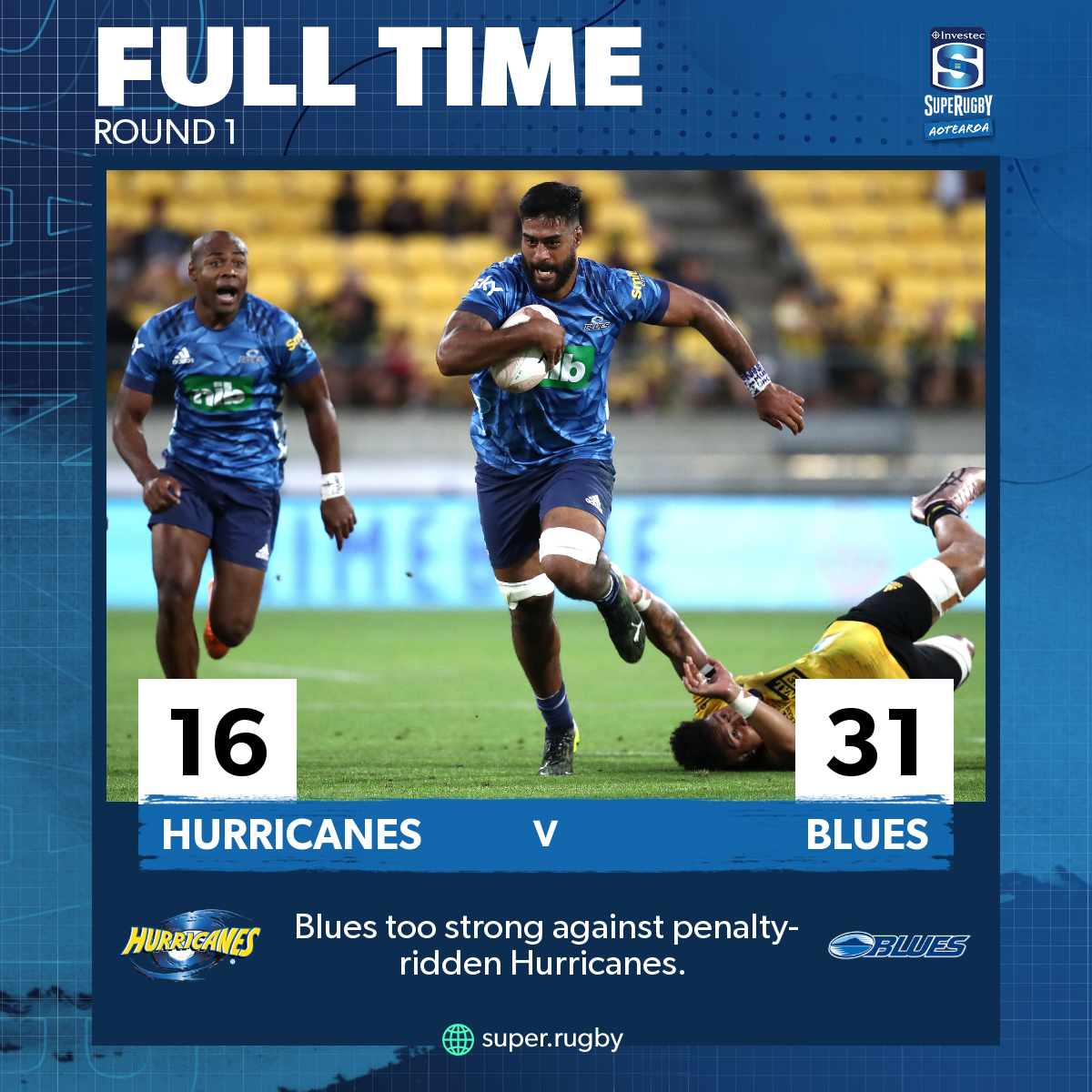