An injury-hit Reds outfit went down 31-24 to the Blues in Brisbane on Saturday, as the men from Auckland moved to the top of the Super Rugby Trans-Tasman table.

The Reds handed the Aussie contingent their first victory of the competition when they downed the Chiefs last weekend, but there was to be no repeat victory at the Suncorp Stadium on this occasion.

Late injuries to flyhalf and co-captain James O'Connor and fullback Bryce Hegarty saw the influential Reds duo replaced by Hamish Stewart and debutant Mac Grealy respectively, but despite the disruption, the home side started well and had their chances to get on the scoreboard in the opening stages, frequently finding themselves on the front foot and winning the gain-line battle.

When Stewart failed to use his arms in the tackle in the 12th minute, however, it allowed Otere Black to put the Blues ahead.

Midway through the half, a defensive error from Hunter Paisami saw Zarn Sullivan break the line and nearly score the opening try for the Blues, but the fullback was tackled into touch after regathering the ball from Bryce Heem.

Instead, it was the Reds who drew first blood when Paisami atoned for his error by putting Harry Wilson through a tiny gap in between two forwards for the score.

After a solid opening 25 minutes, however, the Reds undid all of their good work when Brandon Paenga-Amosa was yellow-carded for collapsing a driving maul near his own try line.

That led to a try for Dalton Papali shortly after when the flanker crashed over from close range, with Black adding the extras to put the Blues back in front.

And Paenga-Amosa still hadn't returned to the field when Blues winger Mark Telea cut inside and crossed for his side's second try shortly before half-time.

The match started to get away from the Reds when the Blues scored again early in the second half, a spectacular effort that saw Patrick Tuipulotu crash over after 19 phases of attack following a line-out steal inside the opposition 22. 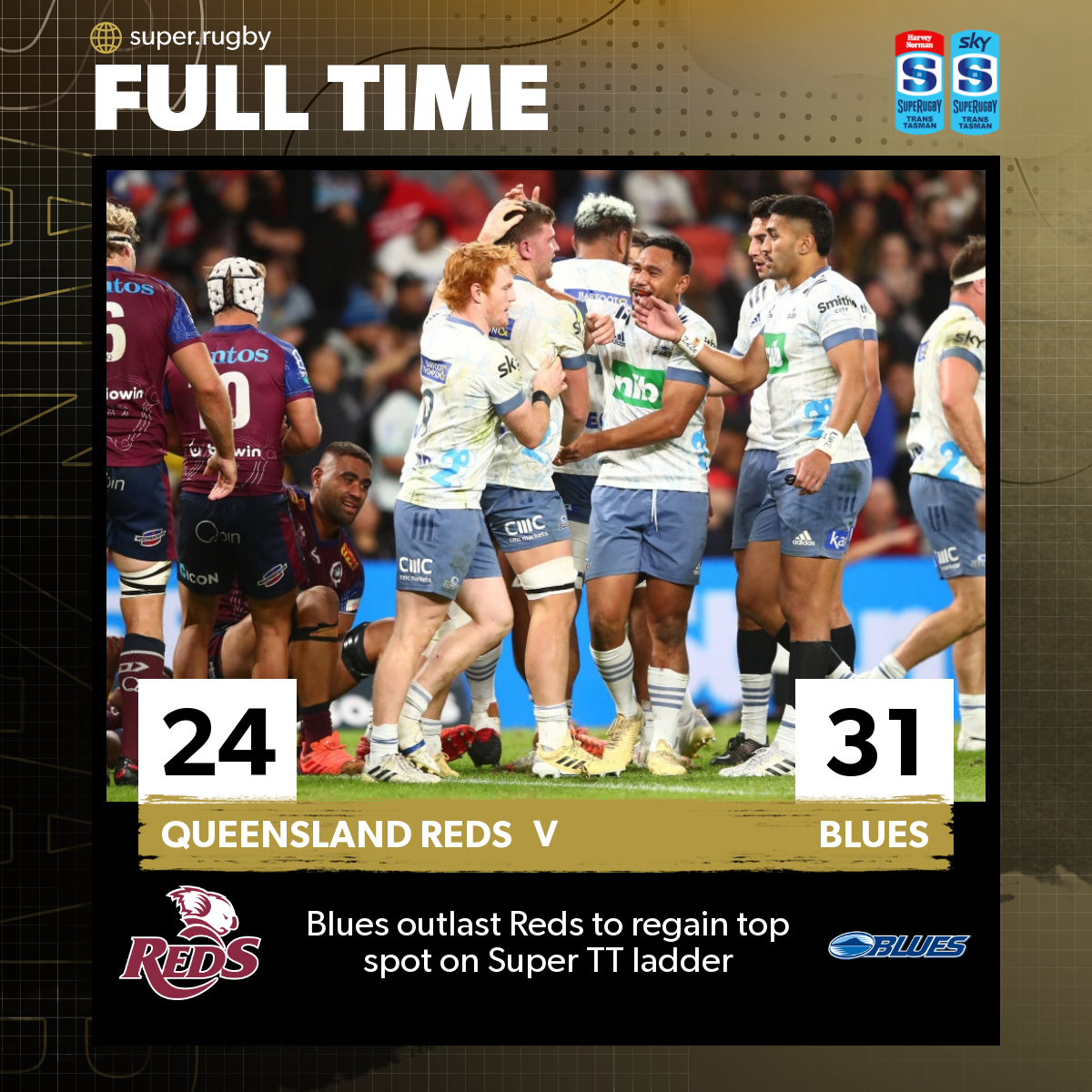 The Reds responded five minutes later when Paenga-Amosa picked up a loose ball that had squirted out of a ruck near the Blues line and flopped over for the score, with Henry adding the extras to bring the home side back to within 10.

But the Blues soon regained their 17-point advantage when Finlay Christie responded with a classic sniping scrum-half try from the back of a ruck.

Both teams cleared their benches in the final 25 minutes, leading to a brief lull in the scoring, but with little less than 10 minutes to go, the Reds gave themselves hope of a possible late fightback when Filipo Daugunu caught a well-placed crossfield kick to score their third try.

But there wasn't enough time for the Reds to claw back their lost ground, despite Daugunu converting a late penalty kick to give them one final roll of the dice to try and force a draw.