The Reds maintained their slim chances of reaching the quarter-finals with a last-gasp 29-28 win over the Blues at Suncorp Stadium.

The teams traded tries throughout the back-and-forth encounter but it was Scott Higginbotham's 77th minute try and Bryce Hegarty's subsequent conversion that would ultimately decide the tie.

Hegarty added another seven points with the boot and also crossed the line once to score a try of this own in a stellar display from the flyhalf.

There were bonus points aplenty as both sides scored four tries.

It looked like it was going to be one-way traffic early on as the Blues dominated proceedings from the kickoff.

The pace at which they were playing was too much for their hosts to handle and they were cutting holes through the defense seemingly at will.

The exclamation point came just three minutes into the match as Blake Gibson picked the ball up from the back of a ruck close to the line and bundled over. Otere Black added the extras to give them an early 7-0 lead.

Even on defense the New Zealanders looked infallible and attempts by the Reds to fight back into the game were repeatedly repelled.

Their forwards were also dominant, which showed in how well the Blues were winning the tactical kicking game. Most of the first 20 minutes felt like they were being played in the Reds 22.

They picked up a second try in the 18th minute to really assert their dominance. Akira Iona counter-attacked from a poor kick by the Reds and drew in the last defender before off-loading expertly to Tanielu Tele'a, who raced into the open space and over the line. Black again added the extras.

The home side finally found a way back into the game around the 21st minute through none-other-than Higginbotham. He was set up beautifully by Samu Kerevi, who handed a man off and gave a cute little chicken-wing pass to the send the forward over the line.

The frantic first half action continued with Augustine Pulu dotting down for the Blues less than 60 seconds later, which Black converted. Then around the half hour mark Taniela Tupou hit back once again for the Reds

Bryce Hegarty's conversion attempt was successful, and added a penalty goal just before half time to bring the scoring to 15-21 to the Blues at the break.

Hegarty scored and converted his try immediately after half time, which put the Reds into the lead for the first time in the game.

A superb break by Pulu saw him over the line to complete his brace and the conversion from Black restored their six-point lead.

However, Dalton Papalii was sent off for the Blues in the 71st minute for an infringement at ruck time and the Reds pounced on their numerical advantage.

Higginbotham showed a winger's pair of heals when he received the ball out wide and burned down the wing to score his second try of the game.

Through the jubilation, Hegarty held his composure superbly to slot the kick to hand the Reds a dramatic and vital 29-28 Super Rugby win. 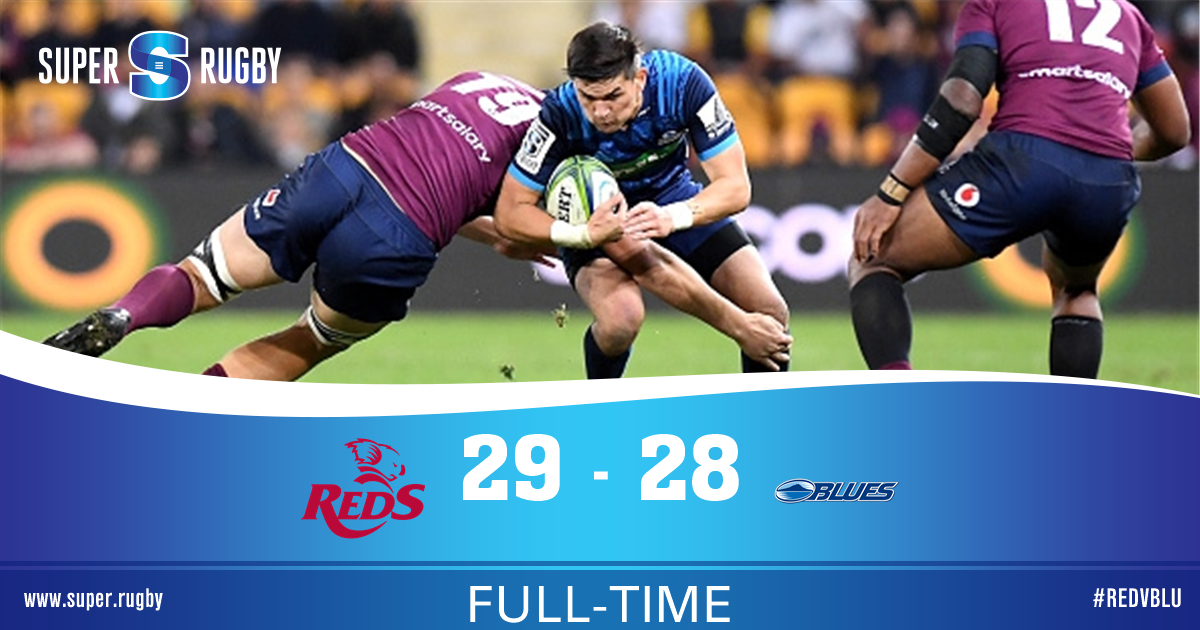