Blues win a nail biter over the Highlanders

The Blues sealed their third straight victory in Super Rugby Aotearoa with a nail biting 27-24 triumph over the Highlanders at Eden Park.

Following a comfortable first half for the Aucklanders which saw Caleb Clarke, Dalton Papalii and Rieko Ioane cross the whitewash, they were made to work much harder by the Highlanders in the second period.

Ash Dixon had touched down for the ‘Landers in the opening 40 minutes, but they did not find any fluidity until after the interval. But quick-fire tries from Mitch Hunt and Shannon Frizell both went over to remarkably give them the lead after 53 minutes.

However, the hosts would continue their fine run when Papalii scored his second try of the evening to snatch yet another win.

Facing a side confident and on form, it was always going to be a difficult task for South Islanders and it initially went to script as the hosts opened the scoring early on.

The try came from Clarke, a young wing that has taken time to show his outstanding talent in the XVs game. After starring as an 18-year-old in the 2017 World Rugby U20 Championship, many expected him to explode on to the Super Rugby scene in 2018, but it has taken two years for the back-three player to become a genuine threat at senior level.

He was magnificent in the opening period, touching down by weaving his way over from close range. The Highlanders responded via Dixon’s try before the respective flyhalves traded penalties, but the hosts soon asserted their authority when Scott Gregory’s attempted clearance was charged down by Hoskins Sotutu.

It was an abysmal decision from the young fullback, who took his time before deciding to kick, and it duly cost his side seven points. After Sotutu had blocked the punt, Papalii was on hand to claim and cross the whitewash for a 17-10 advantage.

Matters soon worsened for the visitors as the Blues scored their third try, and once again it was that man Clarke who made the decisive act. Receiving the ball just outside his own 22, the winger stepped his way past two would-be tacklers and found Ioane, who used his express pace to finish.

With 12 points the difference at the break, it was a big job for Aaron Mauger and his coaches to inspire their charges, but their words evidently did the job as the Highlanders controlled the opening 10 minutes of the second half.

Mikaele Tu’u was magnificent while halfbacks Aaron Smith and Mitch Hunt controlled the game superbly. They may not have the star power in the outside backs that their North Island opponents do, but the 2015 Super Rugby winners played to their strengths.

They put pressure on the Blues and were rewarded when Hunt spotted a gap and surged his way over to reduce the arrears to 22-17.

Mauger’s men continued to dominate and almost scored once more when Hunt’s excellent pass saw Jeff Thwaites charge clear. The prop was stopped short but, under pressure, the Aucklanders infringed, and Rieko Ioane was sent to the sin-bin.

Down to 14 men, the Blues conceded for the second time in quick succession when Frizell touched down.

But the home side would hit back through another Highlanders error. Once again, Gregory was partially at fault, failing to take a high ball and allowing Leon MacDonald’s charges to gain some much-needed territory.

They earned a five-metre lineout and Papalii was on hand off the back of the maul to cross the whitewash and regain their lead.

It was one they would not relinquish again, although the Blues were indebted to Sotutu, whose late defensive intervention five metres out secured the win. 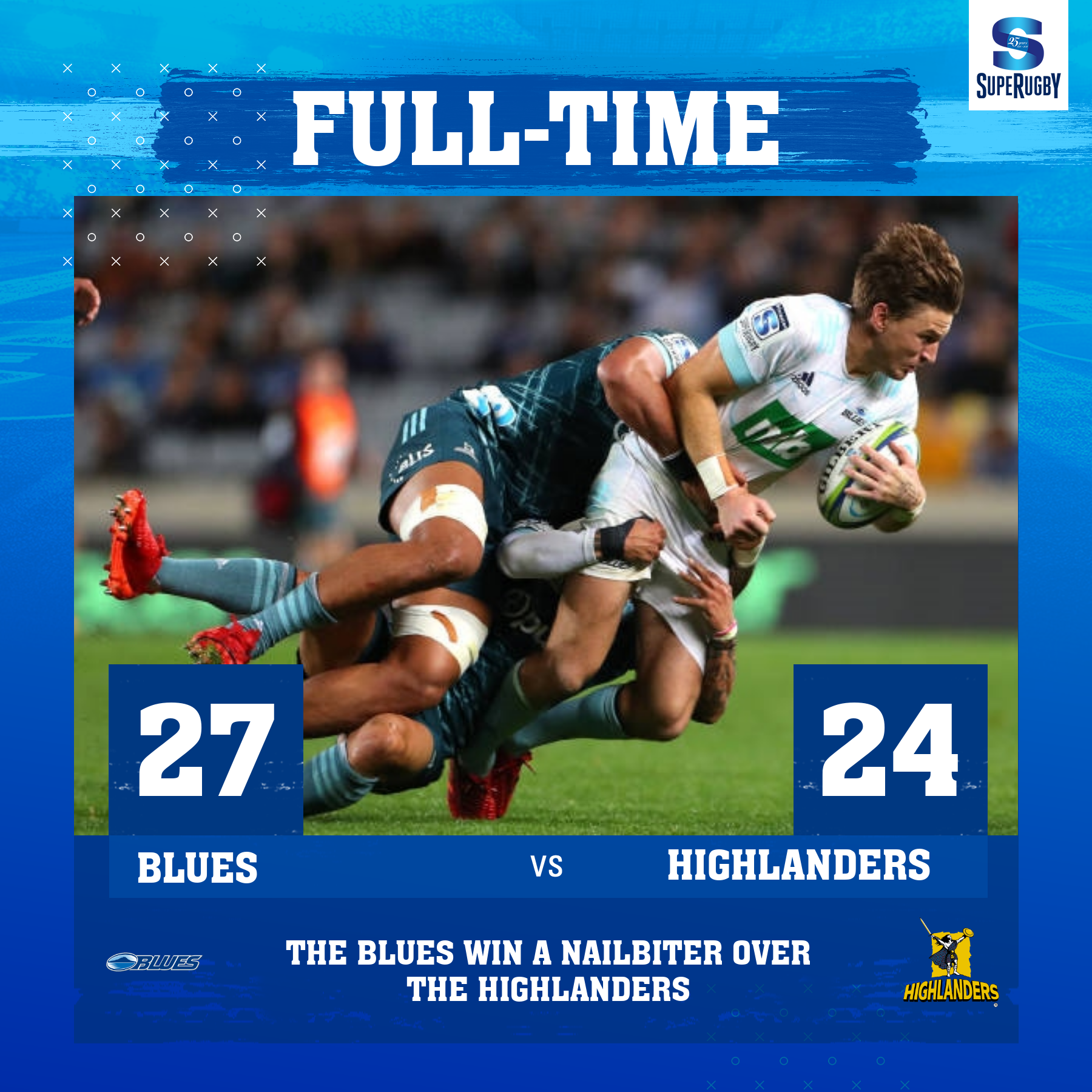