The Reds claimed their third victory of the Super Rugby season on Saturday as they beat the Rebels 29-24 in an entertaining derby in Melbourne.

Tries for the Reds from Samu Kerevi, Eto Nabuli and Stephen Moore were countered by three Reece Hodge penalties which gave the visitors a 17-9 lead at the interval.

The win moves the Reds into second position on the Australian Conference table, two points ahead of the Waratahs who have played one match less.

Although the Rebels should be commended for launching a superb second-half fightback, the men from Brisbane were the more enterprising side and eventually outscored their hosts by five tries to two with Kerevi sealing their win with his second try in the game's closing stages.

The Rebels opened the scoring as early as the second minute via a Hodge penalty after George Smith infringed at a ruck but the visitors struck back with Kerevi's try shortly afterwards.

This, after Quade Cooper got a long pass out to Eto Nabuli deep inside the Rebels' 22 and the flyer did well to throw an inside pass to his captain who got over the whitewash untouched.

Cooper failed with the conversion attempt and five minutes later Hodge slotted his second penalty which meant the Rebels led 6-5 after 10 minutes.

The Reds suffered a setback midway through the half when Karmichael Hunt was sent to the sin bin for slowing the ball down cynically at a ruck close to his side's try-line.

But despite being reduced to 14 men, they continued to attack and they were rewarded in the 26th minute when Nabuli dotted down after Smith, Cooper and Scott Higginbotham laid the foundation in the build-up.

Cooper added the extras and two minutes before half-time, Moore crossed for the visitors' third try from the back of a driving maul deep inside the Rebels' 22.

On the stroke of half-time, Hodge landed his third penalty which meant the Rebels were still very much in the game although they were trailing by eight points on the scoreboard.

Three minutes into the second half, Hodge added his fourth penalty after Smith strayed offside on defence.

Shortly afterwards, the Reds pounced on a poor clearance kick from Sefa Naivalu and Scott Higginbotham had a clear run down the left-hand touchline before crossing for his side's fourth try.

Five minutes later, Tom English set off on a mazy run deep inside the Reds' half and managed to free his arms in contact to offload to Will Miller who crossed for the Rebels' opening try.

The Reds thought they had crossed for another try when Hunt dotted down in the 65th minute but his effort was disallowed when television replays revealed that Smith had delivered a forward pass in the build-up.

Four minutes later, the Rebels struck back when Marika Koroibete crossed for his side's second try, despite the attentions of two defenders. and with the score level at 24-24, the match was set for a thrilling finish.

Higginbotham had a chance to clinch the result for the Reds but failed to gather a Nick Frisby cross-field kick while crossing the whitewash in the 74th minute.

Kerevi spared his blushes when he showed great determination before crossing for the matchwinning try in the 80th minute. 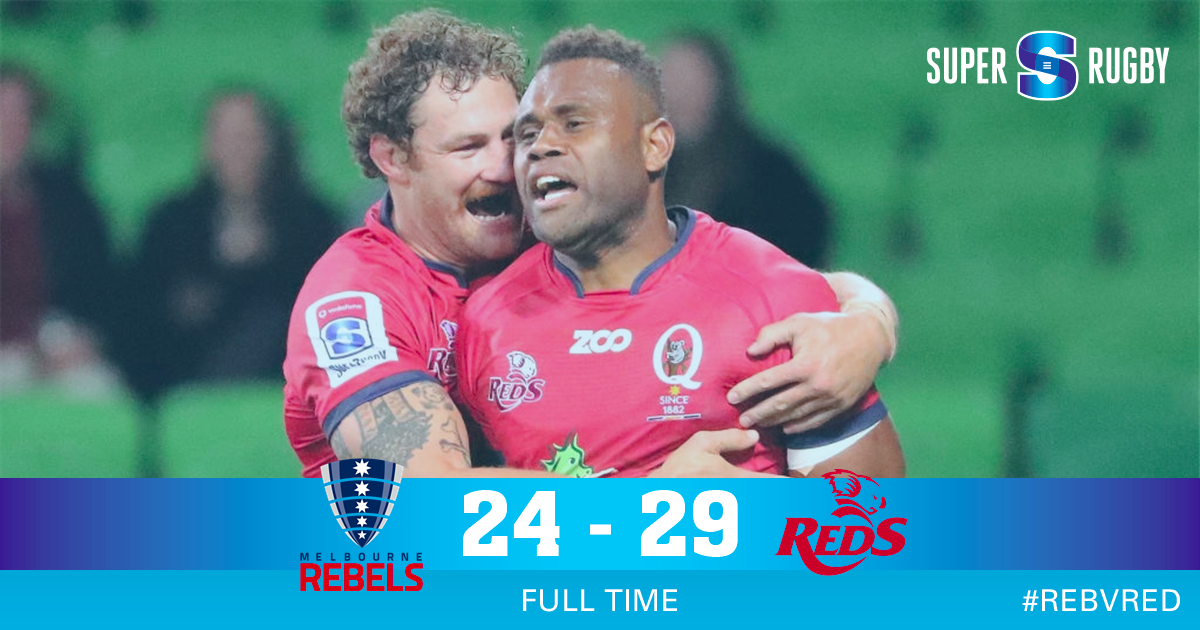