The Jaguares made it five wins in a row in Super Rugby as they beat the Bulls 54-24 in a bonus-point victory at Estadio Jose Amalfitani.

Five points takes the Argentines into outright second in the South African Conference, above the Sharks, and into the play-off positions.

For the Bulls this loss sees them drop off the pace in the Conference, with Warrick Gelant, Nic de Jager and Andre Warner their try scorers.

The Jaguares went into the interval leading 20-10 thanks to two tries as they looked full of confidence after their exploits on the road.

They thought they'd crossed on two minutes when Agustin Creevy dotted down but the TMO spotted he had knocked on in attempting to gather.

However they wouldn't have to wait long for the try to come as fast hands out to the right wing led to recycled ball and fly-half Sanchez hit a smart line off his scrum-half to go over. The number 10 added the conversion and the Jaguares had the 7-0 lead they richly deserved.

The Bulls though hit back when Manie Libbok found Gelant who cruised over for the try that, with Handre Pollard's kick, tied the game up.

Sanchez would then slot two penalties before full-back Boffelli was wayward with a long-range attempt. Pollard hit back to make it 13-10.

But just before the half ended the Jaguares struck a vital blow as Sanchez went blind and found Delguy who finished superbly on the right.

The second period was one-way traffic in favour of the Jaguares as Sanchez's early penalty was followed up by Kremer crashing over after Boffelli's initial line break. The Bulls were very much on the ropes at 30-10 down after Sanchez knocked over yet another successful kick.

The fly-half then set up Degluy for his second try when he fired a flat pass out to his right wing, with the scoreline now up to 37-10.

The Jaguares were motoring and their fifth try would come on 62 minutes as Jeronimo de le Fuente's line break was finished off by Orlando.

It took until the 70th minute for the Bulls to register their first points of the second period and it came via De Jager at the back of a driving maul. However, that was soon chalked off by another Jaguares crossing, with Cancelliere handed an easy run-in that made it 47-17.

There was still time for a further try apiece though as first Warner dotted down for the Bulls before Boffelli deservedly added the gloss late on to seal another impressive triumph for the Jaguares. 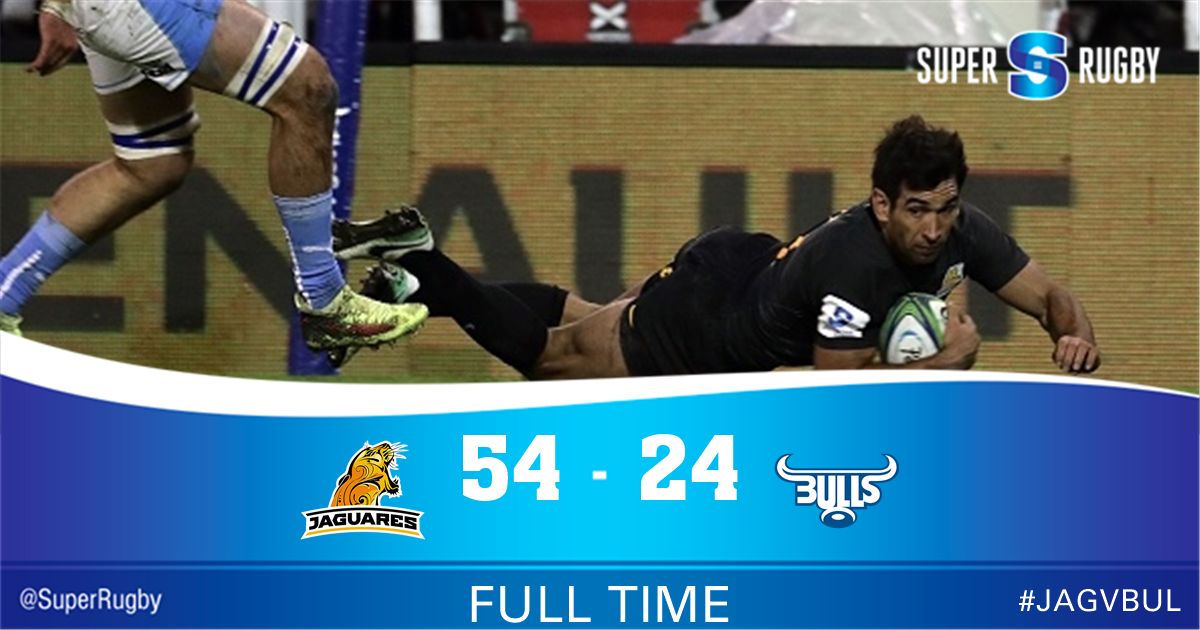