Jordie Barrett scored all the Hurricanes points as they dominated the Highlanders in their Super Rugby Aotearoa clash on Friday, winning 30-19.

There was an electric atmosphere under the closed roof of the Forsyth-Barr Stadium, but unfortunately, the home side could not convert that energy into points on the board.

The Hurricanes dominated the opening minutes, marching the Highlanders down the park with penalty after penalty. After Jordie Barrett opened the scoring with three points of the tee, it was his chance to shine with ball in hand.

Dane Coles fed the lineout from 5m out, faked the drive and moved the ball quickly out the back through the hands. Flyhalf Orbyn Leger provided an accurate ball to Barrett at pace and he got outside his man to score in the opposite corner. He added the extras and the visitors were up 10-0 after nine minutes.

The Highlanders almost scored at the other end of the field, but Shannon Frizell - who was full of running all night - lost the ball as he attempted to ground it over the line. They were under advantage so they had another crack, but miscommunication in the midfield saw them turn the ball over after an obstruction, cueing a groan from the Dunedin crowd.

Waves of Highlander attacks would result in Tyrel Lomax being shown a yellow card for a side entry. But even after seven minutes camped on the try line, the hosts would again let the opportunity slip, with Coles stealing the ball at the breakdown to give the Hurricanes some respite.

The Hurricanes scrambled in defence one again after an excellent break from Mitch Hunt and an even better pass to winger Freedom Vahaakolo, who looked for all money that he would go over in the corner. But a great tackle from Barrett would lead to another steal on the line.

Highlanders finally got their reward 34 minutes in after a good old fashioned ten-man maul from the lineout. Lock Bryn Evans was awarded the try and Josh Ioane slotted the conversion to make it 10-7.

Back to their full complement of 15 men, the Hurricanes enjoyed a rare period on offence in the dying embers of the opening stanza after the Highlanders failed to clear the ball. A stagnant attack was given life when they came against the grain, with winger Salesi Rayasi finding a half gap and offloading to Barrett who cantered over untouched under the poles.

A dejected Highlanders outfit jogged down the tunnel 17-7 down at half-time despite having all the territory and possession.

Unfortunately for the home side, it didn't get much better in the second half. Early on, a rudimentary handling error from Hunt gave the Hurricanes a midfield scrum, off which Ngani Laumapi made good metres. Again they would use a switch play with Rayasi offloading to that man Barrett on the angle, who crashed over for his third try of the night.

Barrett continued his absolute domination of the scoreboard with another 50 plus metre bomb to take the score out to 27-7 in the 54th minute.

Sustained pressure from the Highlanders attack would lead to their second try. A quick tap from All Black Aaron Smith and slick movement out wide would see Connor Garden-Bachop go over in the corner.

The Hurricanes defence would nullify most of the Highlanders remaining energy on attack until an inspired effort from replacement Thomas Umaga-Jensen, who glided over in the 77th minute for a consolation try.

Fittingly, Barrett would have the final say of the match with a last-minute penalty to take his tally to 30 points, a record points haul in Super Rugby Aotearoa. 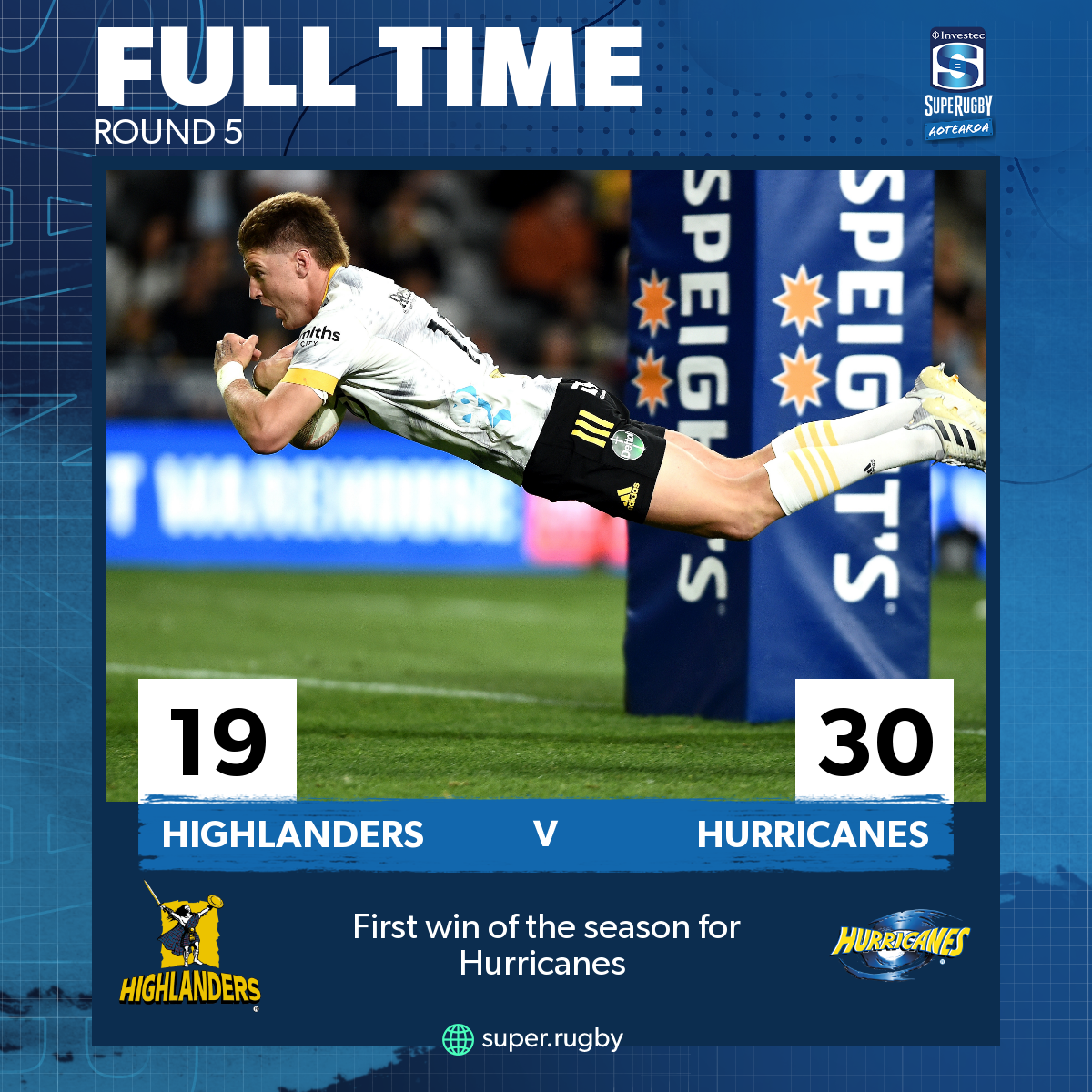