The Brumbies produced a more disciplined performance to beat the Waratahs 19-13 in Friday's Australian Super Rugby derby at the Canberra Stadium.

The Tahs were the first to score, although they got a bit lucky with their opening try, which arrived in just the third minute of the match.

It was an early shot at goal from Bernard Foley that created the opportunity, as the ball hit the uprights and bounced back into the field of play, allowing flanker Michael Hooper to jump highest and collect the ball before crashing over the line.

Foley's attempt to add the extras hit the upright again, as the visitors emerged from the chaos with a 5-0 lead.

It didn't take the Brumbies long to hit back, however. Some good interplay between the backs and forwards saw them advance up the field, and when referee Glen Jackson awarded a penalty, they opted for an attacking line-out close to the Waratahs tryline.

The ball was won and the maul was set up, and it took just three phases before hooker Folau Fainga'a found himself in possession with the tryline in sight, and there was no stopping the No 2 from there.

Christian Lealiifano added the extras, as the Brumbies took a 7-5 lead with 14 minutes played.

Eight minutes later, the home side had their second try of the evening. Eighth man Lachlan McCaffrey provided the unlikely spark when he picked up the ball on the halfway line and kicked the ball over the Waratahs defensive line, forcing Jack Gordon to run the ball into touch and hand the Brumbies an attacking line-out.

That led to another rolling maul, which rumbled all the way to the tryline and over for a five-pointer, with Fainga'a emerging from the bodies with the ball in hand for his second try of the evening.

Tahs' front rower Sekope Kepu then found himself sin-binned in the 35th minute after the TMO spotted a dangerous clean out. The visitors had been awarded a penalty but the decision was reversed as they found themselves reduced to 14 men.

Luckily for the Waratahs, they were able to avoid conceding any further points during Kepu's absence, and nine minutes into the second half they reduced the deficit to just two points thanks to some individual brilliance from Israel Folau.

After the ball was moved through the backline to the No 15, he produced a burst of speed to beat two defenders before popping a clever back-of-the-hand pass to winger Alex Newsome, who dotted it down in the corner for his side's second try.

But the Waratahs joy was short lived as they suffered a double-blow in the 54th minute. Not only did referee Jackson award the Brumbies a penalty try after a rolling maul was cynically brought down just shy of the line, but he also sent front rower Harry Johnson-Holmes to the bin for being the main offender.

The Brumbies now led 19-10, which became 19-13 in the 64th minute when Foley managed to convert an impressive penalty from 40 yards out on the angle.

Try as they might, the Waratahs could not close the gap any further, and if any side was going to score again it would have been the Brumbies, who held on for the deserved victory. 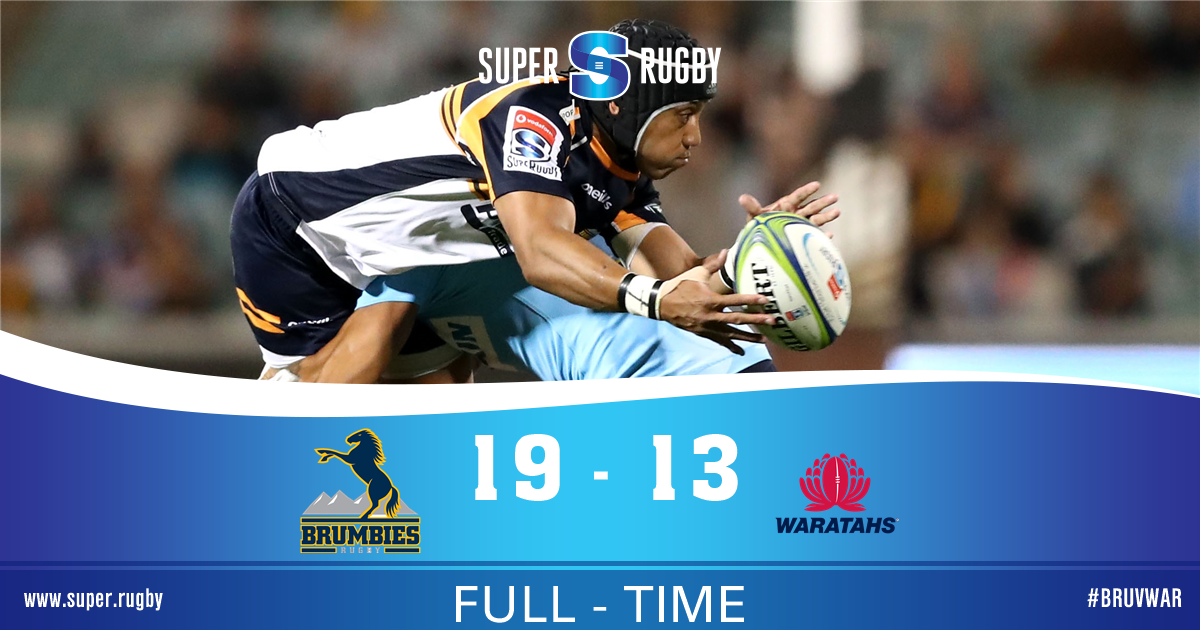